Who needs period charm when you have these ideas? 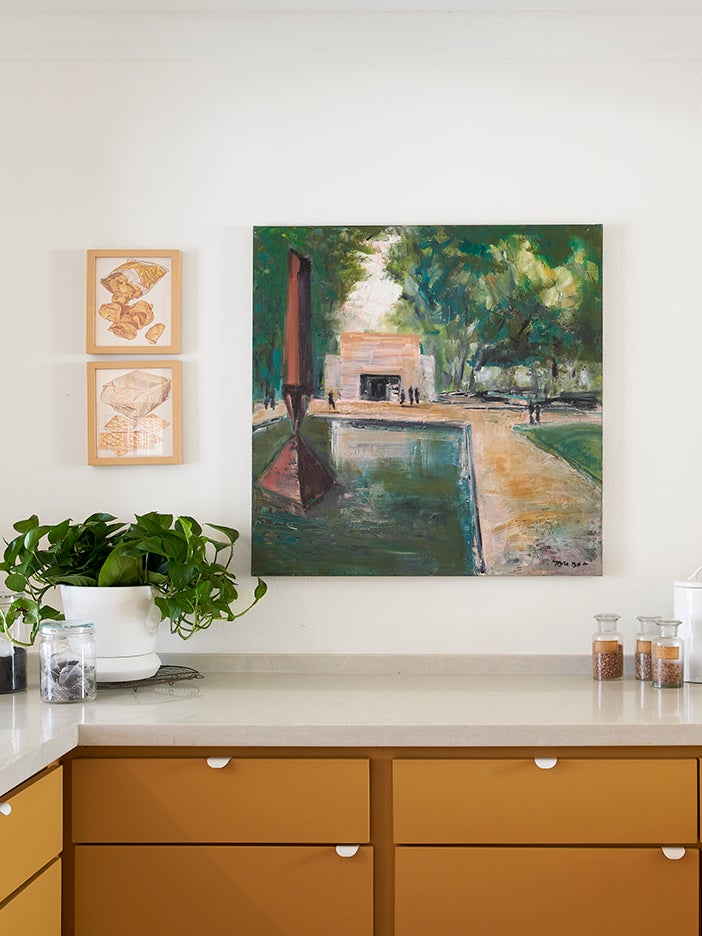 Gin Braverman was charmed at first sight when she toured the historic Houston mansion that would soon become La Colombe d’Or Hotel. The imposing early-20th-century building welcomes you with a winding grand staircase and original parquet floors that have all the pomp and circumstance of the Roaring Twenties. The ’70s garden bungalows (which the interior designer was asked to overhaul), however, sorely lacked that period luster.

“They were cobbled together in the ’80s,” she says, with lots of shiny brass railings, orange-tone wood floors, and bad wallpaper. Turning to the original Colombe d’Or in Provence, France—a famed institution frequented in the ’50s by artists like Miró, Chagall, and Calder—for inspiration, Braverman decided that clever paint treatments would be her secret weapon to bring the long-term-stay suites back to life. “Montrose, where the hotel is located, is a very eclectic, dynamic, diverse neighborhood, so we wanted to bring this bohemian artist vibe to the property,” she explains. Here’s how Braverman painted the rainbow throughout the nine bungalows—and used every trick in the book.

The most challenging bungalow—“It was the only one with terracotta floors instead of hardwood,” the designer remembers—was the crowd favorite in the end. “I pivoted to a more Southwestern vibe,” says Braverman, landing on Farrow & Ball’s Setting Plaster to cover the main living area. Instead of painting the walls from floor to ceiling, though, she opted to stop about 2 feet short of the low ceilings to make them feel taller.

Because the entryway, living room, and dining area in each unit are all one open space, Braverman had to figure out how to demarcate each without the help of walls. Rounded corners—a cue pulled from the adjacent kitchen’s wallpaper—did just that in this bungalow. “It’s a little more mod and feels more intentional than just a square edge,” she explains.

Every unit has a tiny lounge off the main living space, which Braverman believes was once a sunporch that was later enclosed. The designer decided to embrace their quirkiness and treat the rooms differently from the rest. In the terracotta-tiled bungalow, this meant half the walls (along with the French doorframes, the one architectural element) were painted in Farrow & Ball’s Picture Gallery Red, while the other half stayed Setting Plaster for a modern take on traditional wainscoting.

Cozy Up a Bare-Bones Room

In a different bungalow, Braverman created the same effect but in an unusual palette: navy and black. “We didn’t want the break to be so strong, because we felt it should be very moody to go with the dark floors,” she says. The designer started with her all-time favorite paint color—Farrow & Ball’s Hague Blue—then landed on the British brand’s Black Blue for the upper half, which she wrapped onto the ceiling to carry on the cozy vibes.

Give Strange Alcoves a Purpose

Another kitchen had an awkward nook at the back where the fridge and stove live. By pulling the yellow cabinet color into the area, it gave the space a jolt of color so it appeared more intentional. “We were just trying to make it look less weird, because when it was painted white it appeared forgotten,” says Braverman. The best part? The designer didn’t plan any of these color moments in advance: “It all felt very intuitive.”