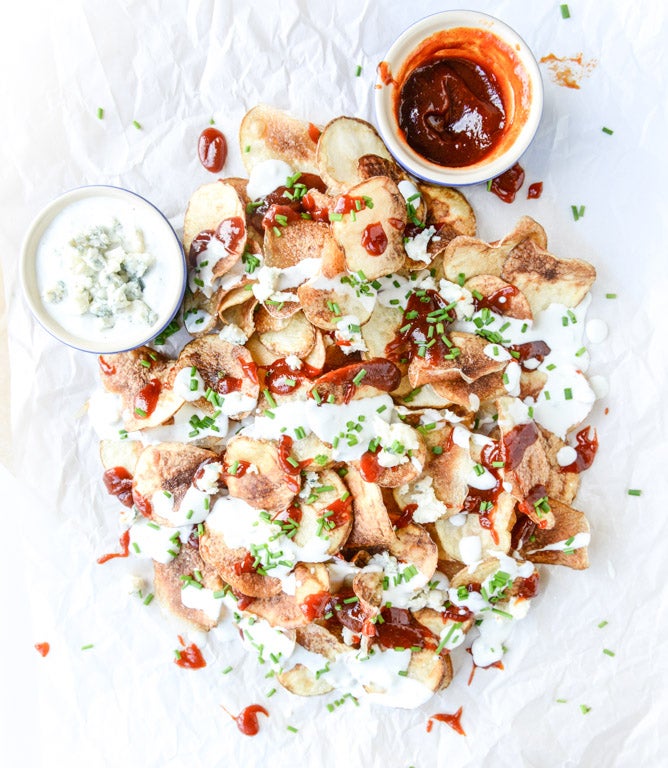 Photography courtesy of How Sweet Eats

If there’s ever a time to bring your A game in the kitchen, it’s when you’ve got a crowd of excitable sports fans gathered around your living room TV. All that cheering works up an appetite. That’s where you come in, with addictive snacks, cheesy goodness, classic comfort food—anything that’s made for grazing will go over well. We can’t make any promises about which team will win this year, but we can ensure you’ll be the MVP of your tailgate if these eight decadent appetizers are on the menu.

The only thing better than a sweet and salty dish like this is when it also happens to be crispy. Joyful Healthy Eats‘s recipe elevates bacon-wrapped fruit by adding brown sugar and balsamic vinegar. The small bites will go down like candy.

This riff on Mexican elotes isn’t just for summer barbecues. Instead of using creamy mayo, the medley by Lakeshore Lady relies on chives, cilantro, avocado, and husked corn for texture. It’s a bright pick-me-up when the score is down.

Do you know what pairs really well with that beer? Homemade chips drizzled in blue cheese yogurt dressing and a vanilla bourbon barbecue sauce. (How Sweet Eats went to town with the sriracha for an extra kick.) The trick is to shower them in coarse sea salt while they’re still warm.

This dish is the ultimate finger food. The puff pastry—which is filled with fresh baby spinach, pancetta, Gorgonzola, and chopped artichoke hearts and lightly dusted with Trader Joe’s Everything But the Bagel seasoning—is made to be pulled apart.

Half Baked Harvest’s twist on this game-day staple is a smidge healthier and much tastier than the fried version. (Psst: They only look like wings—they’re actually chicken breasts cut into pieces, breaded, baked, and covered in sauce.)

Bring the street food of Bangkok to your kitchen table with these charred chicken thigh skewers, doused in spiced coconut milk and served with a sweet-and-sour dipping sauce made of shallots and chilies.

Seasoned with ginger, garlic, and cilantro, this app by Melanie Makes is as straightforward as it gets: The coating calls for five ingredients and the meatballs only need to bake for 20 minutes (or until browned).

Taquitos are ideal for a rowdy crowd (technically you don’t need a plate to eat one). A Couple Cooks landed on a vegetarian filling for this recipe, made up of refried beans, cheese, and salsa. Nachos, you’ve been one-upped.

See more stories like this:  16 Recipes to Ensure a Winning Super Bowl Party 9 Green Recipes That You’ll Actually Want to Eat What Foodies Make After They’ve Indulged All Holiday Season