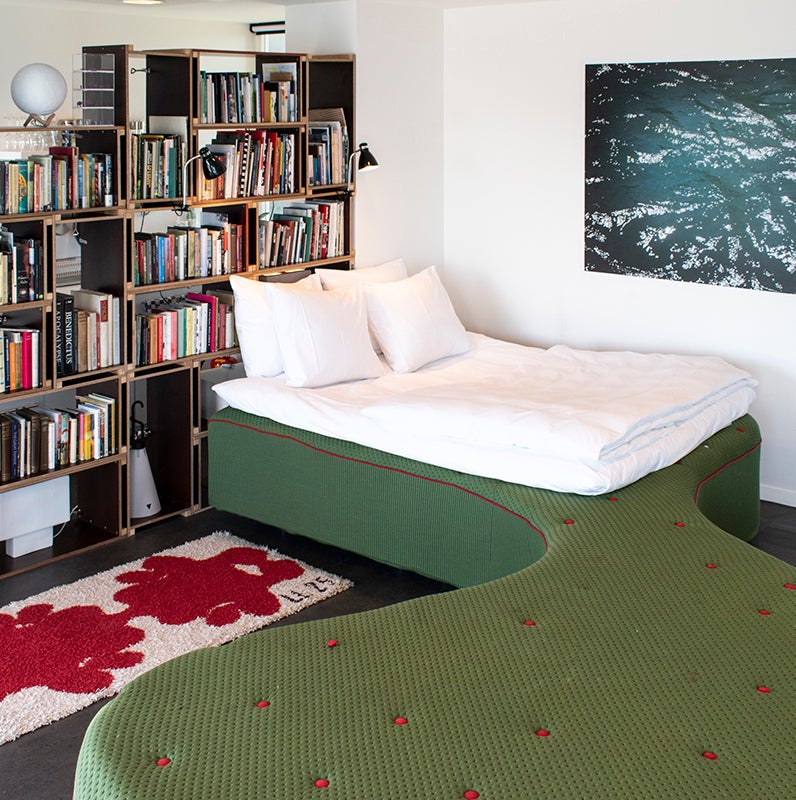 You’ve strolled along the canals, dunked a stroopwafel in your morning coffee, and perhaps even donned an orange wig on King’s Day, but you’ve never seen Amsterdam this close.

Say hello to SWEETS hotel, Amsterdam’s new hotel concept that transformed the city’s 28 historic bridge houses (the oldest one dating back to 1673!) into individually designed suites. Now you can stay in a little—truly little—piece of history.

So what is a bridge house, exactly?

Let’s take it back a few hundred years. Until recently, the small structures dotting the city’s canals accommodated the bridge keepers responsible for lifting and lowering the bridges to allow for passing boat traffic. But when a centralized bridge control system was introduced in 2017, the historic miniature buildings—dating back from the 1600s through 2009—were deemed redundant.

Even before the bridges were decommissioned in 2012, a formidable team (composed of architecture partner Space&Matter, Suzanne Oxenaar, Otto Nan and Gerrit Groen of Seven New Things, and project development partner Grayfield) made a convincing presentation to transform each of the bridge houses into tiny hotel suites: thus, the idea for SWEETS was born. “The concept has always been, from the start, to give new life to the historic and iconic bridge houses but with deep respect to the original architect and building style,” says Lotte Holterman, content creator for the SWEETS team. “During the design process, the inspiration for the interior was drawn from the period the original building was built.”

History could be preserved. Travelers could be introduced to new neighborhoods. Locals could venture across town for a staycation. The city was sold.

Some Amsterdammers needed more convincing, though. “At the time of development, locals were divided in their opinions,” continues Holterman. “Some thought it was a fantastic idea and a good way to keep all bridge houses intact and together, like a family, others thought that, by transforming it into a hotel, the bridge houses were ‘taken away’ from the people of Amsterdam. Now, all these opinions have calmed down and, in general, people are very positive and enthusiastic—we often have local guests discovering their city in a new way.”

I recently discovered the city in a new way, too, during a stay at bridge house 207, Nieuwe Amstelbrug, a two-story charmer originally built in 1912 on the Amstel in De Pijp, a neighborhood I’d somehow missed during my previous travels to Amsterdam. I squealed in delight, cracking open the windows to feel like I was floating on water—you’re that close to the canals—and admiring the bicyclists zooming by, likely unaware anyone is staying inside. You immediately feel immersed in Amsterdam, ready to wander new streets, shop new markets and consider selling all your belongings to live in a tiny house.

Upon check-in time, simply enter a code emailed to you day-of into the touchpad and voila—you’re in. No lobby, no fuss. Nieuwe Amstelbrug had a lush lofted bed, a Wes Anderson–style pink bathroom tucked downstairs, and somehow everything else I needed in between. Breakfast table perfect for two? Check. A tablet loaded with Netflix? Got it. A few additional extra amenities were also included: earplugs, a safe, a refrigerator, a first-aid kit, and even SWEETS-branded playing cards. The checkout process is just as easy. Simply answer a few quick questions on the tablet (“Did you lock the windows?”) and close the door behind you.

Pretty sweet, huh? Stays start at €140 per night, and the guest limit is two adults, ages 21-plus, per bridge house. So go ahead—Amsterdam adventures await.

2019’s Newest Design Hotels Will Give You the Travel Bug

Trust Us—You’ll Want to Flock to These Cool New U.S. Hotels in 2019