Everything you need to know about the future of hospitality. 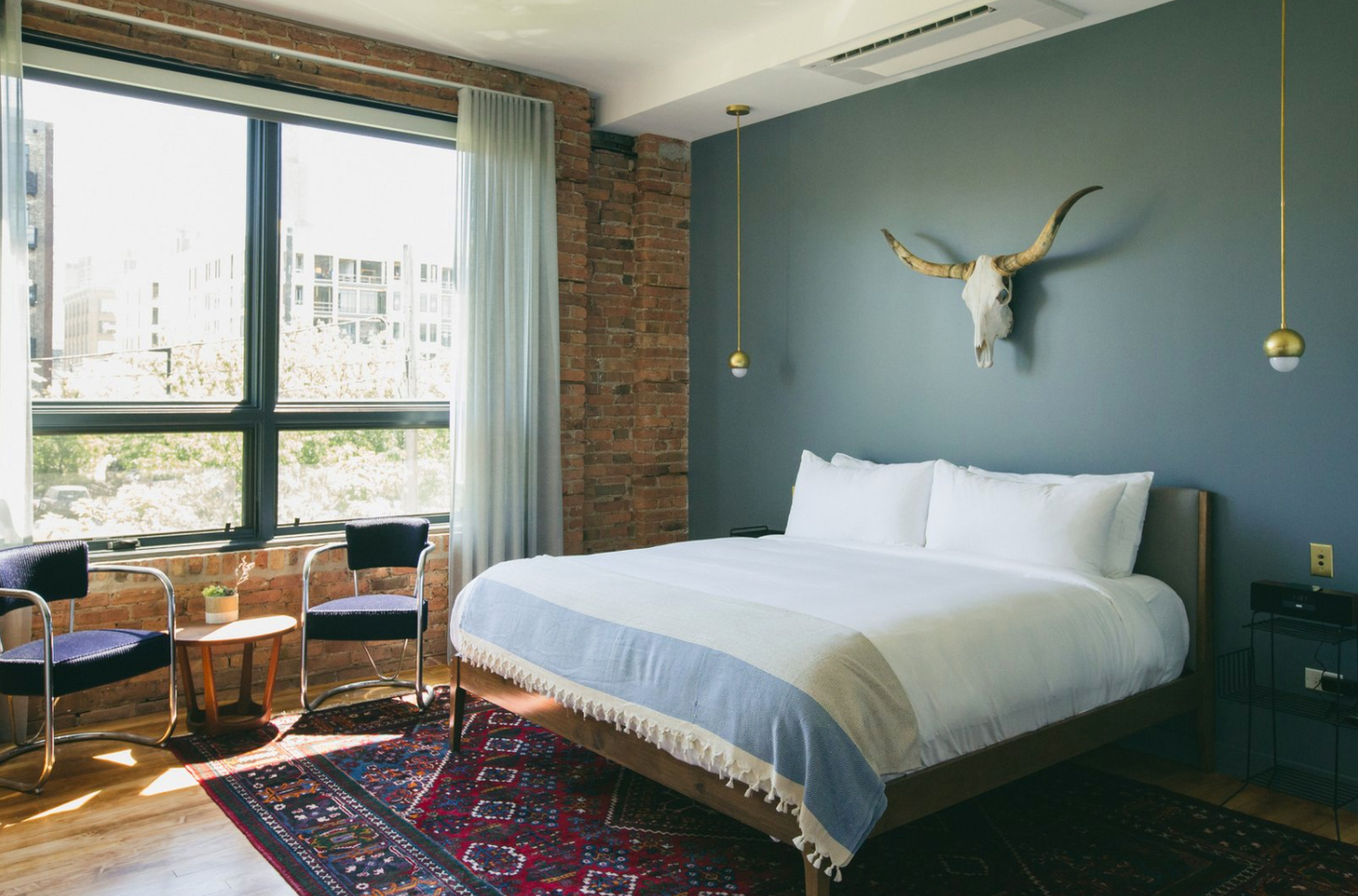 During winter months, snag a sofa seat in front of The Publishing House’s roaring fireplace, and owners Kimberly Lowery and Shawn Uldridge will personally prepare for you a fantastic breakfast of smashed avocado toast, Danish pancakes, or spicy tomato-baked eggs. In fact, the three-item menu changes daily, and represents just one element of the personalized home-away-from-home experience that the Mid-Century-outfitted bed and breakfast has provided for Chicago’s West Loop neighborhood over the past eight months.

And The Publishing House isn’t the only forward-thinking property recently offering—or planning to offer—an alternative hotel-style experience that’s more suited to travelers’ needs today. In the next year or so, a growing number of operators are endeavoring to win back customers lost to online lodging marketplaces like Airbnb by scheming experience-minded, design-forward, affordable accommodations that likewise embrace local communities.

“I think Airbnb made such a quick and disruptive splash in the travel world [when it debuted in 2008] that companies want to try to regain some of that market share,” says Justyna Smith, founder of boutique travel agency Two Nights In. Both Smith and Erina Pindar, managing director of luxury vacation planner SmartFlyer, call out The Freehand—the hip hostel entrepreneur Sydell Group founded in Miami in 2012—as one the country’s pioneers in unconventional, hotel-type lodging.

When Sydell Group launched The Freehand, charging $35 per bed for a shared room and $150 for a private one, his intent was to change America’s negative perception of hostels by “adding design and great food and beverage, not to mention safety and security,” he explains. And in doing so, he proved that a quality overnight stay wasn’t contingent on pricey rooms.

Over in California’s Wine Country, aiming to provide an alternative to the area’s “prohibitively expensive luxury hotels” and “unoriginal chain[s],” Liza Hinman, chef and proprietor of Sonoma’s The Spinsters Sisters, installed 35-room The Astro in January. An update to Santa Rosa’s longstanding The Astro—a motor lodge built in 1963—Hinman, along with partners Andy Hampsten and Eric Anderson, renovated the space to embody a Mid-Century aesthetic, hiring local artisans to craft everything from bedspreads to concrete sinks. The motel’s standard rooms begin at $160, and span approximately 280 square feet.

Budget-friendly and design-savvy lodging were likewise the inspiration for Manhattan’s new Pod, operated by BD Hotels, which owns four other micro-hotel concepts in New York and Washington, DC. The newest, Pod Times Square, premiered this past January, and serves as the company’s flagship, dressed in a contemporary, clean look by interior designer Vanessa Guilford. Rooms start at $75 for a space of about 120 square feet, equipped with amenities like in-room media centers and free WiFi. The property has also teamed up with one of the city’s most esteemed restaurant instigators, Major Food Group, on a forthcoming tiki bar and outlet of popular Italian chainlet, Parm.

“Most people would rather save some money to go on another trip than splurge on one night’s stay,” states Chris Sewell, one half of the Shelter Social Club team. Keeping this in mind, in 2012, he and business partner Kenny Osehan acquired Ojai, California’s Ojai Rancho Inn, and renovated the place with a photogenic, bohemian feel. Rooms go for as low as $149.

“Consumers these days want to have an experience, and an Instagram moment,” he adds, explaining the importance for smart design. Shelter Social Club currently runs two California properties, with plans to overtake three more in Joshua Tree, Ojai, and Palm Springs this year.

Perhaps inspired by The Freehand, Hawaii-based Aqua-Aston Hospitality is in the process of reviving the concept of the hip hostel. The group is presently renovating Ewa Hotel in Waikiki with a 1970s-inspired look that will incorporate a skateboard motif within the design. According to property reps, single bedroom rooms will offer an upscale “bunk bed chic” style, and the space will house a communal beer garden and lanai patio when it opens in 2019.

“We have seen consumer behavior change, and the industry is doing its best to adapt,” explains Alpert of the shift toward alternative properties. “We are seeing hotels that are designed to feel a bit more like home, and brands are focusing on experiential programming, versus the old school ‘heads in beds’ mentality.”

London’s self-proclaimed “anti-hotel” The Hoxton—which debuted in 2006, and prides itself on presenting a fairly-priced, community-oriented establishment with a cool vibe—presently counts four outlets in Europe. Operator Sharan Pasricha recently revealed plans to unleash five US locations, three of which are slated to open this year in Portland, New York, and Los Angeles. A major part of The Hoxton’s brand includes building communal spaces and inviting in local artisans to collaborate on workshops and more.

But in the world of alternative hotel properties, what’s next? Alpert believes that wellness is a trend we’ll see going forward—and he himself is working on a soon-to-be-announced Southern California property embracing just that.

See more trends you need to know about:

7 Tiles That Will Dominate the Trends This Year Trend We’re Loving: Mirrors in Stone Còsagach Is the New Hygge