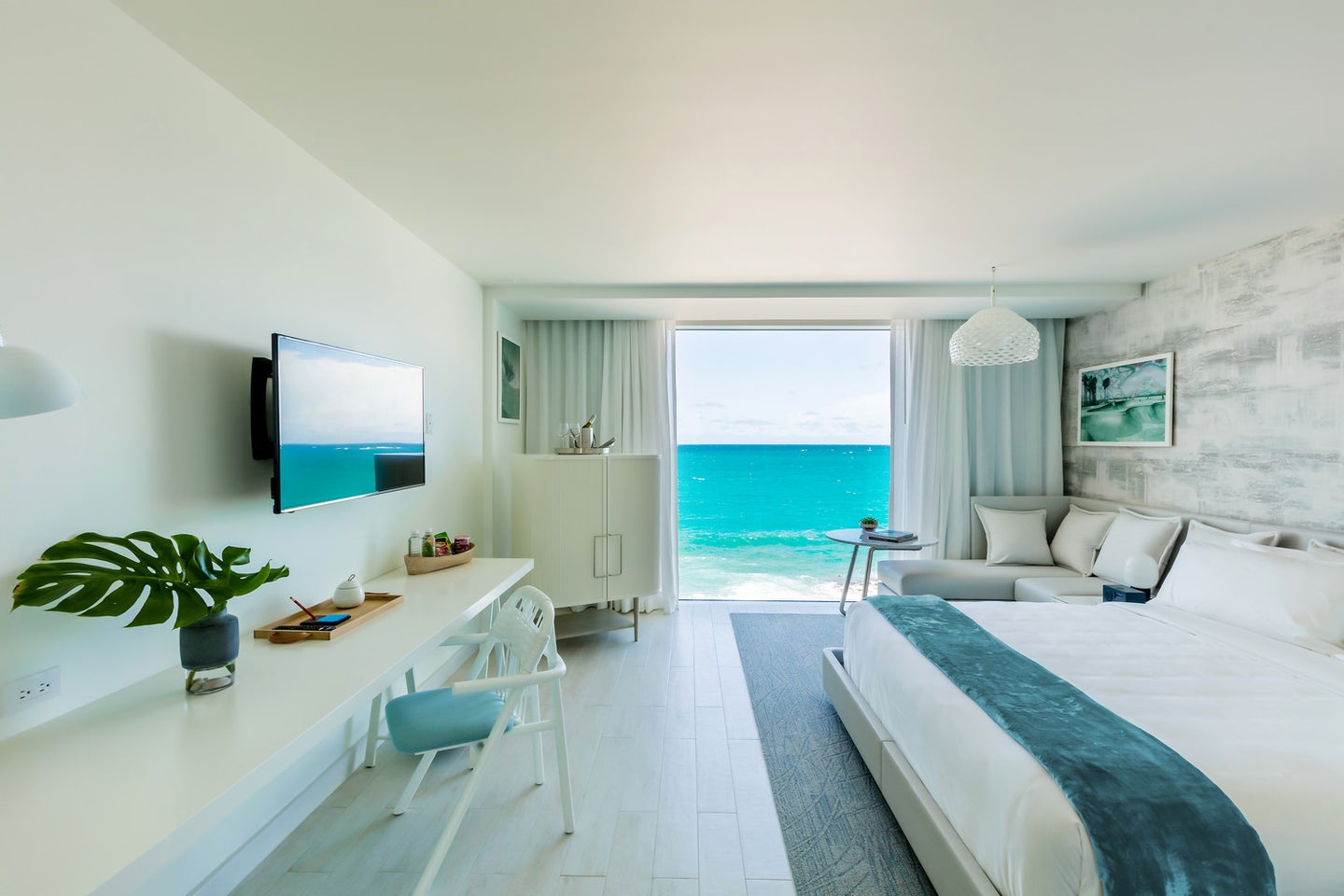 Puerto Rico’s Condado Beach, located just a few miles east of Old San Juan, is often compared to South Beach, Miami. It’s one of the city’s most popular hotspots, with both locals and tourists flocking to the vibrant neighborhood, where the parties go on until dawn and the salty sea breeze fills the air.

“We know how to party here,” my taxi driver tells me as we drive to the Serafina Beach Hotel, a new boutique property that opened its doors in March after much delay, thanks to the devastation wrought by Hurricane Maria last September. One hundred percent of the island lost power and an estimated 1,052 lives were lost.

I had asked about life after Maria, and it was inspiring to learn that despite ongoing hardships, locals are eager and happy to return to their way of life. From drivers to tour guides and bartenders, every person I spoke to maintained that they wouldn’t want to live anywhere else—this is their home, they have no plans to leave, and they want the rest of the world to see their island on the upswing.

So, even though some may feel uncomfortable about vacationing on an island where recovery efforts are far from over and thousands are still without power, Puerto Rico’s tourism industry makes up for more than 10 percent of its GDP, and visiting right now is needed more than ever. This is why the opening of a new hotel is so important: The 96-room boutique property is the first hotel to open in San Juan after the hurricane—a sign that the island is ready to welcome visitors again.

The Serafina Beach Hotel is the brainchild of Vittorio Assaf and Fabio Granato of Serafina Restaurant Group, and their first ever hotel concept. Assaf understands the urgency in bringing tourists back to Puerto Rico: “The islands deal with severe weather all the time, and perseverance is the key to success. Tourism is a major part of the Caribbean economy.”

“At Serafina, we were targeting a contemporary, fun-seeking customer that appreciates a modern take on design,” explains Jesse MacDougall, creative director of strategy and brand development at ICrave. “There are so many hotels in Puerto Rico (and the Caribbean) that have this colonial era patina, and we wanted to break from that to embrace a clean line—simple, sleek, and chic.”

Water is also a huge part of the design, as this hotel is the only one on Condado that allows you to see the ocean from everywhere—even the valet. Rich teals, fresh blues, and sea greens are the name of the game, from the textured natural lighting the second you enter the lobby to the clean lines and furniture accents in the rooms. “The goal was to keep it simple and draw the ocean in, as you’re rarely disconnected from the water,” says MacDougall.

The lobby is a clean and inviting space, with Scandi-inspired furniture and woven pendant lights abound, dotted with tropical plants. The design, although definitely a play on modern, pays homage to its location—a prime example is the mural by young Puerto Rican artist Sofia Maldonado, who was discovered thanks to her eclectic street art found throughout San Juan.

Similarly, the attached lobby bar, PiñaCo, uses a terrazzo-style countertop and jeweled base to give a sense of luxury to the space. A hanging swing shaped in the same way as the entrance pendant lights add cohesiveness and a surf-lodge environment (“Instagram bait,” as MacDougall puts it), made even more apparent with some more local artwork: custom surfboards by local artist Charlie Ramirez, a watercolor area rug by Durkan, and a sea-inspired mural painted on the ceiling.

“Large format art and a fun-loving spirit are really the cornerstones of the brand,” says MacDougall, who shed Serafina’s usual blue and yellow color scheme for more muted and elegant tones in the restaurant. Called aMare, which means “to love” in Italian as well as “to the sea” in a regional Italian dialect, the seafood-centric dining spot seats over 100 guests and opens to both the street and ocean sides of the building. White furniture, custom blue lamps, turquoise and grey tiles by Nemo, and a white beaded curtain add some bungalow charm, and a multitude of mirrors extend the space.

Guests have three options with regard to rooms: ocean and pool view, bay view without a balcony, or a pool view with. But even those without access to the outdoors in their bedrooms will feel connected to their views: “A small but significant detail in the rooms is the recessed sill on the floor-to-ceiling windows,” explains MacDougall. “There is no visual break with the view, and the ocean has an almost psychedelic effect in the white and grey room.”

Every element in the space was used to add expansiveness to the area and allow the guest a feeling of being at one with the ocean, from the sea green rug and duvet to the moss-colored blankets at the foot of the beds. In the bathroom, there’s a shower only half covered by a glass door, while a wall-mounted ladder shelf mimics pool stairs. Minimalist wallpaper by Romo gives the room texture without letting your eyes turn away from your view.

“The hanging lights in the guestroom give the room a human, residential scale, while the lobby pendants do the opposite and add drama to the soaring space,” explains MacDougall. “We had the luxury of a large room format (325 square feet), so we used the upholstered headboard and settee to make the bed feel like a big soft playpen.”

Guests can use that attached seating area to read, work, or relax, all while still feeling like they’re close to the action.

The tropical 85-degree plus weather all year round in San Juan means true indoor-outdoor living, and these spaces were just as carefully thought out. The outdoor seating area at aMare faces the stunning 50-foot long infinity pool, with planters creating the illusion of faux windows (real glass windows were decided against after the ocean waves hit the building in high tide). Bleached sofas, teal accents, and rattan patterned metal coffee tables create a contemporary bohemian vibe.

There’s an air of relaxation permeating the property, which is exactly what tourists want, as most of them fly in from busy cities like Los Angeles and New York. “Puerto Rico can best be described as peaceful and magical with great energy,” says Assaf, while observing locals and tourists alike relaxing on the deck.

“John Paulson of The Paulson Group [the investment firm that funded the hotel] gave Fabio and I an opportunity that we could not turn down,” explains Assaf. “We had been visiting San Juan for years given its close proximity to New York, and were already in love with the destination. When John offered us the opportunity to design and brand the hotel, we knew we had to take advantage.”

While tourism is definitely returning, this doesn’t mean the island’s completely normal, though, and visitors should come in expecting that. In Old San Juan, stores that initially had walls are now open air, some old-school dive bars look a lot more run-down with peeling paint and wallpaper, and some buildings are still missing windows. Near the pier, parts of the sidewalk are still cracked and broken—and outside San Juan, locals still have no power.

But on the shores of Condado, where the Serafina and other hotels employ hundreds of locals, it’s clear the island is recuperating—and fast—trying to make the most of the tourist season. “Living on an island, we expect things like power outages, even though this one was far worse than others,” says Laura, a receptionist at the hotel. “We’ve grown used to the relaxed island vibe, where if the power is out one day, we just go to the beach.”

While Serafina’s in-house generator guarantees power outages won’t happen to hotel guests, one thing is clear: Puerto Rico is bouncing back, and visitors should, too.