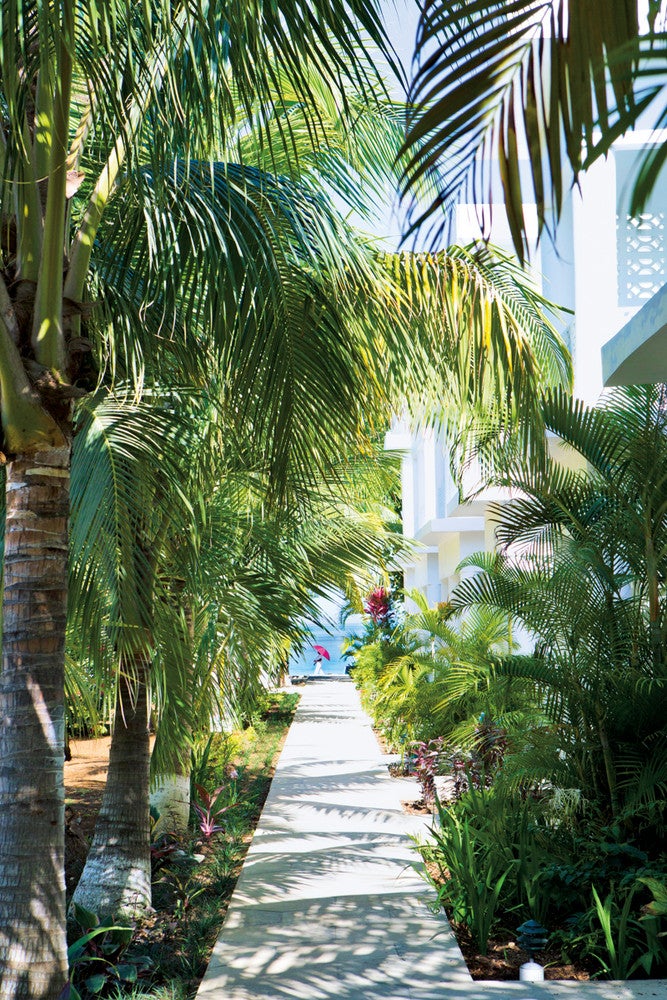 Summer’s never-ending sunset reel, the punchy exteriors of local buildings, and vivid native vegetation are just a few of the inspirations behind Jamaica’s newest hot spot. The Skylark Negril Beach Resort, which officially opened its doors in June, is a second act of sorts for the team behind the beloved Rockhouse Hotel, located just down the road in the popular West End. Instead of dramatic cliff-top vistas, however, the sister property is discreetly tucked away among palm trees, hibiscus ﬂowers, and ti leaves.

As a whole, the palette ties back to life in Jamaica: rosy pastels inspired by the soft skies overhead, bold reds taken from the ackee—the country’s national fruit (also printed on the graphic bedroom pillows)—and several shades of sea blue, plus screen-print-style art that pays homage to the island.

by Olympic Paints at Lowes

Beyond drawing on the natural elements, vibrant decor statements are aplenty. Bubblegum pink color-blocked walls and striped ceilings channel Memphis design in the guest rooms, while mid-century moments carry through in the common areas, featuring wood paneling and blush accents. Look closely and you’ll even ﬁnd a nod to Art Deco in the patio chairs.

At the on-site restaurant, Miss Lily’s (a satellite to New York City’s go-to Caribbean eatery), checkered ﬂoors and vintage record cover–lined walls add a lively dancehall note—complete with an outdoor jerk smokehouse and grill that serves up traditional fare and a reggae playlist from early morning to late at night. Then all that’s left is to jump into the water and soak up your striking surroundings.

This story originally appeared in the Summer 2018 issue with the headline “Caribbean Cool.”