The old one became a bonus bar. 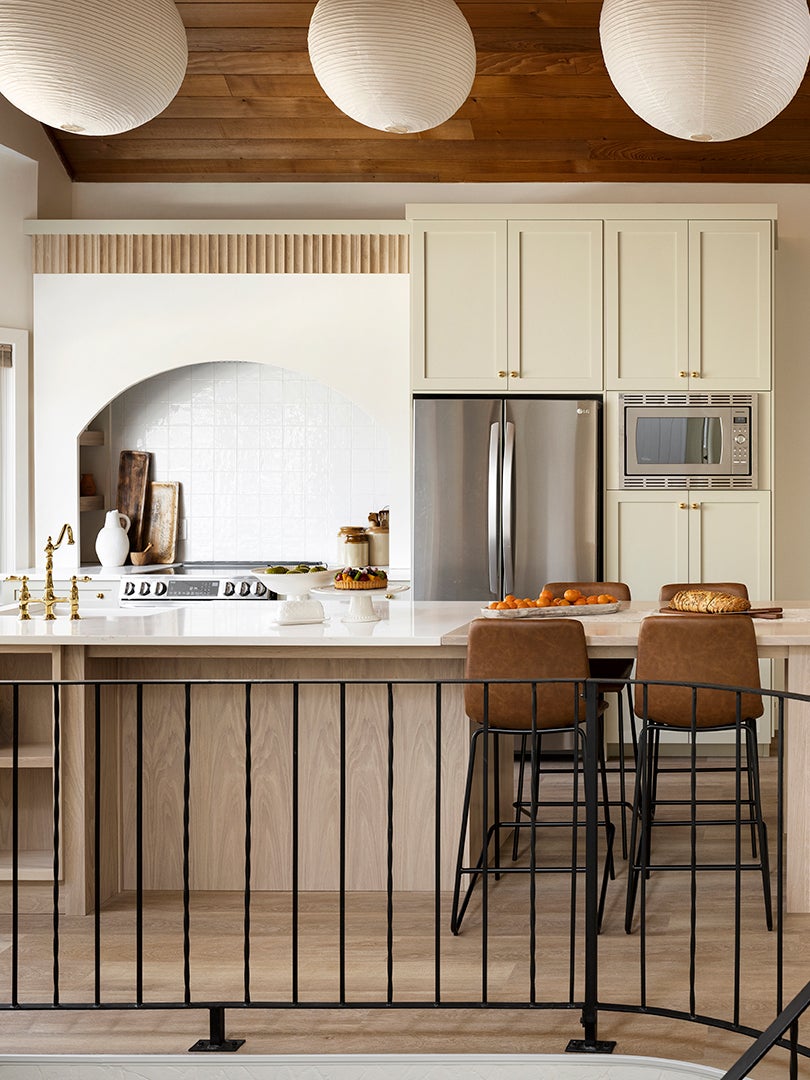 The second you walk through the door of this Alberta, Canada, house, you’re faced with a choice: Go up or go down. At the time McKenzie Milhousen and her mom purchased the 1,300-square-foot home with backing from a local investor (the idea was to renovate and resell the property), descending a few steps would take you into the kitchen. Walk up the spiral staircase and you’d end up in the living room. “When we got up there and saw the vaulted ceilings, we immediately knew it made sense to move the kitchen there,” recalls Milhousen, a former trader–turned–design enthusiast who recently launched her own real-estate development company, By George Collective.

The idea to relocate the kitchen all stemmed around maximizing the views of Alberta’s warmest lake and a nearby bird sanctuary. “We knew there was a good chance that the buyer would be using this as a second home or a summer house, so it would get a lot of entertaining use,” says Milhousen. Her approach to remodeling is less about flipping and more about reimagining. With help from her mom, the Canada native walks a fine line between spending too much and doing anything on the cheap. “I lean toward something that’s really well-thought-out but can also turn a profit at the end of the day,” she explains. Ahead, Milhousen reveals how they made the quirky layout more functional while also boosting the home’s value.

Pull Up a Seat at the Bar

Opening up the floorboards to run plumbing to the second level took up the biggest chunk of the timeline, but luckily Milhousen was already planning on replacing the carpeting with wood anyway. In the meantime, she worked up a strategy for how to best map out the narrow cooking zone without losing the working fireplace in the corner, which got a coating of stucco and a few layers of limewash. “At all of our own family events, everyone ends up around the kitchen island,” says Milhousen of her decision to prioritize that structure. At the end of the elongated worktop is a spot for four stools. And to really drive home that lake vista, she added a counter-height bar in front of the nearby window. “Everything is the same height so that the chairs can be interchangeable,” she points out.

Milhousen’s original thought was to cover the ceiling in different size globe lanterns for a whimsical look and paint the cedarwood paneling white. But after giving it some thought, she held off on the paint and the elaborate lighting plan in lieu of a more pared-back arrangement consisting of three pendant lamps. “We didn’t want to draw too much attention away from how beautiful the cabinets are,” she shares. Some of the cupboards got a coat of sage green paint, while the others were left in their natural white oak finish.

Hide the Fact That Everything’s at Your Fingertips

The shelving niches on either side of the cooktop were Milhousen’s mom’s idea. “She’s about 5 feet tall, so she can’t reach the other tall cabinets that go up the wall,” she explains. Of course, her logic was that a potential buyer might be of a similar stature and need to access seasonings on the fly.

Put Your Elevator Pitch Into the Details

By taking away one of the closets in the guest bedroom, Milhousen gained enough space for a walk-in shower—now adorned in earthy green tile—and a freestanding tub in the main bathroom. In the powder room, she mimicked the home’s Tudor-inspired curves with an arched mirror surrounded in fluted oak trim.

“We tried to make sure every room had a statement piece,” she says. Going the extra mile with the millwork and tiling the risers of the stairs are the kinds of details that sell a place at the end of the day. “It’s what people comment on and love,” adds Milhousen.

Double Your Entertaining (and Cleaning) Opportunities

On the lower level, Milhousen sectioned off part of the open space with barn doors to create a flex room that can be used as a third bedroom (adding value!), an office, or a gym if desired. And she didn’t nix the old kitchen zone altogether. Instead she got rid of the unnecessary appliances (the dining table is now where a fridge used to be), refreshed the cabinetry, and turned it into a bar–slash–wine cellar.

Having a bonus dishwasher is especially handy for people looking to use the property as a vacation home. “You can have family members and all of your friends over for a Canada Day party, and they’ll fit and feel comfortable,” says Milhousen. This isn’t your average lake house.