After Their House Burned Down, This Couple Moved Into a 150-Square-Foot Airstream

Step inside their vintage-filled home on wheels. 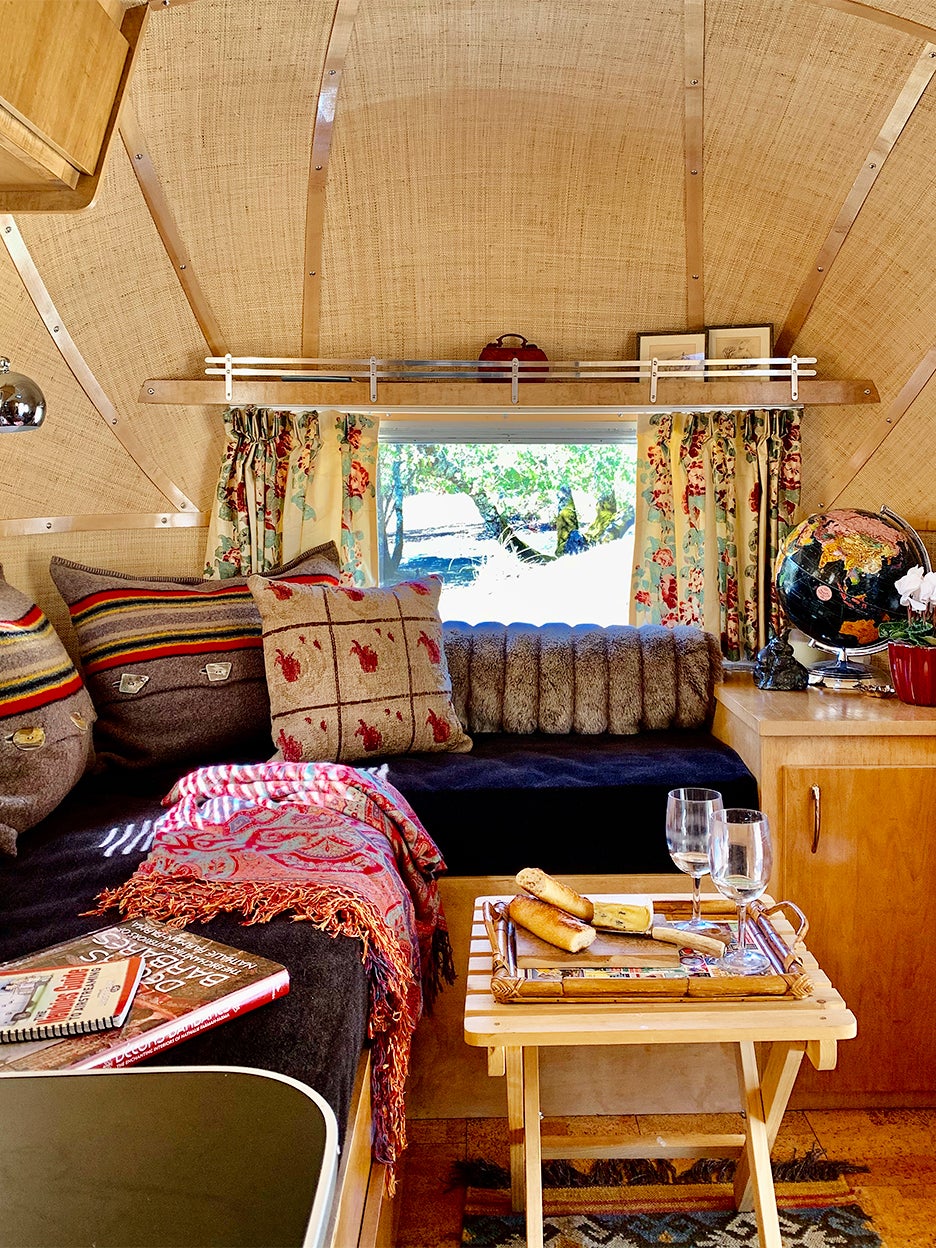 Three years ago, Rela Gleason, who’s traveled the world from India to Mexico, had a realization: “You know, I’ve seen so many places, but I’ve never really been around the United States.” And so the Israeli-born interior designer—who lived in Europe and the Middle East before finally settling on a bucolic 40-acre vineyard in California’s Napa Valley with her husband, Don—embarked on a two-year journey of renovating a vintage Airstream named Rosie.

The plan: tour the country’s national parks. Fast-forward two years (after an 18-month-long retrofitting delay), and Rosie finally pulled up on their property in Calistoga in late September. Just a week later, the couple found themselves hooking Rosie to their car in a hurry and fleeing with a few of their most prized possessions, because the California Glass Fire was advancing quickly.

Thankfully, they made it out in time. Casa Kulanu (meaning “all of us” in Hebrew), the picturesque stucco, wood, and stone country home that Gleason had lovingly built over the last 20 years—with its meandering drives, light-filled breezeways, roaring fireplaces, and shaded outdoor showers—burned to the ground (save for part of the main house, which was so damaged by water and soot, it’s become unlivable). “When you actually step on the property these days, it’s like getting kicked in the stomach. The air comes out of you. The countryside around it is just black sticks,” says Gleason.

So for the past six weeks, the couple has been living out of the 150-square-foot Airstream, traveling up and down the coast. Gleason, who meticulously retrofitted it exclusively in vintage finishes, cut no corners in the renovation. She added a full-size shower and a compact washer-dryer,and searched high and low for the perfect retro stove and black porcelain toilet.

advertisement
“I stocked it the exact same way I stocked my house. Everything is small. But it works.”

Gleason was inspired by Adirondack camps and old sailboats for the interior. “I wanted it to be ’30s Deco-inspired,” she says. She designed cabinetry with round corners—which turned out to be practical for maneuvering in tight quarters. “Visually, it creates a tremendous sense of space in that little interior,” she explains. She banded the Formica countertops with aluminum strips as it would have been in a 1950s-era kitchen.

On the walls and ceiling, Gleason applied a Madagascar cloth lined with wood ribs inspired by a boat trip in the South of India. “I used it everywhere but the kitchen, because I wanted to be able to keep it clean,” she says. The rest of the cook space came together with more vintage hardware and an apartment-size gas range she found on eBay for $100 and had re-enameled. “I can stand in one place and reach everything I need: a grater, a mini Cuisinart, a mini mixer,” adds Gleason. “I stocked it the exact same way I stocked my house. Everything is small. But it works.”

Underfoot, Gleason used cork tiles to keep the walls’ honey-colored scheme: “Visually it just expands,” she says. But in the bathroom she wanted something a little different. She scoured the Internet for red linoleum until she came across a warehouse selling discontinued ladybug red tiles. “I asked for a sample and they sent me two,” Gleason recalls. “They were this perfect tomato hue, and so I told them: I’m ready to order.” She only needed six more tiles, but the minimum order was 250, so she asked her friends and family to order samples until she could fill the entire floor of the tiny bathroom.

Much of what is in the Airstream was sourced online over a two-year period. “I let my fingers do the walking,” says Gleason of her Internet finds: British bathroom faucets, Russel Wright melamine, and Bakelite drawer pulls. “It was a scavenger hunt and great fun.”

At the back of the trailer, Gleason imagined a corner sectional that converts into a full queen. “A lot of Airstreams have beds that stay open all the time, but I wanted it to double as a seating area for when we want to sit and watch television or make a puzzle on a rainy day,” she says. Here, Pendleton camp blankets double as pillow covers, and chrome globe sconces are hardwired into the 1-inch gap between the exterior and interior shell. Gleason’s favorite fabric, a Rose Tarlow chintz she never found the right spot for, hangs on the back window.

“Rosie, as it turns out, was a really good name, because she’s made our life rosy in a very gray time.”

The rest of the space is filled with sentimental items: tiny bronze sculptures used as doorstops; a silver seashell tray to hold soap bars in the bathroom; a red paisley shawl bought in India; and—perhaps the most precious—a map of the United States’s flowers embroidered by Gleason’s mother, which she has owned since age 12.

Outside, Gleason hung new awnings on every window, which gives the couple privacy without them needing to pull all the blinds down. “Being able to extend it to the outdoors when the weather is good is like having a whole other room,” she says.

She isn’t going to rebuild the house that took her decades to perfect—she chronicles her time there in her new book, Living Well, a cookbook and memoir of her years on the vineyard.  “I don’t want to spend the next 10 years of my life waiting for things to grow back and trying to re-create the past that burned,” she says. Since the fires, they’ve slept in Half Moon Bay on the oceanfront, hiked up to waterfalls in McCloud, and witnessed the Roosevelt elk migration on the Pacific Coast before ending up in Redwood National Park.

“Being able to extend it to the outdoors when the weather is good is like having a whole other room.”

Once the property is cleaned up and on the market—which could take months—the Gleasons are taking off in Rosie across the U.S. in search of their next adventure: They’ll travel through the Southwest to Florida and go back up through Atlanta and Charleston, South Carolina. “Rosie, as it turns out, was a really good name, because she’s made our life rosy in a very gray time,” says Gleason. “If we can live happily in 150 square feet, we can live anywhere.”