What it was like to start the Rent the Runway of parties. 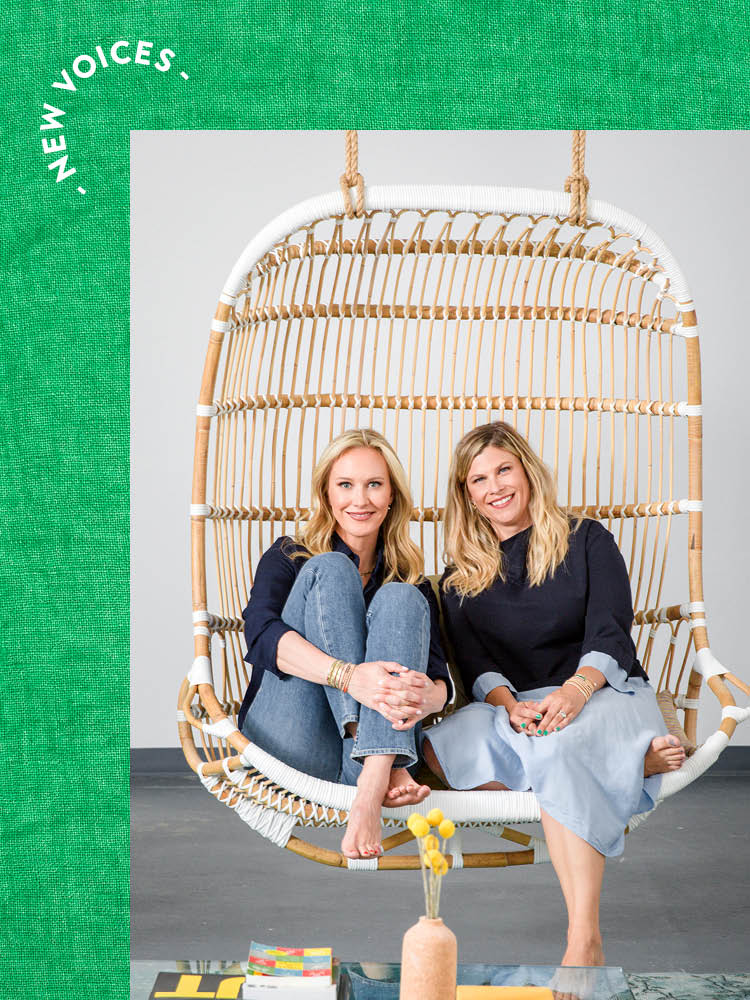 What does it take to shake up an industry? In New Voices, we spotlight and celebrate the female founders who are changing the way we live, shop, and style our homes, one bright idea at a time. In their own words, they share the major milestones and less-than-shiny moments—from prototypes gone awry to seeing their first product “in the wild”—that make it all worthwhile.

Amy Griffin and Jessica Latham spent almost 10 years “pulling off” parties together, writing menus with a sense of humor (“It’s not gluten-free, but it’s delicious,” one note read), and assembling lavish tablescapes far beyond the basic white arrangement. For a while, they had been brainstorming about how they could simplify the planning process—not just for themselves but for others, too. It wasn’t until one day about a year and a half ago that the childhood friends sat down after a hike and realized what they had to do. They needed to make entertaining easier—and their new company, Social Studies, sets about doing just that.

Granted, easy may not be the word that immediately springs to mind when you see a table outfitted with La DoubleJ plates or a paint-it-yourself table runner. The sheer mass of designed-to-a-T bridal showers and birthday parties and Friendsgivings on Instagram and Pinterest can, to anyone with a small apartment and a smaller dinnerware collection, seem purely aspirational. How could you throw such an event yourself without shelling out on a slew of new tableware—not to mention favors and centerpieces?

Griffin and Latham’s solution lay within a single, shippable box: a coordinating set of plates, glasses, flatware, and florals. The container needed to be sturdy to keep those pricey goods safe—so they tapped none other than the team that made the original Away suitcase. “Jess will tell you,” Griffin says, laughing. “She’s rolled them down flights of stairs.”

Their aim: Equip the ordinary party thrower—someone having a small- to medium-size group of people over for some kind of occasion—with the tools to make a meal in their home feel special. The business model is akin to Rent the Runway—but for parties.

Customers simply input the number of guests they’re expecting, then select their desired tableware design (right now, there are 18 to choose from, including a few holiday-specific options) and any add-ons (anything from a Sonos speaker to a Bob Ross costume). If they’re feeling fancy, they can also get mini menus and nameplates made. In less than a week, they’ll receive the box with everything inside—including fresh flowers and perishable table accents like lemons, which the host can keep. All the rest gets packed up after the party’s over and sent back. Easy as that!

As the service expands beyond New York City and the Hamptons, Latham and Griffin hope to convince more and more people to invite company over. “I often think back to my early 20s in New York, when I was living in a studio apartment where you could practically lie in bed and pour yourself a glass of water at the same time,” Latham says. “I think I hosted 50 people one time in that apartment, and you know what? We just sat on the bed and the couch and I made it look really pretty with all the stuff that I had. It doesn’t have to be formal. If we can take the stress and anxiety out of the planning for people and deliver confidence to their doorstep so that they can say yes to hosting, we’re winning.”

Here, Griffin and Latham share the moments—good and bad—that led them to create countless nights to remember for friends, family, and strangers.

We Got Creative From the Very Beginning

Griffin: At one of our dinner parties five or six years ago, I came to Jess and said, “These salt and pepper holders are so gorgeous. Where did you find them; is it a rental company?” She looked at me and said, “You could buy them for something like $200 a piece or rent them for some crazy numbers, so I just went out and bought some clay and I made them last night. I hope they’re dry!”

Latham: You would never be able to obtain those from a traditional rental company. A lot of items in our kits are like that and really provide a unique, creative perspective, as opposed to the typical kind of white plates and glassware that you can get from most of the rental concerns.

We Realized That We Kept Coming Back to One Thing

Griffin: Before Jess and I sat down 18 months ago and had the conversation that kicked off this idea, I had taken a trip around the world with my kids and my husband. I’d collected tabletop pieces from every country, everything from handmade place mats to glasses that were blown in Japan, and I said to Jess that day, “This makes sense.” Everywhere I traveled, everything was about being at the table and about community, about bringing people together. I said, “I think we need to make this happen.” It’s been all-systems-go since.

We Flew Across the Globe to Meet a Deadline

Latham: There was a window there where we needed to actually see one of the prototypes of the boxes, but we didn’t have time to ship it from China. So we flew there to look at the last version and make final revisions. We’re still continuing to refine it; we’re working on a version two of the kit that’s going to be even easier for the customer in terms of packing and unpacking. It’s going to be a bit smaller and even more lightweight. It’s a constant journey for us.

We Learned to Love Behind-the-Scenes Work

Latham: The first time I walked into the warehouse was about three weeks before we were launching, and it was still a construction zone. The thought that went through my head was: Oh, my God. But we got it done, and fast-forward to three weeks later, everything was organized and inventoried. At any given time, we know where every glass and every fork is and can track them. That level of technological sophistication that goes into building the back end has been a super-fun learning process for me—I never thought I would have so much fun discussing bar coding and commercial dishwashers.

We Received Every Family Member’s Stamp of Approval

Griffin: My 10-year-old daughter is very precocious and has sent me texts all throughout the summer, saying, “This is the set I want to use for my birthday, and this is the look I want for Halloween.” We have a box with four place settings coming for the latter—she and all her friends are going to dress up in onesies and eat pizza.

Here’s your excuse to try that showstopping recipe out on your pals—or, you know, just order takeout.