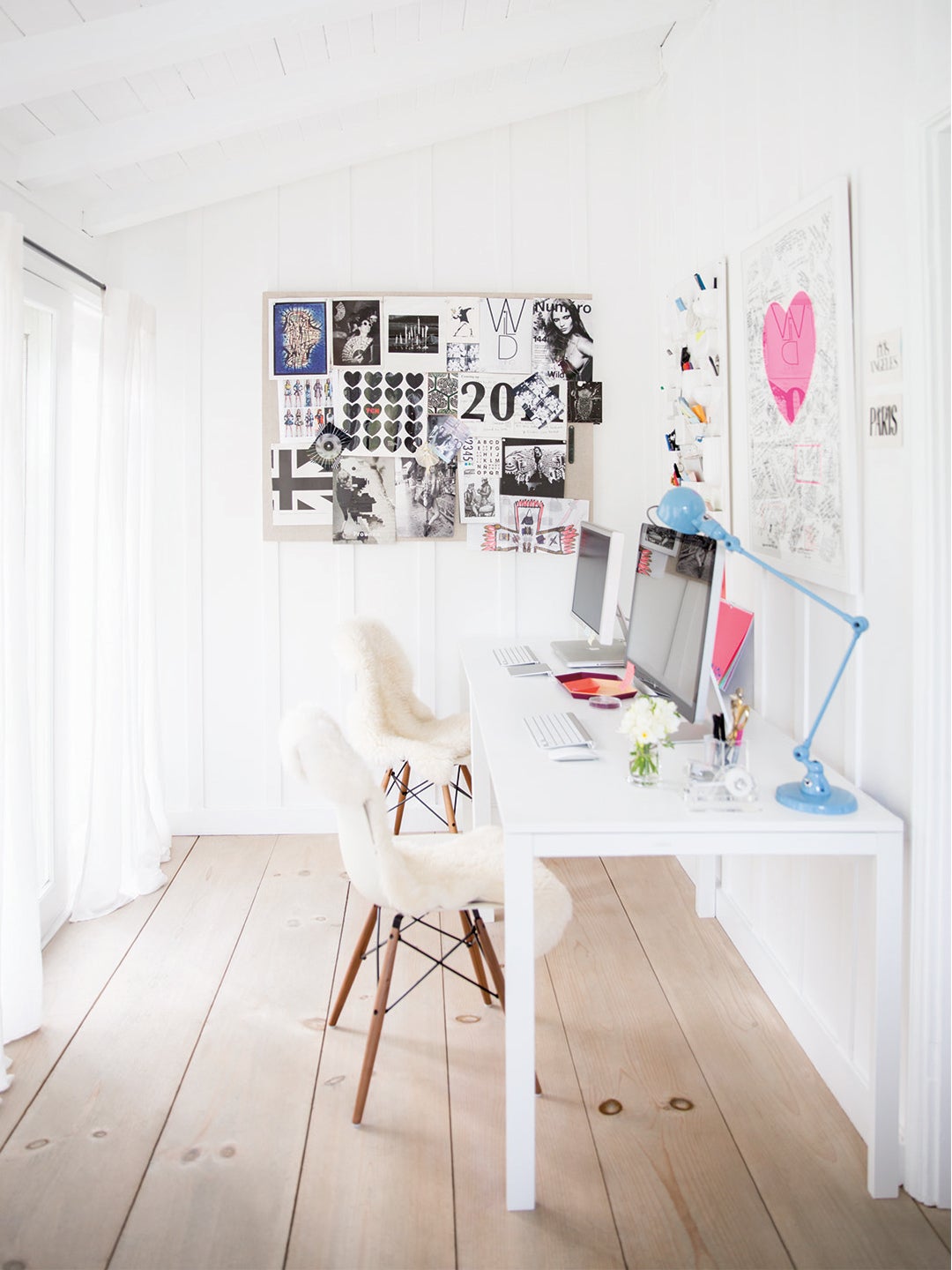 Without the typical office chitter-chatter, puttering through your inbox or pulling together spreadsheets just doesn’t feel the same. Working from home—especially if it’s a big change from your usual flow—has its own set of challenges. Namely, figuring out how to focus when your cat is being cute and the fridge is just steps away and, simply put, you have a whole slew of different distractions to contend with. A good playlist can’t solve everything. But it can help.

Especially when it comes to getting you in the right headspace, the perfect musical selection might be the difference between a day that feels like it’s permanently 3 p.m. and one that sees you checking off everything on your to-do list. Still searching for WFH tunes? Here, seven creatives share theirs.

Musical routine: In my studio we always have music playing. If the sound doesn’t match the tone of what I’m working on, I can’t get anything done. I have a ton of different playlists that I toggle between, and each month I make a new one of songs on heavy rotation. I have a mix of ambient and instrumental music that I listen to if I am reading something dense, a poppier playlist if we need a pick-me-up, one on the themes of yes and no (each song has to feature yes or no prominently in the lyrics), and more. New and new-to-me music keeps me inspired and engaged. Go-to tunes: Recently I have been listening to the new Waxahatchee album, and in the same vein, Lucinda Williams and Bonnie Raitt. I also like to play Jimmy Giuffre in the morning. On repeat: My instrumental/ambient playlist is called Workin. Homework is full of some of my recent top tracks. It starts with a real motivator, and then gets mellower as it continues. It’s a work in progress!

Musical routine: Depending on my mood, my soundtrack can go one of two ways: It’s either a mix of music that has good energy but can gracefully fade into the background, or a playlist of songs where I know every word, ad-lib, and breath of the artist and can have a concert all by myself. When it’s the latter, I’m usually listening to lots of Britney Spears, Christina Aguilera, Kylie Minogue, and No Doubt. Go-to tunes:Shintaro Sakamoto—his music has a beautiful tone that feels both old and new. Since I don’t speak Japanese, I hum along with the melodies. Dorothy Ashby makes gorgeous jazz that isn’t boring. And Britney Spears—what can I say? I am a superfan. I revisit Blackout and In the Zone a lot. On repeat:Werk from Home for a chill option, and Pop Princess Deep Cutz for something a bit more upbeat.

Musical routine: Throughout the day I listen to a variety of tunes, depending on the time, my mood, and the work I’m doing. I usually start with some classical music, and then I switch to the artists or genres I’m working on for research and DJing—everything from Finnish metal and Chinese punk to Arabic free jazz and Latin rock. I usually have music playing—on turntables, on the radio, or on the computer—all day. Sometimes I sleep with it on, too. Go-to tunes: I always go back to Bach, sacred music composers like Arvo Pärt, ragas, free jazz (from Alice and John Coltrane to Sun Ra and Pharoah Sanders), reggae (early sounds from Studio One, Bob Marley, Marcia Griffiths), Afro-funk and Afro-disco (Orlando Julius, William Onyeabor, the Lijadu Sisters), soul (Marvin Gaye, Roy Ayers, Aretha Franklin), neo soul (Sade, Erykah Badu, Jill Scott), and funk from around the globe. At the moment, I’m working on a series focusing on female Arabic musicians in the underground scene, and there’s some really amazing, contemporary stuff I’m compiling. On repeat: Home Lovin features a lot of my favorite chill/dance/dream tracks.

Otegha Uwagba, writer and founder of Women Who

Musical routine: I can’t focus while listening to music with lyrics, so I’ve been listening to lots of movie soundtracks, jazz, and songs in which the lyrics aren’t in English. Go-to tunes: Lots of Alice Coltrane and the Amélie soundtrack. On repeat: I’ve listened to this playlist loads of times.

Musical routine: I usually like to start my day with some sort of world music—I’ve been listening to a great Japanese New Age ambient mix from the ’80s. It helps me zone into my work in the beginning of the day and get into my rhythm, whether I’m making something, packing orders, or invoicing. Later in the afternoon, I move into something a bit more fun and upbeat, like Rihanna, Selena Gomez, Janet Jackson, George Michael, and, on occasion, Bad Bunny. Go-to tunes: Kate Bush, François Hardy, the Beatles, Fiona Apple, the Pixies, and artists on my world music rotation. I also love turning on NTS while working—its playlists will take you on a journey. On repeat: My friend Taylor Livingston always sends me my favoriteplaylists.

Musical routine: My approach to music tends to be really cinematic—even more so now that our reality feels so surreal. I have a 15-plus-hour playlist called Doomsday that I’ve been listening to since the beginning of the stay-at-home order, and I truly get my best work done when I put it on. It’s the opposite of all the comforting, zen playlists people are making. Those are great for downtime, but to power through some work, I need something to put me in a productive and inspired headspace. I joke that the vibe is basically the energy of Grimes and Elon Musk’s unborn baby. Go-to tunes: I’m really loving Polo & Pan right now, and I also always love going back to Polica’s first album, Give You the Ghost. On repeat:This is my full Doomsday playlist, and here’s a pared-down version.

Musical routine: For the past five years or so I’ve made a new playlist every month of all the songs I have on constant rotation—it helps me to analyze where I was emotionally for the previous 30 days or so, and it’s enlightening to revisit them years later. This is what I listen to when I’m doing more administrative tasks, but when I have to write, I can’t listen to anything with words. If I put on only classical music, I have flashbacks to late-night study sessions in high school, so I find my groove with a mix of scores from movies like Call Me by Your Name and Spirited Away, as well as nostalgic video game soundtracks from The Legend of Zelda and Animal Crossing. Go-to tunes: I am always in the mood to listen to Kate Bush, Frank Ocean, Sufjan Stevens, Fleetwood Mac, and the Mountain Goats. But sometimes it’s a 10-hour loop of the Wii Shop background music or an ASMR video of typing that really helps me get a story filed. For at least 10 years now I’ve been a devotee of Rainy Mood. On repeat:Lo-Fi Hip-Hop Radio—Beats to Relax/Study To is a classic YouTube pick for me, but otherwise this playlist features a good mix of my favorites.

See more stories like this: This Is How Team Domino Is Working From Home 5 Work-From-Home Habits That’ll Help Break Up the Day Marie Kondo Swears By This Ritual for Getting Into Work Mode at Home