How One Designer Solved Kitchen Overflow in This D.C. Apartment

Hint: There were coats involved. 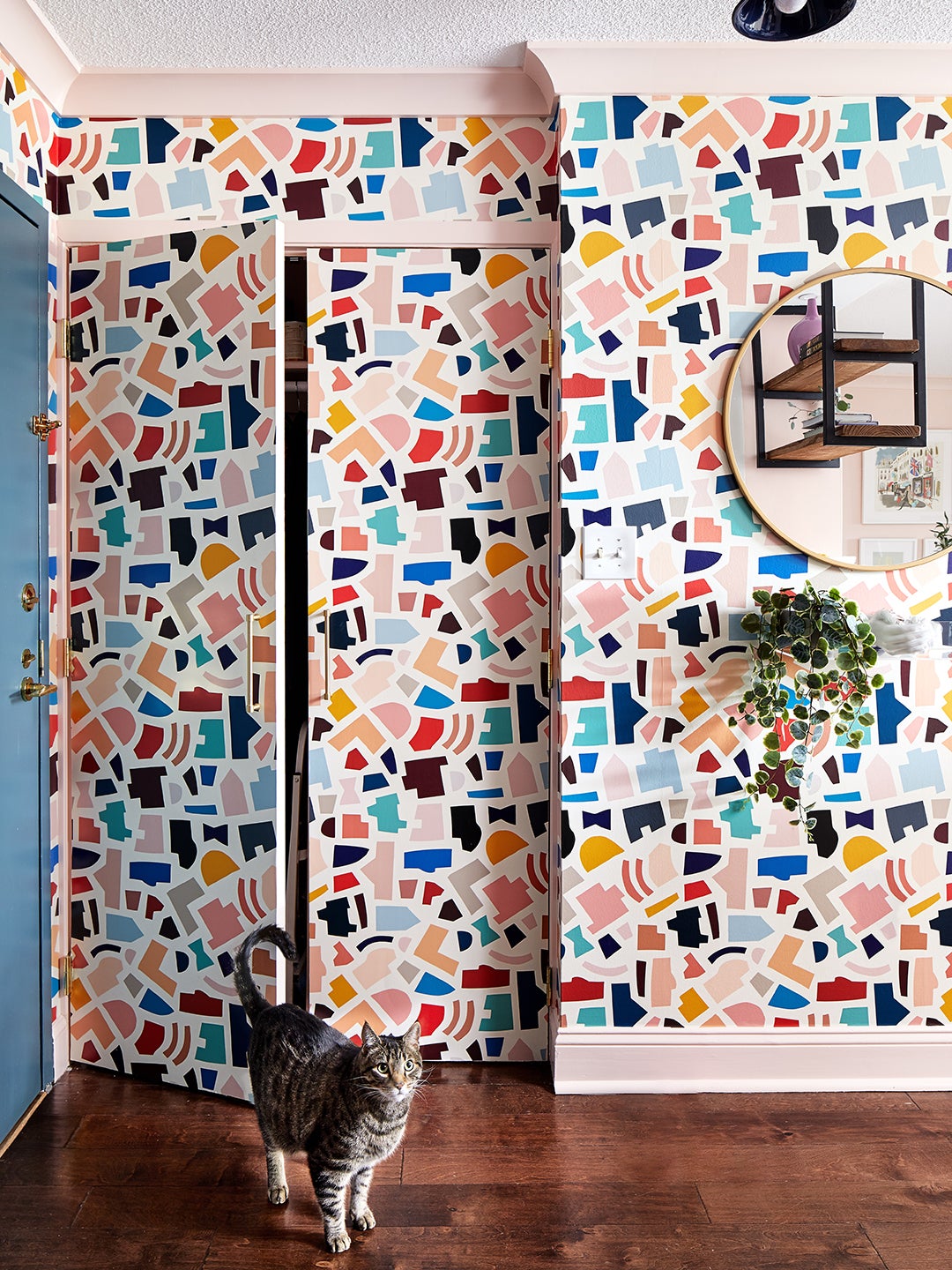 There wasn’t much to impress when Karine Shebaclo first toured the 700-square-foot apartment she now owns in the upper Georgetown neighborhood of Washington, D.C. The popcorn ceilings were low, the kitchen dated from the late ’80s, and the northeast windows made the place feel dark. To add insult to injury, there was zero storage. Still, the young ophthalmology resident immediately knew this was the one.

“I remember stepping out on my balcony and, to my surprise, there was the Washington Monument and Capitol Building,” she recalls. Despite falling in love with the views and the serenity the outdoor area offered (the leafy street was surprisingly quiet for Washington), she had a lot of work cut out for her inside. With the help of interior designer Zoe Feldman, she brightened up every room with bold hues and punchy wallpaper, all the while carving out smart storage in each nook and corner:

The Entry Closet Doubled as a Makeshift Pantry

The front door opened up onto a tiny space by the kitchen that didn’t leave a single square foot for hallway furniture. The only wall was taken up by large black bifold closet doors that overpowered the area, but Shebaclo couldn’t spare the wardrobe space. So Feldman removed the trim, replaced the doors, and covered the entire surface in Kate Zaremba’s City Plan wallpaper (which was based on a local D.C. map). “By papering the doors, we were able to create a landing that feels more formal than your typical one-bedroom,” explains the designer.

The inside of the closet got a makeover of its own, with a custom shelving unit divided into two halves: one for the pantry and microwave, the other for coats and outerwear. “Growing up in a big Lebanese family, love is centered around cooking and entertaining,” says Shebaclo. “I certainly don’t know how to grocery shop for one, and I am always struggling with an overflowing pantry.” Now she has plenty of room, even after a market haul.

In the kitchen, Feldman replaced the old cupboards on one side with full-height cabinets that hide an “appliance garage” and a breakfast bar. “We designed the coffee nook to house my tea and coffee collection,” says Shebaclo. “My Lebanese grandfather was a coffee connoisseur who traveled the world in the 1950s in search of novel tea and coffee blends. As a result, I have an overflowing collection and wanted to house it in a beautiful but practical space.”

To brighten up the windowless room, Feldman picked a blush hue inspired by a trip Shebaclo took to the Quirk Hotel in Richmond, Virginia, and paired it with Carrara marble counters and a light gray ceramic backsplash.

The Pass-Through Was Turned Into a Shelving Nook

The existing kitchen had a quintessential ’80s pass-through window to the living area, but Feldman saw a better use for it. On one side, she blocked it off to create more upper cabinetry. On the other, she used the opening to make a recessed shelving nook that now sits above a built-in dining banquette, which also has hidden storage. “The Bright Eye wallpaper by Kate Zaremba pays homage to Karine’s ophthalmology background,” explains the designer.

She went a step further and added hanging shelving above the narrow peninsula that connects the two areas, creating even more surface space for plants and cookbooks. Now lightened up and filled with clever organization systems, the apartment feels as bright on the inside as it once did on the outside.

See more kitchen renovations we love: This L.A. Couple Sacrificed Their View for a Larger Kitchen—Or Did They? This Couple Traded a Powder Room for a Kitchen That Fits All the Neighbors A Clever Layout Tweak Doubled the Storage in This 36-Square-Foot Kitchen