The $3 Drugstore Buy That Makes My Bathroom Look Way Bigger

Can you guess what it is? 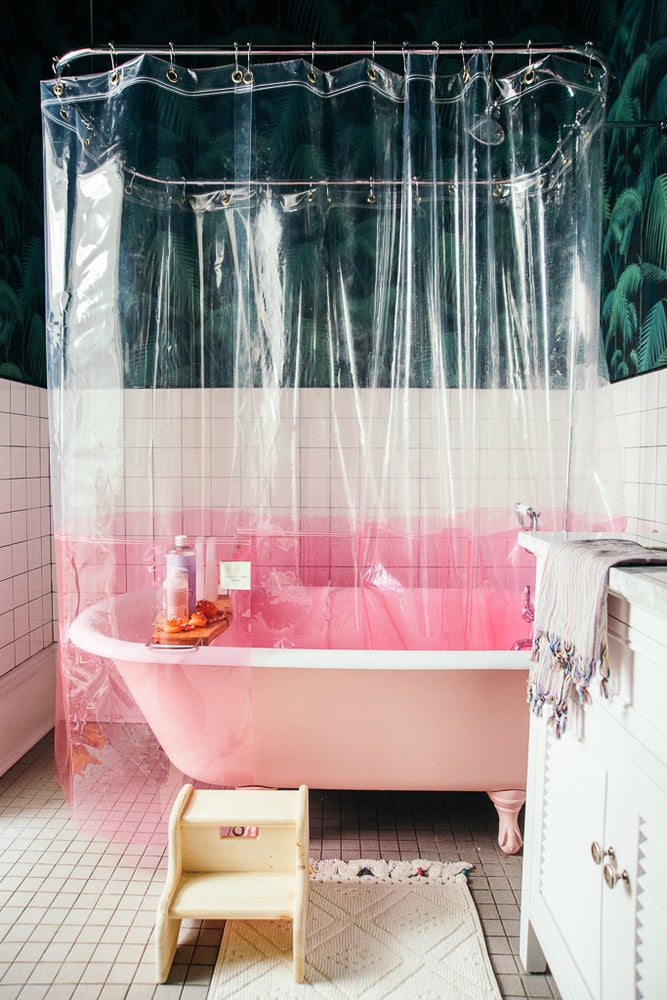 Here’s my qualm with really small bathrooms: We console ourselves with the idea that filling the space with splashes of color—typically by way of a “fun” shower curtain—will be a good enough compromise for the lack of square footage. What they don’t tell you is that the moment you hang that vibrantly patterned curtain, you suddenly lose half the room. We never realize the impact something as seemingly insignificant as a solid sheet can have on the visual depth of a small area.

When I moved into my tiny studio, with an equally tiny, square-shaped bathroom, I knew that I had to get creative. Taking a shower, more or less, felt like I was confined to a box with limited light, thanks to the lack of windows and the two lone bulbs meant to illuminate the space.

My fix came in the form of an affordable drugstore find that can work serious spatial magic: a clear shower liner. I recognize that forgoing the traditional, double-layer shower curtain may be a decorative faux pas, but it had to go. Not only does the curtain allow light to travel more easily throughout the room, but it helps keep the visual flow of the space airy and open. I swap my liner out twice a year, and I still manage to spend less on it than if I bought a solid option. If you’re willing to resist the low price of a basic liner in lieu of a more colorful alternative, a lightly tinted shower curtain can still play to the same effect.

To make up for the lack of pizzazz in my monochrome bathroom, I opted for a handful of low-lift decorative additions that instantly transformed the space. I stuck a few sprigs of eucalyptus into my built-in toothbrush/soap holder and completed the look with colorful soap. Because who doesn’t love a good ombré?

I hung up a serene, wanderlust-inducing print, which invites just the right dose of color into the room without seeming too overwhelming. Bonus points for the accompanying wood frame, which has held up surprisingly well under the often steamy and humid conditions of the bath. A candle atop the toilet tank and a few super-rad towel hooks completely revived my tiny rental bathroom.