Double-Height Glass Cabinets Were Nonnegotiable in This L.A. Family’s Home

The splash of color, however, was a happy surprise. 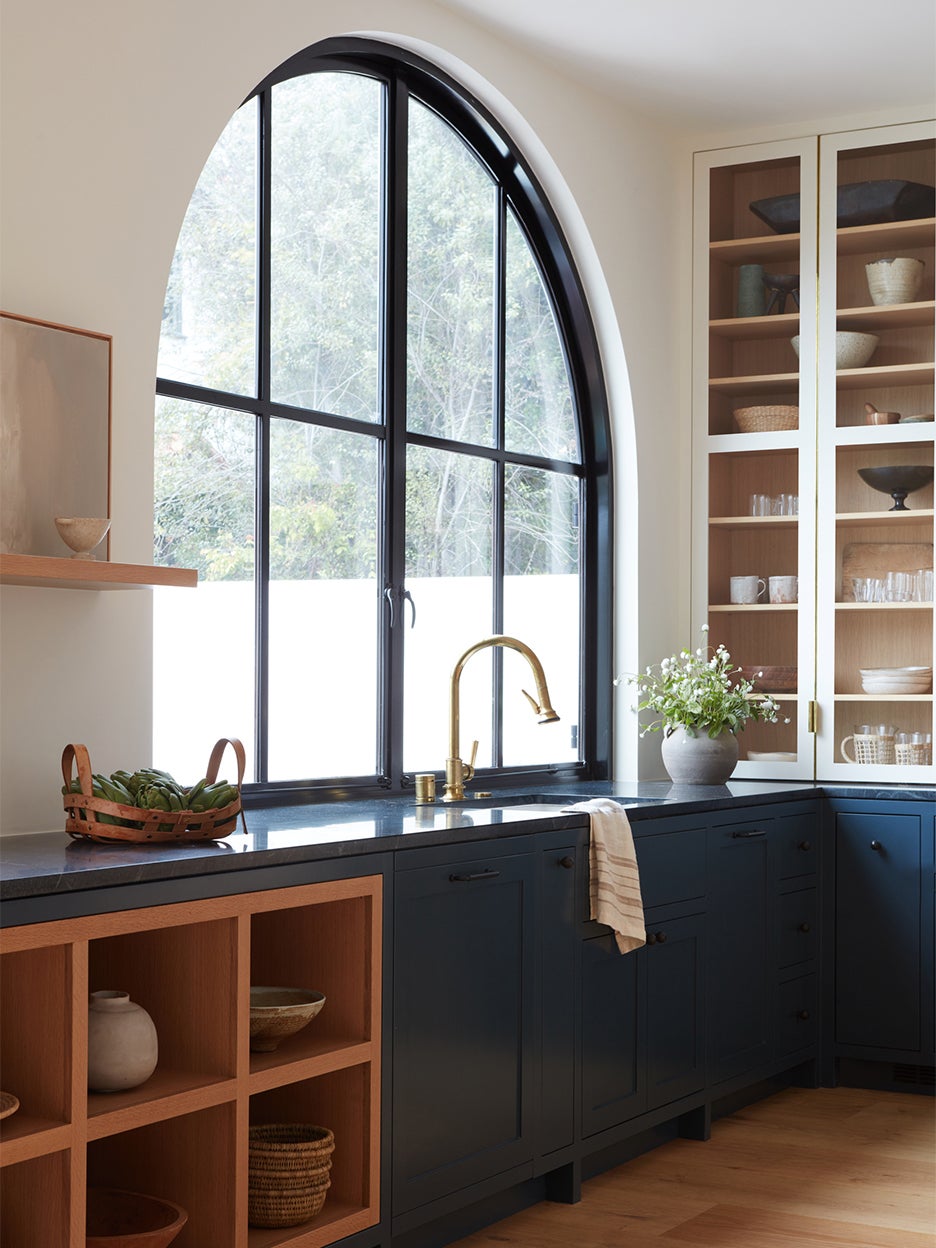 After moving out of their 900-square-foot bungalow in Venice Beach, California, a year and a half ago, Ashley Lewis and Jim Gilio spent almost 12 months couch surfing at both their parents’ houses (with their newborn, Bodie, in tow) while their new place got a gut renovation.

The pair didn’t buy the home for its charm, though it did have a gingerbread house vibe and pitched roof that Lewis adored. “It felt really cozy, charming, loved, and lived-in,” says the founder of CBD brand Fleur Marche. The real draw was the location: tucked in the Santa Monica Canyon, near where Gilio, an entertainment executive, grew up (and where real estate seldomly pops up on the market, especially in the couple’s price range).

“It became clear that we needed to reconfigure things so we could have a backyard and make the best use of this lot,” explains Lewis. This meant demoing the portion of the house that snuck all the way up to the neighbor’s fence and adding 1,000 square feet to the existing space, by way of a second story, to fit a few additional bedrooms.

At the top of Lewis’s must-have list, though, was a large kitchen that opens to a family room, where the family could watch TV while she cooked. They called on Annie Ritz and Daniel Rabin of And And And Architecture Studio and Caroline Schoppe and Lexie Sokolow of Studio LifeStyle, respectively, for help—and a creative push. “I’m very grateful that the architects had the vision for colorful things, because I want everything to be all white, and the navy cupboards really add to the room,” says Lewis. One nonnegotiable, however, was the glass doors on her upper cabinets, in which she wanted to display her favorite dishes. Lewis organized her stash inside from most frequently used serveware at the bottom to occasional pieces at the top.

A large arched window by the sink doubles as an outdoor bar on the other side and softens the architecture, one of two main design throughlines in the house. The other, oakwood details, is found in almost every room. Here, it’s in the form of open cubbies tucked in the lower cupboards for bowls and cookbooks. Across the room a low-slung media cabinet with floating shelves in the same material creates cohesion between the two spaces.

“It became clear that we needed to reconfigure things so we could have a backyard and make the best use of this lot.”

Arched hallways bookend the rooms, both featuring built-in oak storage (what else?). One side serves as an entryway console, while the other doubles as a fully stocked bar and opens up into Gilio’s home office—one he’s been extra thankful to have during quarantine (the family settled back into the house in July). “They all align with the back and front windows,” notes Lewis.

Decorating for Working From Home

Instead of a traditional desk setup, Gilio opted for a round stone table from which he can look out to the front door and the living room. The workspace is the only room that departs from the light and bright palette present everywhere else; Lexie Sokolow of Studio LifeStyle picked a navy shade to appeal to Gilio’s more daring approach to color—and to complement a cherry red mid-century pendant lamp.

White oak did make it to the main bedroom, though. Sokolow imagined a large muted green bed frame with built-in wood nightstands to anchor the space. “A lot of our clients want to have storage, but they are very minimal; we were able to do these open shelves,” says the designer.

Ritz and Rabin continued the hardwood floors into the master bath to keep the eye on the view out the picture window, which offers a glimpse of the ocean from the skylit bathtub. A wall nook, framed in signature oak, holds bath essentials. “I had never been a bath person, but I’ve definitely become one now,” says Lewis. “I can close the two doors and no little people can get to me. It’s very quiet and peaceful.”

The object in our home that gets the most use: The coffee maker!

Our biggest splurge: The steel doors.

This texture is so us: Rattan (we have it in three places in the house and I love it)!