The Kitchen Doubles as a Library in This 350-Square-Foot L.A. Rental

Elsewhere, a bed is tucked into a curtained-off nook. 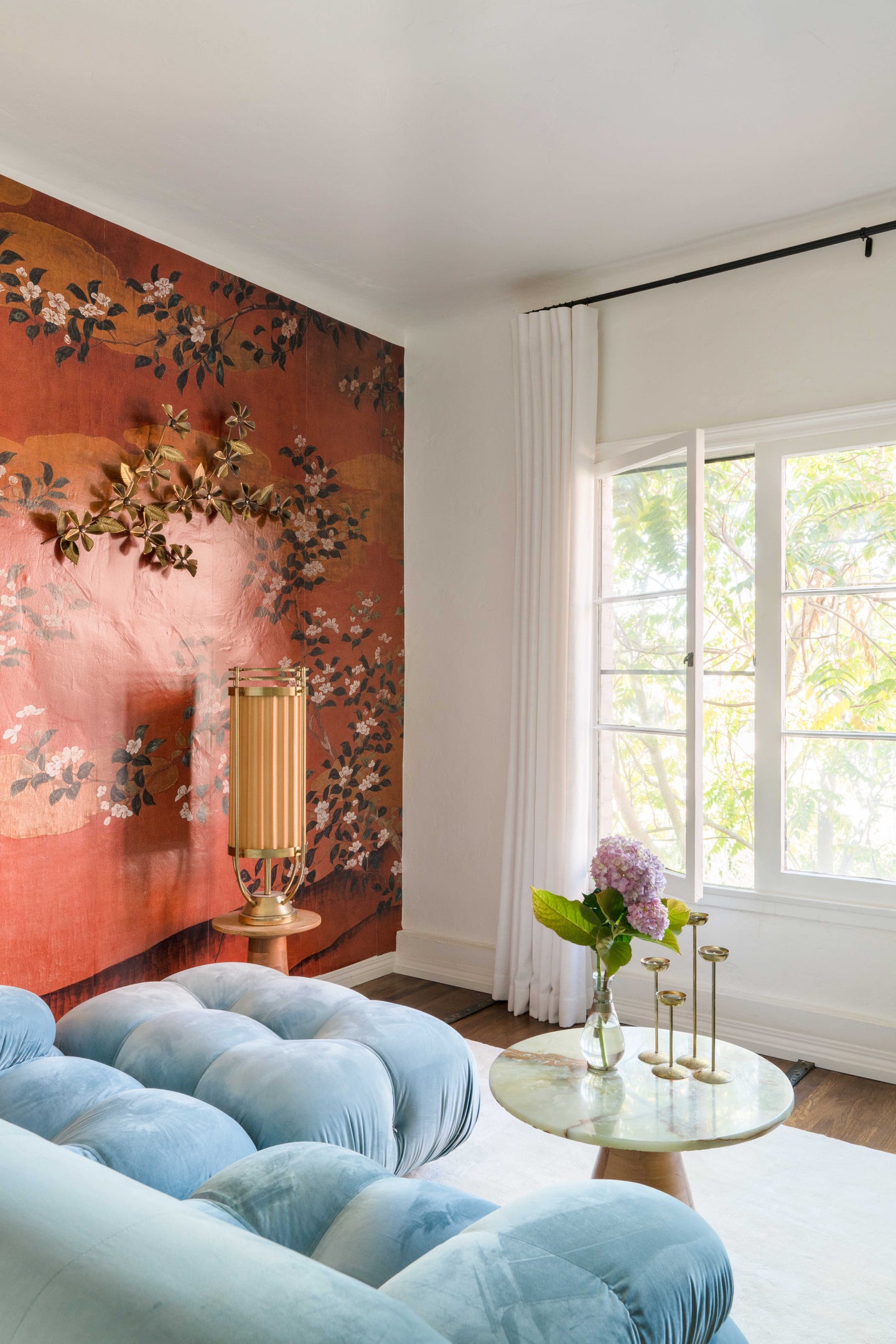 In a city where brand-new builds pop up on a weekly basis, designer and architectural historian Jaya Williams was attracted to Los Angeles’s rich history. Her previous apartment was a Spanish gem in Silver Lake; her latest 350-square-foot place is tucked into a 1926 Art Deco building in Echo Park that still features its original lath-and-plaster walls and wavy glass casement windows, a rarity in the city. “There aren’t a lot of homes or rentals that haven’t been plastered over or redone,” says Williams. Moving in—and using the home’s past as a source of inspiration for everything from the french-return curtain rods to the smart use of space—was a no-brainer.

The unit’s high ceilings and living room windows was the deciding factor during her search, and they now serve as a focal point; rather than face a television, the baby blue sofa looks out on the opening. “I wanted everything to revolve around the windows, which, being on the fourth floor, open right into the treetops,” says Williams. It feels like she’s in the middle of Elysian Park.

Japanese wallpaper adorns one wall of the space and boasts an additional dimension with a floral brass work fixed on top. Williams received it from a friend after they inherited a home from a Japanese relative in Monterey Park. “This sort of exoticism was pretty prevalent in the Art Deco period, particularly in Los Angeles. The city was a flamboyant, experimental, borderline absurd space for design—see: the Egyptian Theatre and Frank Lloyd Wright’s Mayan-influenced textile block houses, as well as his experiments in Japanese modernism,” says Williams of the design’s subtle nod to the building’s background.

The apartment has an unusual layout—two protruding walls form an L shape and jut directly into the living area—but it only inspired Williams to squeeze a queen bed into the resulting nook. “It was certainly not a bed before! All it took was building three simple drawers and templating it to the space,” she admits. After upholstering a foam bolster in mohair for the headboard, she enclosed the space in velvet curtains. An orange cocoon fixture hangs over the bed, repurposed from table lamp to pendant to suit the nightstand-free enclave.

The kitchen doubles as a library; you’ll find her vast collection of books stretching across two floating shelves above her fridge, the only available vertical space in the unit. “I’m always planning to get rid of some books but it never happens,” says Williams.

Every surface is carefully appointed this way. “I always say I have absolutely no space for throw pillows in my life, both metaphorically and literally,” she says, laughing. When working from home became the new normal due to COVID-19, Williams carved out a formal workstation in an unlikely spot behind a structural wall. “I had to find a desk that could conform to precise and bizarre dimensions,” explains Williams. “That was tough!” With limited square footage to play with, she notes she is constantly assessing how she lives and what essentials she really requires: “Figuring out what you really need sounds unsexy but really, what’s sexier than that?”

Bookmarked decor sites: Online can be a great place to find vintage furniture, and it gives you more room to think and plan. I start with the larger aggregate platforms like Chairish, Etsy, and 1stdibs, and keep tabs on auctions and estate sales.

Go-to vintage lighting source: I have a soft spot for Soviet-era lighting—it’s space age with a twist of isolation that makes it unlike anything else in the world, and eBay is a total trove of rare but inexpensive examples of it. If you have an appreciation for the material and craftsmanship, and the patience to restore things, it can be so rewarding—and affordable.

Under-the-radar design destinations: Go to a local stone yard and ask for remnants—oftentimes there is a gorgeous chunk perfect for a small table. A few years ago, the city was tearing down the Sixth Street Viaduct that connects Boyle Heights to downtown Los Angeles and giving away pieces of it. It was this iconic 1930s concrete Art Deco bridge that has been in seemingly every movie under the sun. So I got some remnants and made bookends out of them. One day I want to turn them into light fixtures. I remember a guest juror at a critique in grad school once said that “furniture is really a bigger version of a still life,” and I always keep that in mind.

I’m always inspired by: Formative Modern. Gaby has an incredible gallery of early modern design—she really knows her stuff and puts such care into her object curation.

Curator on my radar: Monte Visión’s collection is like a desert fever dream.