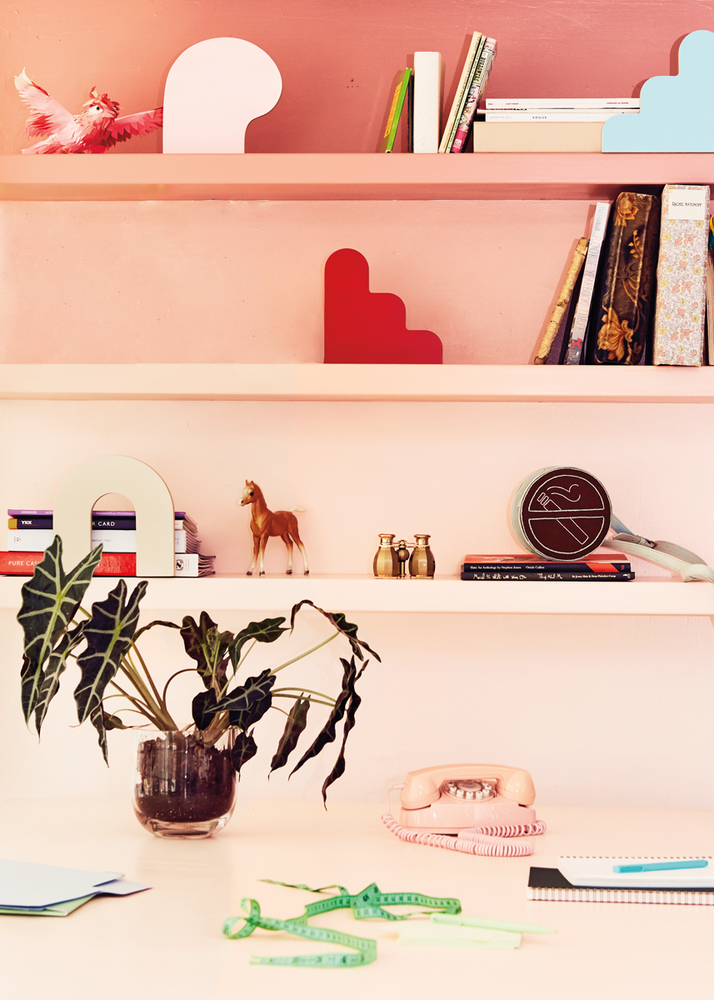 visit to the same building as the domino offices, womenswear designer Rachel Antonoff happened to mention her love of the magazine, and peeked her head in to ask for an introduction as soon as she realized the happy coincidence. For months she had been hoping to redesign her office. “There was always a running list of things we wanted to do, but we never seemed to have the time or the budget,” Antonoff explains. After meeting our style editor, Elaina Sullivan—already a devotee of the designer’s pop culture–winking, work-ready dresses and separates—the two immediately hit it off, and they jumped at the opportunity to collaborate on the project.

Antonoff had a concept in mind for the main floor, which housed her showroom, meeting space, and worktables: “I had seen ombré stairs in tonal pinks somewhere and was obsessed with that idea.” The domino team set to work on re-creating a similar gradient effect on a shelf system that would live adjacent to a large desk and worktable. Pratt & Lambert Paint generously donated a palette of pinks, and a vintage Vogue layout provided more pretty color inspiration. The final result is a bold, feminine centerpiece—and the perfect home for the antique telephone Antonoff used in her Fall 2016 presentation, which included a musical number from How to Succeed in Business Without Really Trying (yes, really). The domino crew then built sliding doors to conceal Antonoff’s storage closets—which now double as a pin-up mood board for future collections—and crafted desks and drafting tables so her staff can organize and move their daily work off the main floor.

Antonoff envisioned a garden oasis for her roof deck—and a place to kick back with her team. Green Artificial Grass $19 homedepot.com; Poly Terrazzo Rectangular Planters from $168 jamaligarden.com; Pratt & Lambert paint in Brush of Pink prattandlambert.com ON RACHEL: Jumpsuit by Rachel Antonoff

he last action item on the agenda was reimagining Antonoff’s roof deck. “We really loved the idea of it over-flowing with plants,” she says. Sullivan installed Astroturf and brought in palm trees and other tropical plants for a fun, retro vibe. The cherry on top? Painting the surrounding walls a pale pink to match the new shelf. “The office is such a better representation of us than it was before,” says Antonoff. Welcome to la vie en rose.

The redesign integrated many of Antonoff’s passions: an abundance of plants, the color pink, and an inspired space for creative productivity. Her new dreamy mural by Naomi Clark of Fort Makers adorns the loft ceiling, while the starring elements in the redesign, the custom shelves and desks, were designed by Nathaniel Wojtalik.

A pretty pink on the desk base grounds the room.

Brush of Pink by Pratt & Lambert

Mauvey peach eases the transition to the middle shelf.

Moss green stands out against the pinks on the ceiling.