36 Restaurants Where the Food is a Work of Art

Bypass Snapchat and head straight for Instagram—you’ll want a permanent record of these gorgeous dishes. 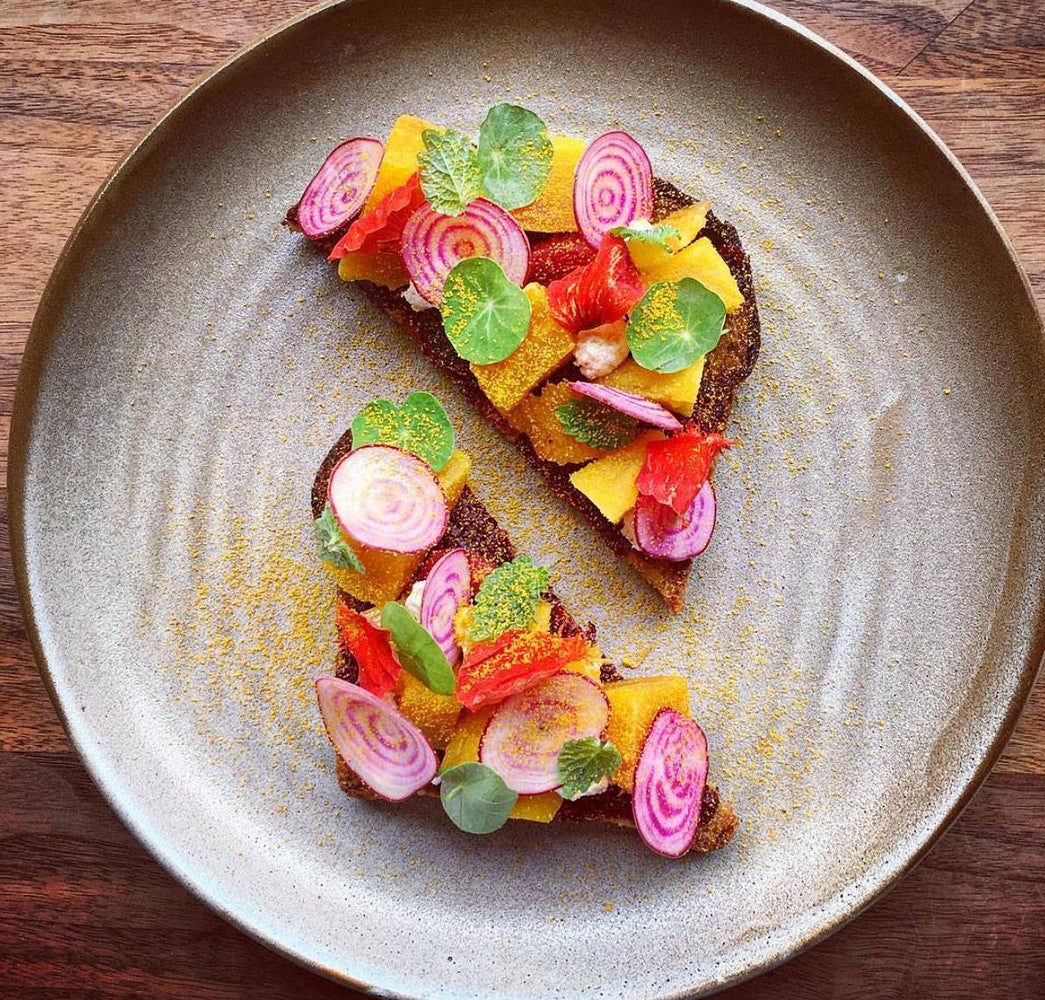 Like a Jackson Pollock painting, but with asparagus and “ink tuna mayonnaise.”

Order the forager’s salad, and get a verdant wreath of greens (and pinks, and purples) at this NYC vegetarian hotspot helmed by vegetable genius, chef Amanda Cohen.

When this lush, leafy bowl of chilled pea soup lands on your table, you have to decide: Slurp it up, or take it home to add to your terrarium collection?

This tiny sliver of a seafood spot serves up incredibly fresh fare. Case in point: dayboat scallop crudo with blood orange ponzu sauce, trout roe, asparagus, and radish—as bright on the plate as it will be in your mouth.

Summer in an oyster shell. Rhubarb ice lends a pop of soft pink to a briny, warm-weather staple.

Put a bird on it. Duck foie gras and pigeon terrine with apricot marmalade and pistachios nest atop a playful plate at this world-famous destination in the heart of Napa Valley.

Meet the suckling pig Coppa di Testa. Has headcheese ever looked so lovely? No, no it hasn’t.

New York City may be known for its cheesecake, but chef Daniel Humm’s version, with a precisely placed crown of berries and a perfect scoop of white currant sorbet, makes all the rest seem underwhelming.

Dessert or fascinator? This lavender mousse and blueberry gel, dotted with a bouquet of delicate buds, could be mistaken for something Princess Kate would wear on her head.

With geoduck (a misnomer, it’s actually a type of clam) and green strawberry, this barley porridge is rustic at its most refined.

Shrimp escabeche on a platter of coordinated dyed wool—inspired by Peruvian flavors and customs—make a thoughtfully presented rainbow of rich, vibrant colors and tastes.

How could you bear to crack open this delicately beautiful “glass” apple? Upon learning it’s made from blown sugar with an apple sorbet core, resting on a pastry of lemon verbena-marinated apple balls and salted caramel, you’ll find a way.

No, it’s not the ubiquitous Coachella accessory. This crown of matcha, dark chocolate, and lemon balm is way more delicious. (And way less cliché.)

A vivid burst of color, seemingly the result of hurling a handful of blood orange and beetroot at a stark white plate, was actually achieved with meticulous, intense precision and a trusty set of tweezers.

Inspired by St. Basil’s Cathedral in Moscow, this lemon meringue pie features perfect peaks and a sprinkling of gold and petals for a little extra sparkle.

Trout tartare is tucked under a flawless hemisphere of purple daikon radish. However long you have to wait for the chef to create this masterpiece, it’s worth it.

A humble bowl of risotto is transformed with sunflower, sprouted seeds, and a simple sprinkling of leaves and petals at this perpetually packed spot with an innovative tasting menu.

With a rotating roster of some of the world’s best chefs, there’s always something equal parts beautiful and delicious on the menu. Here, French chef Jean Sulpice (recipient of two Michelin stars) shares a sunny slow-cooked egg with crawfish and mountain herbs.

If the Bachelor handed out one these roses—crafted from sliced rhubarb, kelp, and rose oil—he’d have a much better shot at finding true love.

Grape “bubbles” and a coral-like crisp set against the backdrop of the soft green dish are reminiscent of the sea.

While this award-winning restaurant is known for inventive dishes using simple, regional ingredients, owner and chef Ben Shewry’s “potato cooked in the earth it was grown” stands out as one of the most beautiful examples. It’s carb loading for the sophisticated set.

Crab, lemon, and radish are served on a dish inspired by Matisse’s cut-outs.

Timeless birthday party fare gets a modern makeover. With rhubarb sorbet and buttermilk cake, this is the fanciest cake and ice cream combo around.

The Whitney Museum’s in-house eatery knows something about art. This pole bean salad is a colorful, expertly plated garden of earthly delights.

At this three Michelin-starred Chicago restaurant, the “Fauna” menu features a deeply-hued pink and fizzy pear-beet cider, making us want to track down the precise pantone color immediately.

This sleek spin on the traditional Italian dessert torta mimosa highlights another one of our favorite colors. “Yellow is Bello” comes from this year’s top spot in the World’s 50 Best Restaurants and features meringue, yuzu, lemon cream, sponge cake, and a dusting of gold over the plate. Super casual.

Sheets of pickled daikon cover salmon while a sprinkling of pepper—like an artist’s pencil point stippling—finishes off the plate.

At Eric Ripert’s French restaurant in NYC, “The Fish is the Star of the Plate.” This seared langoustine-foie gras illustrates that point with a delicate study in contrast and negative space.

French for “the white bird,” L’Oiseau Blanc was the name of an airplane that attempted the first non-stop transatlantic flight from Paris to New York. A nod to its namesake, dessert at this rooftop spot in Paris’s Peninsula Hotel resembles the nose of a plane with chocolate, berries, and two little hazelnut shortbread propellers.