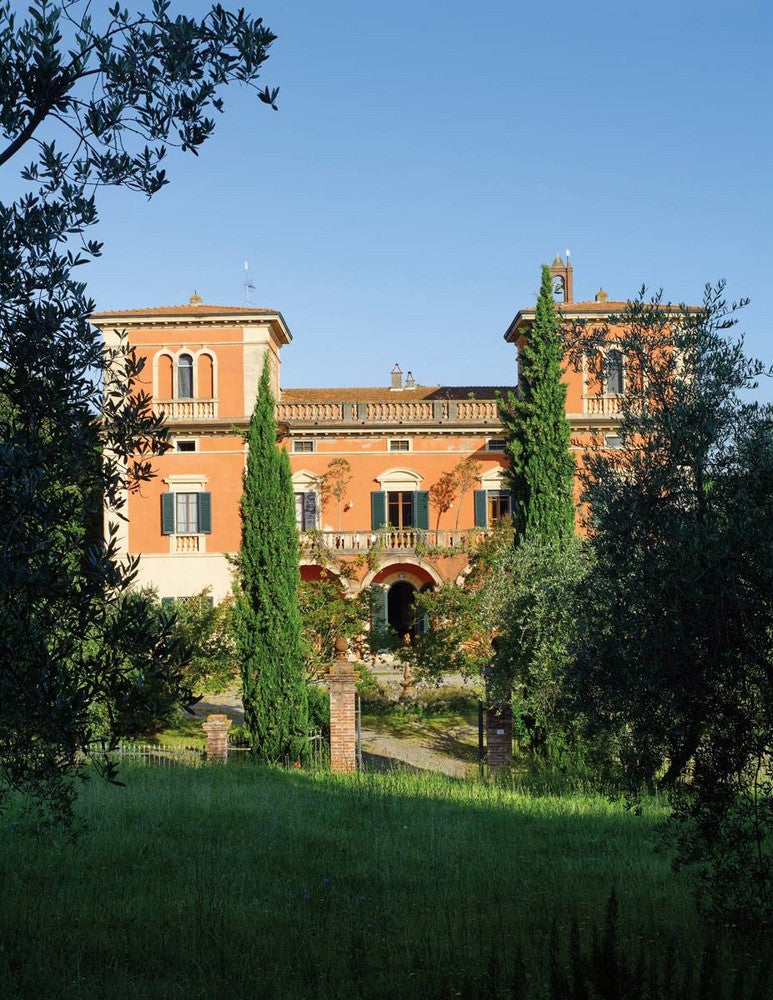 The main villa dates back to the 18th-century.

A HYBRID OF BOHEMIAN HOLIDAY RETREAT AND ARTIST RESIDENCY,VILLA LENAIS A HAVEN OF CREATIVITY TUCKED AWAY IN THE TUSCAN HILLS.

Aperitivo hour with the artists and guests kicks off Monday evenings behind the Villa with organic wine from the estate’s vineyards.

“The nature here overwhelms you it’s so bountiful and wild,” says co-founder Lena Evstafieva, pictured below with her husband Jérôme Hadey; striking shapes and colors can be found in every corner, like this cactus casting its shadow.

PERHAPS THE MOST STRIKING ELEMENT

of Villa Lena, an 18th-century Tuscan estate-turned-hotel that’s also a thriving artist residency, is the con- vergence of nature and culture. “We try to weave the two together whenever we can,” says Lena Evstafieva, whose family bought the 1,300-acre property in 2008. Along with her husband, musician Jérôme Hadey, and nightlife entrepreneur Lionel Bensemoun (of Le Baron fame), Evstafieva took on the daunting task of renovating the estate, reopening it in 2013. The final touch: having artist and entrepreneur André Saraiva pen the Villa Lena logo in chic handwritten script.

Far from a stuffy time capsule, the interiors feel refreshingly contemporary while still rooted in place: Italian design from the 1970s and ’80s, like the colorful Ettore Sottsass “Tahiti” lamp and a tiled white table from Zanotta, look right at home alongside the minimalist, rustic furniture, much of which was sourced from inexpensive thrift shops in nearby Florence. Pieces found around the property were reimagined, too, with wood boards discovered in a warehouse being transformed into a boxy sofa and chairs, and old curtains getting hand-bleached and sewn into pillow covers to reflect the airier surroundings. The idea is to “keep it old but interesting,” explains Evstafieva.

Art works made by former residents are scattered throughout the property, including this mobile by lighting designer Ana Kraš, who also co-created the wall piece with Julie Ho of Confetti System.

Of course, the real draw is the impressive roster of creatives who come to stay a few months at a time, each making new work and adding another layer to the place—whether a textile hanging on a wall (a collaboration between Julie Ho of Confetti System and designer Ana Kras), a sculpture perched on a bedroom side table, or one of the many pieces you might happen upon while exploring the villa, such as a cactus dipped in cobalt paint. The overall effect is like being in a living gallery, or “organism,” as Evstafieva describes it. Artists and guests mingle in the peaceful communal spaces and partake in a full calendar of activities—including classes in landscape painting and songwriting, as well as open studios and the Monday night aperitivo on the shaded lawn behind the property.

Artist Oliver Clegg (top) takes a break in his space, while his wife, artist and designer Natasha Chambers (below), works in one of the studios. “I came thinking I was going to be drawing landscapes but I ended up zooming in on these little flowers and drew them in highly illustrative detail,” she says.

The backdrop to this creative laboratory is the landscape itself, a fertile expanse where fennel, asparagus, and fragrant lavender grow wild and plentiful, along with fig and lemon trees, which dot the grounds. The organic farm produces olive oil and wine, while seasonal fruits and vegetables from the garden make up the restaurant’s daily menu, which is dreamed up by visiting chef Alexis Delaney of Brooklyn Italian eatery Franny’s. Come fall, Evstafieva forages for white truffles and serves them in pasta—“the best thing that can happen to anyone,” she says quite convincingly. In a place where people from around the world come together and almost everything flows in abundance—natural light, food and drink sourced from the land, and especially creative inspiration—there is a sense that Evstafieva and the Villa Lena team have truly mastered the art of a holiday retreat. “The artists here are wonderful not only for creating,” she says, “but also for bringing incredible soul to the environment.”

Textile artist Hazel Stark foraged native plants from the property to create pigment dyes for yarn and linens, which are then used at the Villa;

a volunteer tends to the vegetable garden.

A peaceful kitchen in one of the guest rooms; visiting chef Alexis Delaney explores the grounds, where many of the ingredients featured on the menu are sourced; the lush garden is full of plants that can be made into medicinal teas.

In the reception area, classic moldings play off modern touches, like the furniture designed by interior designer Clarisse Demory, who helped refresh the hotel before it reopened.