“It’s the key that unlocks a deeper conversation.” 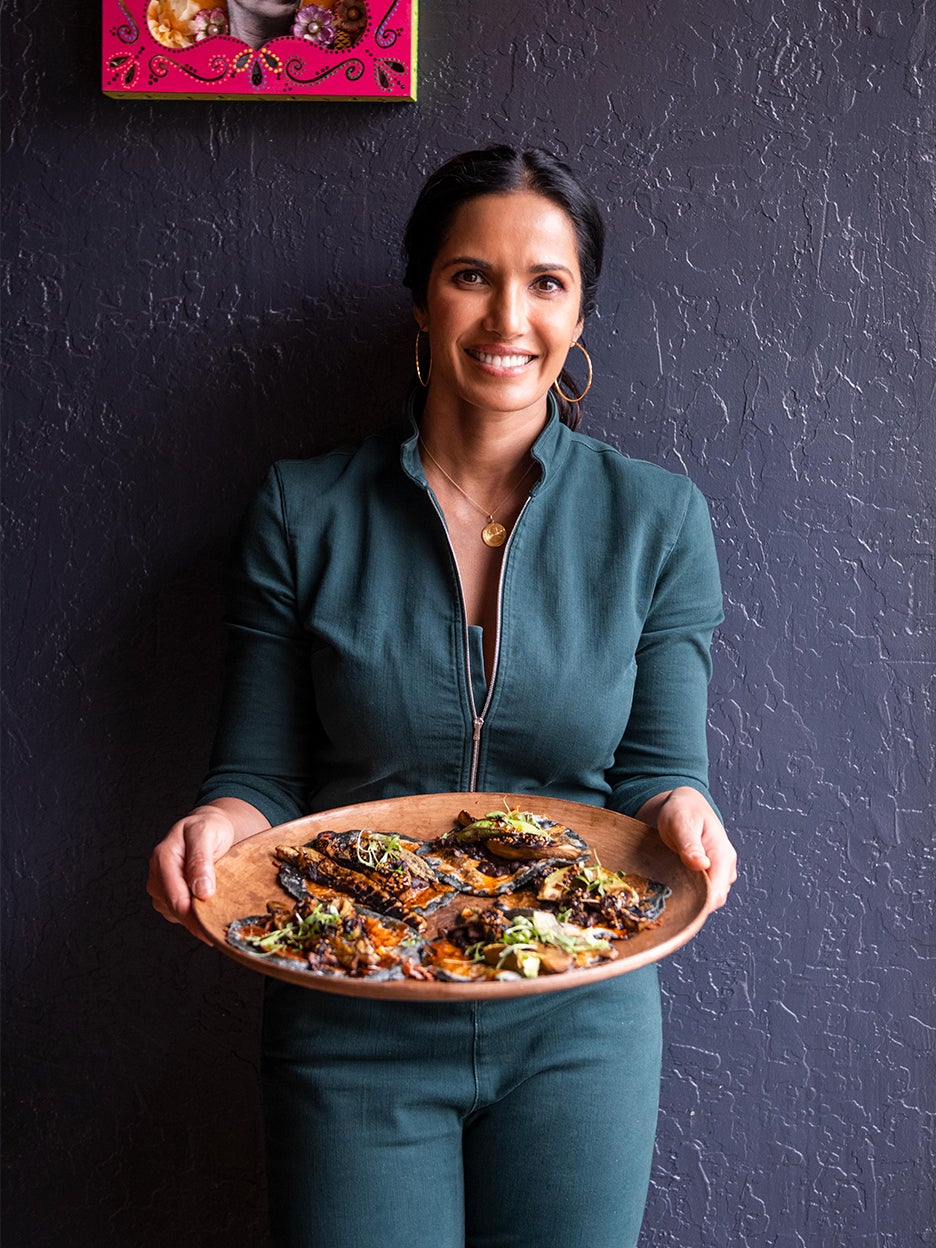 Padma Lakshmi is not afraid of a challenge—in or out of the kitchen. Since she burst onto the scene in 1999, the 49-year-old food expert, immigration rights advocate, and author has written three cookbooks and a memoir; hosted the series Planet Food and Padma’s Passport; and found fame as a host, judge, and executive producer on Top Chef. Her new show, Taste the Nation—which premieres on Hulu today— combines her passion for cooking with her political and philanthropic work to do what she loves most: bring people together through food.

In the 10-part series, Lakshmi visits immigrant and Native American communities across the country, starting intimate conversations about the food and people that have shaped our culture. From exploring Mexican food and heritage at the border in El Paso to learning about the Gullah Geechee community in South Carolina, Lakshmi shines a light on communities while reflecting on her own experiences. (She emigrated from India to the U.S. with her mother when she was 4.) “The whole show is about bringing people together, getting to know our neighbors, and trying to take that otherness away that keeps us at arm’s length,” she says. “Food is just the key that unlocks the deeper conversation.”

While Lakshmi spent all of last summer traveling and filming the show, this year, of course, looks different—she has been sheltering in place with her partner and 10-year-old daughter, Krishna, on Long Island for the past three months. All that togetherness has been “good for us,” she says, since she was away from home for much of last year. She and Krishna have been working on homeschooling, learning new TikTok dances, and, naturally, cooking together a lot. (This week they tried chicken and dumplings from Toni Tipton-Martin’s new cookbook, Jubilee.)

On a Zoom call from her brightly lit home office, Lakshmi told Domino all about her new series and “giving the microphone to the people who actually make the foods we love in this country.”

What is the core message you hope people take away from the show?

We talk about family a lot in this series. It’s not a travel show. We’re really getting into the nitty-gritty—we’re getting into the struggles that people have had. In the Gullah Geechee episode, we’re trying to give credit to some African-Americans who have come to our shores with a robust food knowledge, heritage, and ancestral lineage. We often don’t talk about African-Americans outside of the context of their connection to slavery. But they came from West Africa with knowledge of rice cultivation. That’s why they wound up in the Carolinas. It’s no accident that the rice industry in South Carolina floundered very quickly after emancipation.

The premiere is quite timely. What was the journey that led you to filming?

It was really because of my work with the ACLU. I got involved with the organization shortly after the 2016 election to do some work on immigration rights. I’m an immigrant, so the issues are very personal to me. And then I just wanted to research other people’s stories—I got sick of always self-referring when I was doing these rallies or speeches. I first thought it would be a cookbook, because we often don’t hear from the people who make the ethnic foods we love in this country. So I did the research for that, and then I was going to do a TV program on immigration. My producing partner and I decided to blend the two ideas.

What is it like for you to promote the show right now—something you did traveling the country—while a lot of people are stuck at home?

It’s been a little awkward, as you can imagine. You feel kind of odd promoting a show when there’s so many important things to discuss, but I guess I’m lucky that this series actually addresses a lot of the issues that are on people’s minds right now. And for me and many people of color, these are not issues that just came up now. This has been a long time coming. So I think, I hope, that it’s very appropriate.

The issues you’re referring to being racism and the erasure of certain cultures?

Racism, and colorism, and the fact that certain communities in America who have been a vibrant part of the cultural fabric and the economic success of this country have not been given a mainstream platform to talk about their culture and their foods. We don’t even teach African-American food in culinary school, and we should. We should encourage more Black and Brown kids to go to culinary school, to get into the culinary arts. Because most restaurants, if you look in the backs of their kitchens, they’re run by immigrants. But then it’s rare that the immigrant makes it to head chef or even sous chef. So this is a show that gives the microphone to the people who actually make the foods we love in this country, whether that’s tacos or sushi or pad Thai.

From whom did you learn the most, both in terms of cooking and culture, on the show?

I probably learned the most from Rosa Carhuallanqui in the Peruvian episode. I never knew you could make tamales from cassava and rice—that was a revelation to me. I also learned a lot from Twila Cassadore in the Native American episode, because I’ve never foraged for my own food. I wouldn’t know how to spot a wild onion. But once she showed it to me, then I could look for it on the desert floor.

When I’m looking at that Arizona desert, I’m just seeing barren desert. But when she looks at it, she’s saying, “You can eat that. You can eat this.” She caught the pack rat that we ate, and she taught me that you don’t necessarily need salt. I was terrified of eating pack rat without it. I mean, I was just terrified of eating pack rat, let’s be real. But I had a little salt-and-pepper shaker that I had stolen from the tray on the airplane, so that I could at least season it if it was a little gamy. But it wasn’t. It was fine! It was like a turkey leg. You hear me say, “It tastes like chicken,” because it did.

What are the lessons and inspiration you brought home to your family after filming?

Just how hard people work in their own lives. How opposite they actually are to what often is said about immigrants, especially Brown immigrants coming up from the border. They’re not threatening. They’re not trying to steal your job. They’re just trying to feed their family. They’re just trying to do all the things that you and I would do for our families. So the humanity, and the dignity, and just the beautiful depth of each person whom I met was very enriching. I didn’t think I wouldn’t find that, of course, but I was really humbled by these people’s lives, by what they had to go through. Because let’s face it: If somebody leaves everything they know—their family, their culture, their country, their language—and they pick up and move to a whole new country, there’s got to be a reason. Nobody puts their child in a boat unless the land they’re standing on is less safe.

Your episode with actress and food writer Madhur Jaffrey stood out—there seem to be a lot of parallels between the two of you. She very much wanted to independently find her own path and defy cultural expectations. How did you relate to her?

Madhur, for me, was always a mentor. She’s someone I’ve admired since I was very young—I watched her on TV. As an Indian growing up in the West, I didn’t see a lot of, never mind women, just people who look like me on television. I didn’t see our stories. The only person I saw was Apu on The Simpsons, and that was just a gross caricature. So to me, seeing Madhur, who is a very talented actress and then had this beautiful writing career as an authority on Indian food, was important. She was so poised; she was so good at teaching and demystifying Indian food without losing its authenticity or dumbing it down. For her to teach me one of her recipes on the show was a bucket-list item.

What do you hope that Taste the Nation teaches your daughter?

I honestly hope that it teaches my daughter that it was worth it for Mommy to be gone all summer. I was only home on the weekends for the whole of last summer, and then I was also away to do Top Chef for six weeks, where she did come half the time. But really, I was away from home a lot. I’m lucky in that I have a partner and a coparent who could be with her and let me go do that. Not everybody has that. But it was tough on her regardless. She was not shy about reminding me about how tough it was. She’s seen all the episodes, and she just wants her mom back now. COVID-19 has actually been good for us, because we’ve had three months of unstructured time where I’m with her 24-7.