Yes, you can paint your countertops. 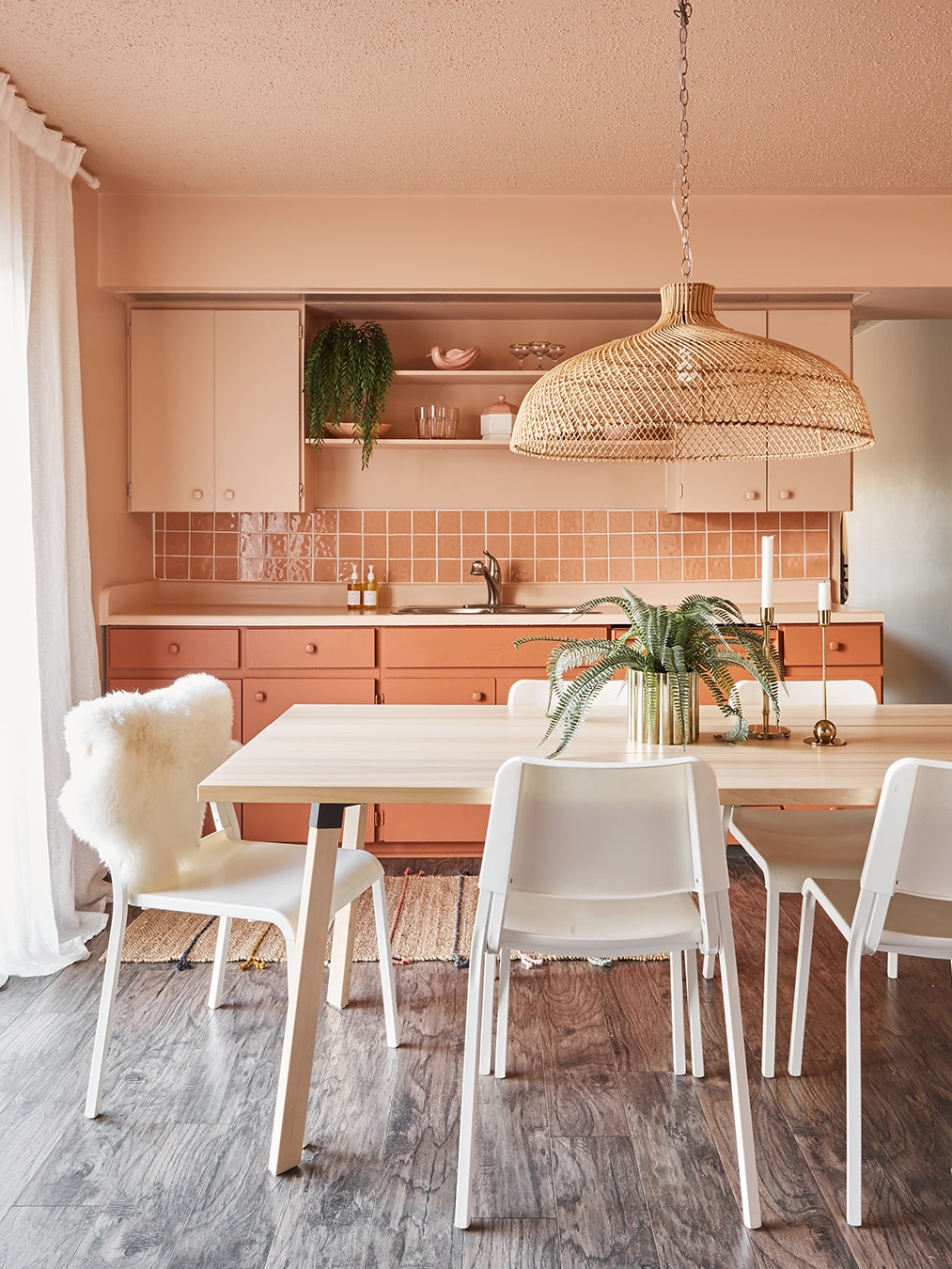 At the beginning of 2016, best friends April Brown and Sarah Sklash decided it was time for both of them to leave their desk jobs. Brown, who was working at a PR agency at the time, and Sklash, who was employed by the Ontario, Canada, government, sat down and brainstormed 50 joint business ventures. “And one of them was this adult camp idea,” recalls Brown. That nugget eventually evolved into the pair buying and renovating a dingy roadside motel in Prince Edward County. Then they bought a second one in Sauble Beach—a serious fixer-upper that became the focus of the June Motel founders’ new Netflix series, Motel Makeover.

“It very much had a 1970s feel to it,” says Brown of the Sauble Beach property. Picture wood paneling everywhere, dark brown furniture, floral duvets, and fluorescent lights. With one hospitality space already under their belt, Sklash and Brown had a good idea of what not to do—particularly when it came to divvying up their budget. The designers spent $14,000 on large windows and sliding doors that introduced natural light to the lobby-slash-shop space and donated salvageable furniture and lighting when possible to save on the cost of dumpsters. (Psst: Throwing things out can get expensive.) Then they went on the hunt for affordable materials to balance out their accounts. “So often, we dream really big and go to expensive stores to get the ideas, but then spend time scouring online for something similar from a big-box retailer,” says Sklash. Once they know the gist of the thing they’re looking for (color, size, style, finish), it’s easier to refine their search terms when they’re, say, hunting for pink terrazzo tile on Home Depot’s website. Ahead, Brown and Sklash break down five fresh, budget-friendly renovation ideas from their motel makeovers that you can easily try at home.

Brown and Sklash found salmon-colored square tiles at Home Depot Canada that were just over $2 per square foot. “The organic texture made them look way more expensive than that,” says Sklash. They loved the product so much they ended up using them in the residence kitchen backsplash and the double room bathrooms. Then came the grout. “The first one we used was a dark charcoal color, and it was a bit of a failure,” recalls Brown. Redoing the lines in a crisp white gives it a contemporary spin, ensuring the tile looks like it’s from 2021, not 1981.

Benjamin Moore’s peachy blush Apricot Beige has become the renovators’ go-to paint color for basically everything, including cabinets. Peep the hue in the Sauble Beach shop where the pair hacked simple IKEA cupboards by swapping out the doors for flat fronts from Kitch, a brand based in Canada that is similar to such companies as Semihandmade and Nieu. Opting for Kitch’s sleek style in a plain wood finish, though, meant they could further customize the doors. Think of it as a hack on top of a hack.

Painting your existing kitchen cabinets is an obvious way to keep costs low (new cupboards can range from $2,000 to $24,000 for a typical 10-by-10-foot space), but have you ever thought about tackling the hardware and countertops with your brush, too? The key is to go monochrome. In the designers’ resident kitchen at the motel (a space that isn’t getting used by guests), they went pink on all the surfaces. “It’s a good short-term solution,” says Sklash, especially for anyone who doesn’t have the funds to complete their dream reno but wants to live in an aesthetically pleasing space in the meantime. “Every month or two you might have to make a touch-up, but it’s livable,” she adds. Another countertop save: Opt for 2-by-2 tiles over a slab of stone or another solid surface.

“We are big supporters of vinyl flooring,” admits Sklash. For starters, the synthetic material is actually easier to lay than hardwood boards, which ultimately helps keep labor costs down. The lock-in-place planks are also easier to clean and last longer than real wood, plus so many accessible brands such as Floor & Decor and Atrafloor make chic options.

Paint also worked wonders in the motel’s bathrooms, where Brown and Sklash kept the ‘80s-esque wall sconces but gave them an update by spray-painting the metal bases white. “It honestly made them look shiny new,” says Brown. In the double bedrooms, they kept the globe theme going by buying $20 IKEA ceiling flush-mount fixtures and adhering them to the wall as if they were sconces. File this flip under “bright ideas.”