When designer Stephen Shubel bought his San Francisco loft, it was nothing but a big, brown box. Channeling his inner Houdini, and brandishing mass-market basics, he conjured architecture out of thin air and threw in a few tricks of the eye for a magical transformation. 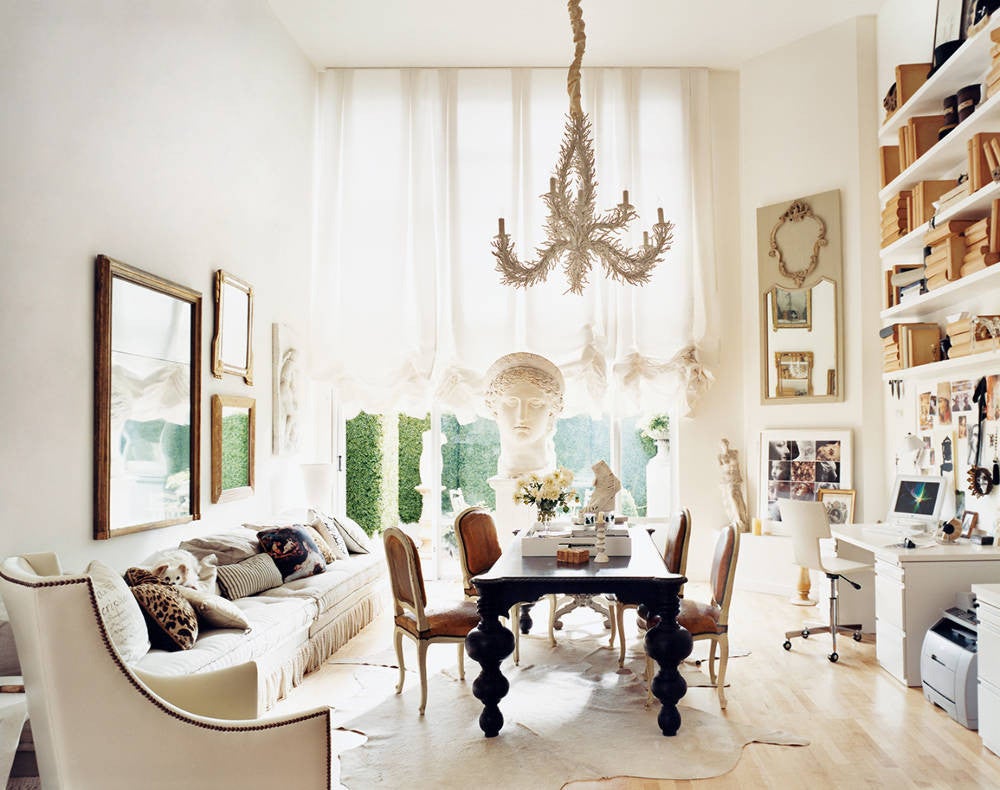 When designer Stephen Shubel bought his San Francisco loft, it was nothing but a big, brown box. Channeling his inner Houdini, and brandishing mass-market basics, he conjured architecture out of thin air and threw in a few tricks of the eye for a magical transformation.

Unified by a neutral palette, Shubel’s collection of rare finds—such as the massive plaster bust of the goddess Juno and a mid-century chandelier that’s 4′ in diameter—don’t overwhelm.

After a flood destroyed stephen shubel’s Marin County storefront studio two years back, the decorator didn’t despair. Instead, he dried himself off, bought a 1,200-square-foot loft and set about turning it into an office and overnight getaway from his full-time residence across the Golden Gate Bridge. Except for the high ceilings and windows, however, the place had little to recommend it. “I just knew I wanted to work there, and spend the night if need be. And have it feel a little French,” he says. Armed with the belief that venues such as IKEA and Pottery Barn are sources of cheap, smart solutions, he embarked on a series of clever, no-construction-necessary alterations to enhance the sense of expansiveness and forge character, then integrated a healthy dose of treasures gathered over his 30-year career. The result is a comfortable and intriguing pied-à-terre with room for work and play.

The loft is spacious, but it was painted dark brown and turquoise,” Shubel recalls. He opened it up with a pale, creamy color scheme emboldened by clean black-and- white accents and a touch of gilt (“you have to be careful, so it doesn’t look gaudy,” Shubel cautions). Hung in columns nearly all the way up to the ceiling, his cache of mostly flea-market mirrors emphasizes the room’s impressive scale, heightens a feeling of depth and amplifies the south- facing apartment’s abundant sunlight, which streams in through white sailcloth curtains.

To conceal an unsightly chain-link-and-stucco fence on the terrace, Shubel ordered inexpensive planters and installed custom plastic hedges. “They’re always green!” he explains with a sheepish laugh. “I never thought I would use fake plants, but they fit well here.” He then sprinkled in several real specimens to balance the artificiality. a folding garden table, which was white when he purchased it, rusted right away (“I left it because I like the look,” Shubel says); coupled with mismatched vintage chairs, it lends an air of casual authenticity. a striped tent shelters outdoor tools and extra furniture.

Don’t Be a Snob

Shubel may be an antiques fan, but he also relies on mass-market goods. To make the communal work-space homey, he covered bulletin boards in white fabric and tacked up postcards as art; overhead, a library effect is achieved with IkEa shelving stocked with Pottery Barn boxes that mimic paper-covered books (and store fabric swatches). Beloved objets in muted tones inject warmth. (“Even when you have all these higgledy-piggledy pieces,” he explains, “if they’re neutral, it becomes just about shapes.”) Shubel refused to skimp and get a soulless conference table, instead bringing in an astier de Villette oak design (which doubles as a dining area during parties).

The back of the main room, under the staircase, was initially used for random storage. But Shubel carved out a well-proportioned cubby by incorporating a secretary (which he painted white), a few pieces of art and a plank shelf that corrals otherwise mellow stacks of magazines and books. During daytime hours, the alcove— separated from the main office zone by a simple screen—offers uninterrupted privacy. When his work is done, Shubel can instantly tidy up by whisking the desk closed.

Have a Sense of Humor

Don’t let your eyes deceive you: The ceiling of the studio’s bathroom is completely, 100 percent flat. Shubel hired local decorative painter Willem Racké to paint stripes that make the room—another plain box—seem like a dramatically peaked tent, inspired by the circus-like storage tent on the terrace. “It’s a whimsical, playful powder room,” Shubel notes. a matching curtain hides not only a washer and dryer, but the studio’s trove of research materials. The marble wall behind the toilet and the marble-tile floor are a quietly elegant counterpoint to the spirited patterns elsewhere, but Shubel pushed to keep the overall volume high: “I wanted to wow.”

Pile on The Things You Love

Shubel’s studio is also a home away from home, after all, so in the end he needed a nook of his own. He outfitted the small upstairs bedroom with keepsakes, including several plaster pieces that add texture without cluttering. (His own reproduction line of plaster plaques, mirrors, small tables and objects will be out this fall.) antiques from shopping expeditions in Paris play a big role too: Shubel’s favorites include a pair of 1930s bedside tables found in the Loire Valley and, mounted next to the mirror, a skinny fragment from a neoclassical daybed. artwork hanging on and propped against the low wall give the niche the same low-key sophistication as the rest of the loft.