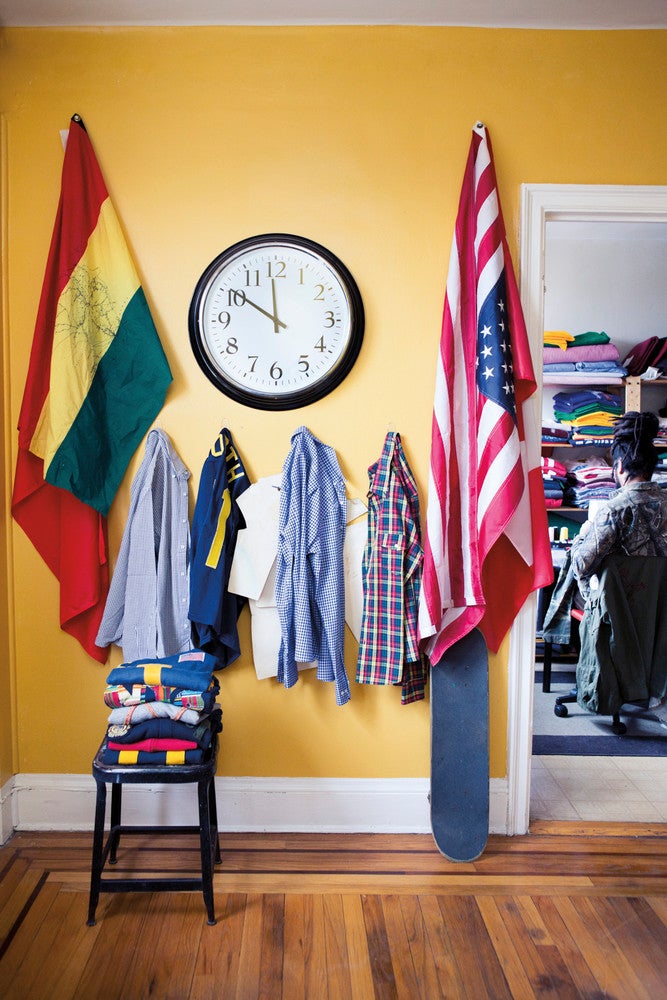 Within minutes of meeting Clayton and Christopher Griggs, it’s clear: The menswear designers and customization pros infuse everything they do with major style and personality. From their New Jersey studio, which forms a creative trifecta with their shared apartment in Crown Heights, Brooklyn, and their concept shop at Opening Ceremony in SoHo, the brothers work on LFANT (Live Free Above Negative Thinking). Launched in 2011, the line of graphic jerseys, mineral-hued chinos, and embroidered jackets looks right at home in their color-forward work space, where spools of bright thread sit alongside varsity-style felt letters. The hum of a sewing machine, tagged with layers of stickers, punctuates the roots reggae playlist.

The twins (who aren’t technically identical but certainly appear to be) are forever inspired by their love of sports and the expressive colorways of the Big Ten and Pac-12 teams. “We both played football in high school, but knew we weren’t going to the NFL,” says Clayton. “So we asked ourselves, what else do we like? Clothes and dressing up.” They headed to Miami to study fashion design—and, perhaps, absorb the town’s Technicolor—before meeting their current business partners (also, coincidentally, brothers), with whom they cofounded LFANT.

Contrasting patterns and bright hues can make a room (or an outfit) when put together with “true confidence,” says Christopher Griggs.

“Our mood board is our world cut out and put together in one place,” says Clayton. Fabric swatches, sports patches and lettering, sketches, and doodles form a window into their design inspiration.

Christopher and Clayton really got into personalized detailing after working at Nike 255 Custom Lab back in New York. The duo’s patchworked yet uniquely curated style holds strong at their Get Personal space within Opening Ceremony, where they can be found most days stitching patches on or embroidering customers’ new wares. Like enthusiastic coaches cheering from the sidelines (their sewing machines conveniently overlook the dressing rooms), the brothers encourage people during try-on sessions. “See, you can do that,” says Clayton to a guy in a particularly bold print. He seems bolstered but unconvinced. After all, not everyone has the effortless cool of the

Favorite color and how to combo

Easiest way to add color to your wardrobe

“Layers. Have a little color peeking out.”

“Accessories and pops of color, like jewelry, shoelaces, or belts.”

A selection of patches from the Get Personal shop at Opening Ceremony.