One of America’s most beloved novelists found fortune and fame in Hartford, Connecticut, the site of his family’s high-Victorian homestead. 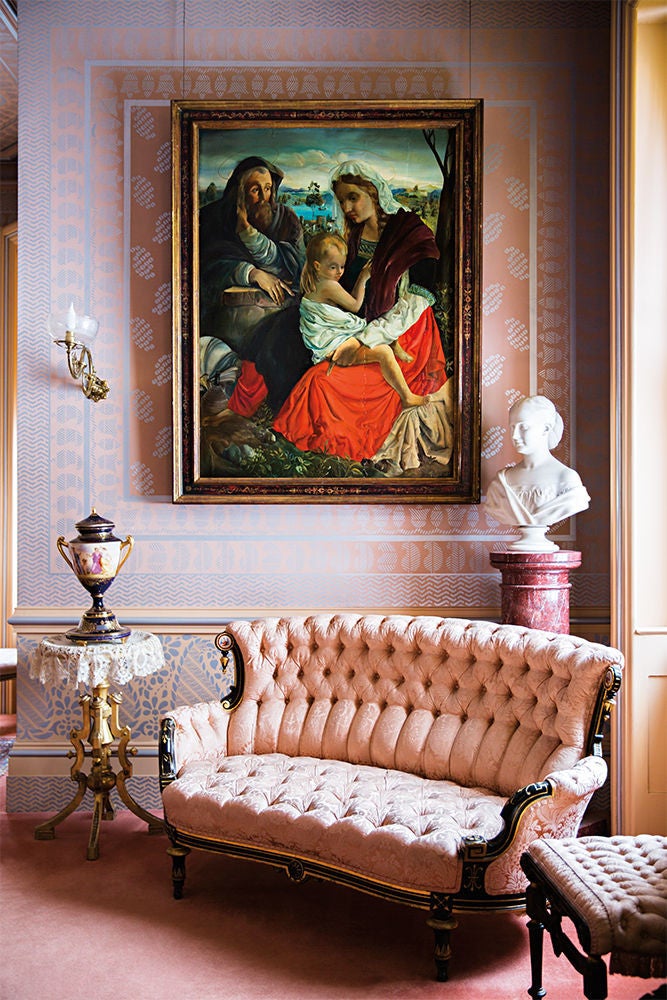 Mark Twain (Samuel Langhorne Clemens,) first fell in love with the city of Hartford, Connecticut, while traveling to meet with his publisher, the evocatively named Elisha Bliss. Besotted by the burgeoning city’s stately homes and lush greenery, Mark Twain purchased a parcel of land on posh Farmington Avenue soon after marrying Olivia Langdon in 1870. Desiring a permanent home, he employed the notable Hartford architect Edward Tuckerman Potter, a leader of the American Gothic Revival movement, to construct a roomy Victorian pile for his growing family.

Construction on the Clemens home began in August 1873, and in September of the following year, the family finally moved into the partially finished house. Much of the 11,500-square-foot structure’s decorative work, including the entryway’s extraordinary stenciling, was executed by Louis C. Tiffany and Co., Associated Artists, a group of artisans gathered together by Tiffany in the 1870s and early ’80s. Other pieces, such as the dining room’s Eastlake sideboard with medieval-style hinges, were created especially for the home. Clemens and his wife frequently traveled to Scotland and Paris with their three daughters, returning with ornate loot. In 1881, the family purchased an adjoining property, relandscaped its grounds, and extensively renovated their home. Unfortunately, these improvements proved a tipping point for their financial problems. Although Clemens wrote his most notable works—including The Adventures of Tom Sawyer, Adventures of Huckleberry Finn, The Prince and the Pauper, and A Connecticut Yankee in King Arthur’s Court—during the family’s time on Farmington Avenue, his earnings still couldn’t support his extravagant tastes. In 1891, unable to continue their grand manner of living, they left Hartford and moved to Europe, where Clemens conducted a lecture tour, moving from city to city and eventually settling in Guildford, southwest of London, in 1896. Forced to sell the property in 1903, Clemens later said that he and his family enjoyed their most pleasant life passage in their Hartford home.

A bust of Clemens’s wife, by sculptor Samuel Conkey, graces a corner of the drawing room.

The mother-of-pearl stenciling that lines the stairwell is the work of Louis C. Tiffany and Company, Associate Artists.

In Hartford, Clemens was almost as famous for hosting lavish dinner parties as he was for penning celebrated novels.

Clemens slept with his head at the foot of his Venetian bed so that he could more fully enjoy the view of its elaborately carved headboard.

This glass-enclosed conservatory, abundant with exotic and tropical plants, represented a particular luxury in snowy Hartford.

Visit the estate
Today, the residence at 351 Farmington Avenue, now the Mark Twain House & Museum, is a National Historic Landmark. Tours of the house and museum are available year-round. For more information, call 860-247-0998 or visit marktwainhouse.org.