A Handy Cheat Sheet for Decorating with Yellow

Plus, the colors that go well with it. 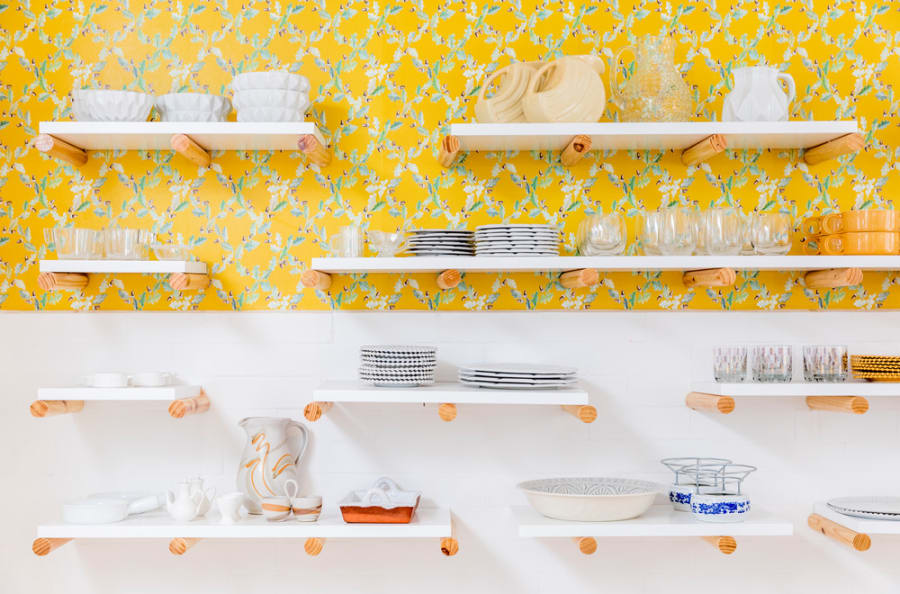 Last summer, we highlighted yellow (well…citron, to be exact) as the It color of 2017—one year later, we’re still just as infatuated with the captivating shade. From its revitalizing nature to the fearless characteristic it so effortlessly exudes, the hue has proven its staying power in the realm of design in more ways than one.
Still just as relevant, exciting, and inspired, yellow has undeniably maintained its stature at the top of this year’s design trends. Decoratively versatile, it’s not nearly as ubiquitous as the seemingly perennial millennial pink and yet, it still manages to convey a similar show-stopping effect.
Understandably, decorating with the hue comes with its fair share of challenges. For every reason why we love the color, we can think of just as many that mark it as difficult to design with—its unapologetic and often spotlight-stealing effect being a primary reason for this.
Yet, as with most things in life, the bigger the risk, the greater the reward and decorating with yellow is no exception. For those who find themselves unsure of how to bring this hue into their homes, we’re here to help. Ahead, the yellow-dominant color combos you need to know.

This duo is about as classic as it gets, one that you have undoubtedly come across—and it’s easy to see why. The subtle, sweeter properties of a blush hue downplay the intensity of a yellow, resulting in a combination that is mellow yet statement-worthy at the same time. Employ the pairing by way of a two-tone paint job—be it vertical or horizontal, we’ll leave that part up to you—to add an element of interest to a modest room that is sparse on the furnishing side. This Scandi-chic room did just that, allowing the pieces and decorative essentials to take the back seat, and the hues to steal the spotlight.

It’s only fitting that these two primary hues will pair well with one another but that said, don’t feel confined to one specific shade. Any tonal variation of the two can work—a deep navy blue can pair with an electric yellow just the same as a softer, more subdued blue.
The bucolic two-tone display spotted in Sonoma’s Scribe Winery (on the left), is proof enough of the duo’s versatile nature. While you don’t necessarily have to embrace a similar split-scheme, we can’t deny the allure this particular blend has. Alternatively, the pairing can work just as well on the exterior of a home, designer Heather Taylor’s home is all the proof we need—besides, who doesn’t love a good yellow door.

The thought of outfitting your windows with drapes of a saturated yellow finish may not be that enticing, especially for the minimalist. But, pair the pieces against an equally colorfully (although not so vibrant) backdrop and you’ll find yourself pleasantly surprised with the result. A byproduct of the primary color wheel, it’s only natural that green and yellow make for a solid coupling. That said, we’re here for a slightly moody or muted take on the hue—think a soft sage green or pastel mint with gray undertones—that will instill an elevated detail to your space.

Pairing yellow with black can easily run the risk of giving off serious bumble bee vibes but this style-focused nook proves that it can be done. The trick? Layering in a handful of equally vibrant colors (think saturated reds, stark whites, or electric blues) to offset the intensity of the base duo. Consider this a viable alternative to painting your walls yellow—revamp an existing piece of furniture with the hue instead, and set against a backdrop (as seen above) that will offer up a bold contrast. Black and yellow? It totally works.

Yet another mainstay of the classic color wheel, these two hues were definitely made for one another. Now, it should go without saying that pairing yellow with purple comes with a major intimidation factor, one that may prevent most from embracing it in the first place. And should you need a little motivation, allow this stunning situation from Italian design brand Dimore Studio to assuage all your reservations.
Realistically speaking, you’re probably not going to outfit your space with wall-to-wall purple carpeting, and that’s okay. Instead, draw on the design elements you may see here, utilizing the palette of the room as a guiding source of inspiration. Bring in a purple area rug and couple it with a bright yellow statement seat or side table for contrast.

Feeling bold? Take this unapologetically loud trio for a spin. Led by the primary wheel, this daring combination utilizes the stark tonal contrast of the colors to its advantage. Pink and yellow, as previously mentioned, make for a natural pair while the saturated blues implement a striking pop that elevates the entirety of the scene.
For those looking to recreate this one at home, a whitewashed space will make for an ideal backdrop, allowing the shade of the furnishings to take center stage instead. Note how the streamlined white framing of the furnishings establishes a momentary burst of relief from the saturated burst of color—a detail that prevents the scheme from feeling overwhelming.

Yet another coupling we may often find ourselves intimidated by, though not one that doesn’t warrant plenty of reward, decoratively speaking. We love the retro vibe of this ’70s-inspired combo, especially when it comes integrated with a handful of cooler tones. Yellow and orange together, alone, can often resemble a kitschy-esque feel but throw in a handful of blues and greens and you’ll be pleasantly surprised by the dynamic effect it results in. Take a cue from this soothing bedside, where the base pairing is beautifully layered with a thoughtful and contrasting palette.