someone give these couches an emmy... 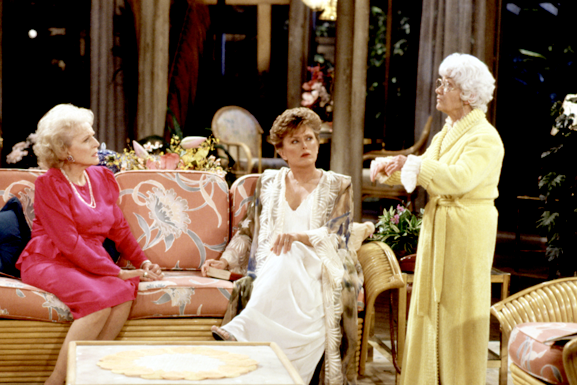 Television decor holds a special place in the heart. We’ll never forget Carrie’s closet, Monica & Rachel’s living room, or Jerry Seinfeld’s entire apartment. Here, we’ll focus on the centerpiece of any sitcom set–the couch. To think how much witty banter has been exchanged on the small screen from the comfort of a carefully chosen sofa. Ah, memories.

If this couch doesn’t transport you to 1980’s Miami, nothing will. The lives of Blanche, Dorothy, Rose, and Sophia played out in hilarious 30-minute increments from either this iconic, patterned beauty, or their classic kitchen table.

If this couch could talk, amiright? That 70’s Show proved you needed little more than a Wisconsin basement to have a great time with your besties. It’s not cute, it’s probably not comfortable, but it’s nonetheless amazing.

They (literally) don’t make ’em like this anymore. Post-1912 decor spared no detail, and presumably no expense. This sofa (settee?) and truly this whole room allow the viewer to loose themselves in time.

Adorned with the most famous afghan in television history, Roseanne’s couch served to both complete a living room and provide a soft landing for the rowdy antics of her kids. It reminds us of a time when dialog was quippy, and couches were ugly.

And here’s a couch that’s not only famous for being a couch, but it’s also well known for one particular spot.  Some of Sheldon’s best lines have been uttered from his claimed throne, and we hope he continues to do so until infinity. Bazinga.

Every 20-something woman deserves (or already has) a couch like Penny’s. It’s a starter couch. It’s comfy, it’s covered in clothing, it probably came from Ikea. Penny, we love you, and your couch.

Try to find a better example of a 90’s bachelor pad couch. You won’t find it, because it’s right here, in Martin’s living room. It was green, it was leather, it was the couch of a decade.

Perhaps the most current, usable couch, Jess adorns this piece of furniture like a witty, bespectacled throw pillow.  Television shows don’t often go for sofas of this size, but with a house this full, you kinda have to.

You knew it was coming. That orange, cast-members-only couch at Central Perk made every coffee shop in the country rethink its seating situation. It belongs in a museum, it really does.

Cartoons count, k? We don’t know if they slipcovered this thing or what, but my how this couch can last. Perfectly sized to fit a family of five, The Simpsons’ couch is so famous it’s almost a cast member.