The Colonial-style estate where the author wrote some of his most famous works. 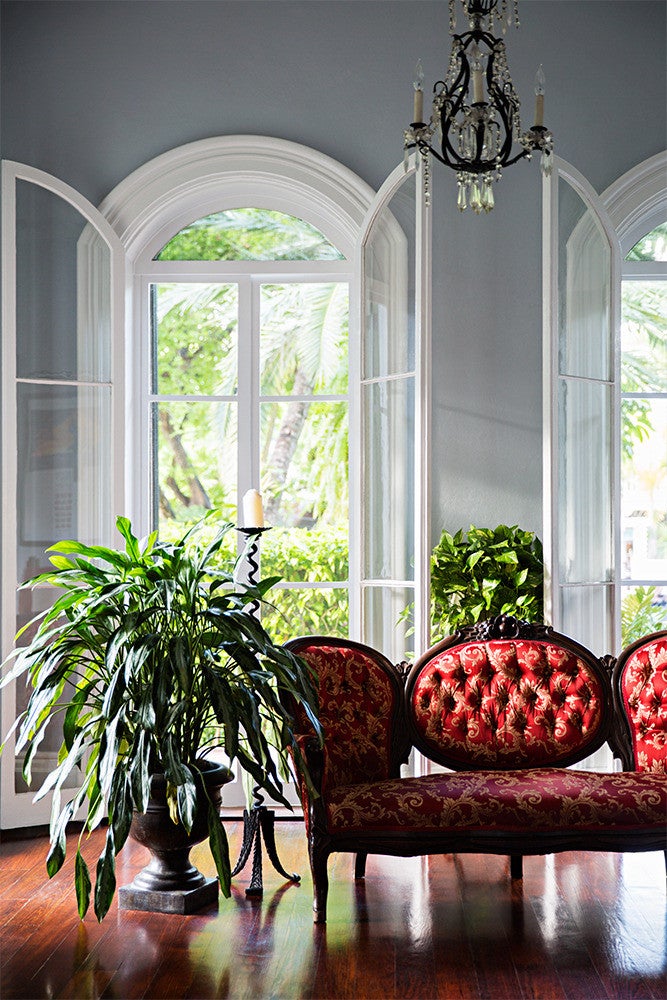 Although they’d vacationed in Key West, Florida, for years, it wasn’t until 1931 that Ernest Hemingway and his second wife, Pauline Pfeiffer, determined to put down roots on the island. Hemingway had grown smitten with the tropical city and its colorful locals. So, just before setting out to report on the early stirrings of the Spanish civil war, he purchased a Colonial–style estate on Whitehead Street for the (even then) bargain price of $8,000. Originally built in 1851 as the residence of a local shipping magnate, the coral-stone mansion was home to the family until the couple’s divorce in 1940, though Pfeiffer and their two sons, Patrick and Gregory, remained there until her death in 1951.

Hemingway’s writing studio, located on the second floor of the estate’s carriage house, where he wrote To Have and Have Not and For Whom the Bell Tolls.

Pfeiffer decorated the home with antiques discovered on the couple’s travels, including the living room’s settee and crystal chandeliers.

The master bedroom’s headboard was made from a gate salvaged from a centuries-old Spanish monastery.

The estate’s exterior walls were constructed with coral stones found on the property.

Infamous throughout Key West for his reckless drinking and wild brawling—especially at Sloppy Joe’s, a local watering hole—Hemingway proved an unorthodox figure, even by the island’s laissez-faire standards. At home, too, the writer’s quirks were thought eccentric. Suffering spells of paranoia, he installed secret compartments throughout the house for storing jewelry and other valuables. His affinity for six-toed felines was found equally notable. He had upwards of 60 cats living at the Whitehead Street estate, and he even constructed a catwalk connecting his study to the main house so that they might traverse the property with ease.

Today, the residence at 907 Whitehead Street, now the Ernest Hemingway Home & Museum, is a designated National Historic Landmark. Tours of the house and gardens are available year-round. For more information, call 305-294-1136 or visit hemingwayhome.com.