The DIY Runner in This L.A. Entryway Cost $700 Less Than the Store-Bought Option

Plus four more tricks to steal from the rental reno. 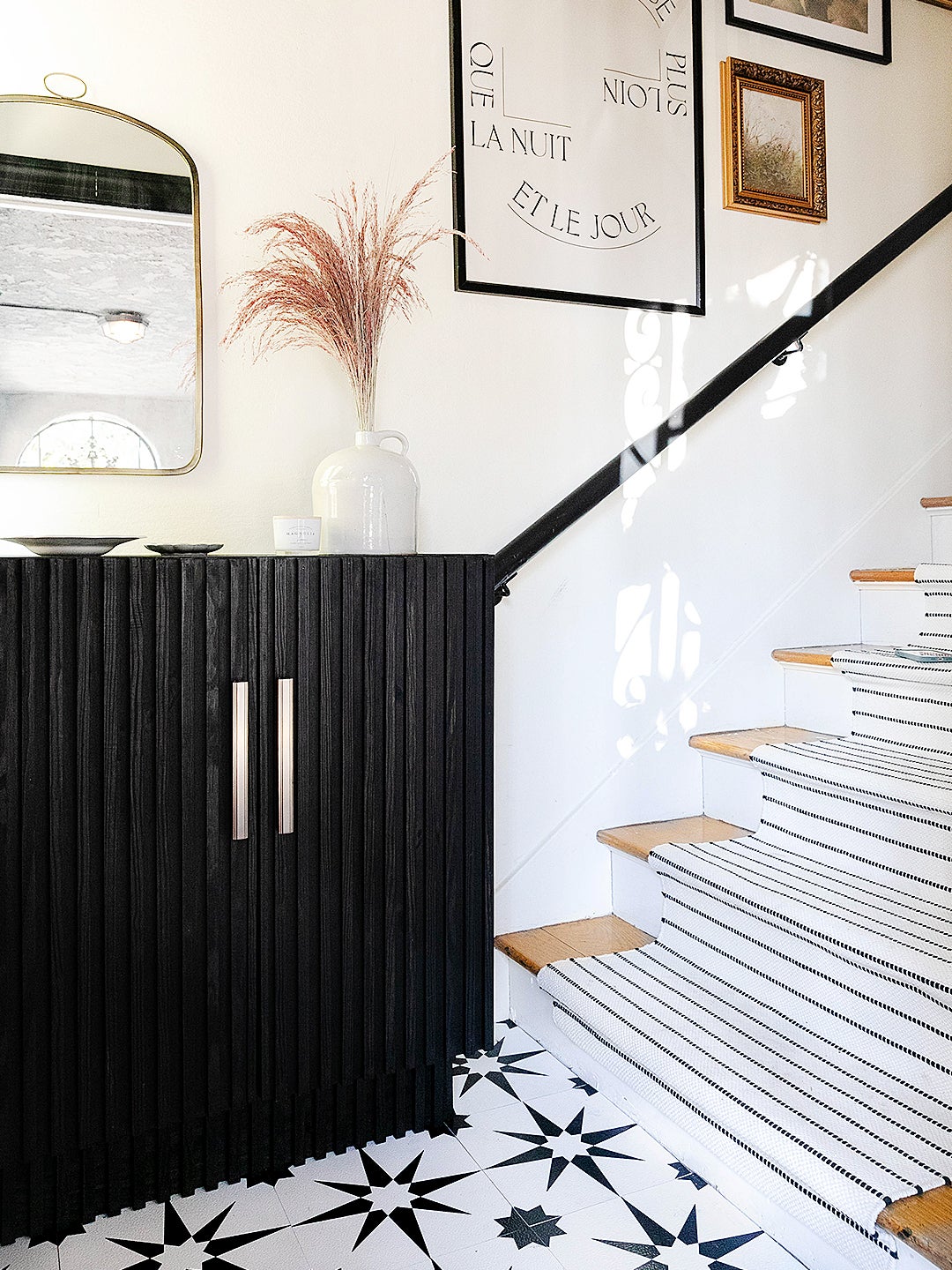 Before Lone Fox Home’s Drew Scott worked his DIY magic, the first thing you noticed upon entering his Los Angeles duplex was a steep, sterile staircase painted in shades of beige and white. A bit too bland for his taste, he took the entryway from boring to a fun first impression—in two days.

Given Scott lives in a rental, nothing from the teeny-tiny front room was removed—even the light fixture stayed in place (not for lack of trying; it was glued to the ceiling, he says)—but an IKEA dresser hack and other thrifty finds (our favorite: bronze frames from Amazon that look as if they were scored at an estate sale) liven up the space. Here’s how.

One of the first tools Scott reached for was a paintbrush and a leftover gallon of Tricorn Black from Valspar to create contrast between the door, railing, and window trim and the plain walls. Focusing on accents rather than tackling larger surface areas like the walls will also make repainting easier when it comes time to move out.

When Scott realized he couldn’t switch out the classic flush-mount ceiling light that seems to plague nearly every rental, he did the next best thing: apply some brass Rub ’n Buff for a facelift that took no more than five minutes. “With the fluting and the brass, it almost looks like a vintage Parisian light fixture,” he says.

Not All Peel-and-Stick Tiles Are Created Equal

“Whenever you rent a new space, there’s generally that one area that has the most random flooring, whether it’s the closet, kitchen, or pantry. I’ve always used peel-and-stick tiles,” says Scott. His go-to MacGyver method can be found all over the apartment—in the bathroom, kitchen, and, of course, entryway. He has tried nearly every removable flooring option out there, and the FloorPops brand remains his ride or die. (Where most have a consistency like wallpaper, the ⅛-inch thickness keeps the surface looking smooth instead of telegraphing every bump and grout line.) He picked a white and black sunburst pattern to brighten up the granite-esque floor in the small space. Bonus: One pack costs less than $20.

Staple Your Way to a Stair Runner

When Scott realized a runner would cost him nearly $900 (it is a long stairwell), he immediately started brainstorming a creative work-around. The winning solution: stapling seven IKEA Törslev rugs together. The whole purchase ran him around $200. After simply cutting off the hems of each rug—and making sure they were perfectly aligned—he took a staple gun to the step and joint of each riser. Since the runner was a “DIY on the fly,” Scott soon discovered flimsy staples were a tripping hazard. “I want to redo it for sure,” he notes. Next time he plans to use staples thicker than the half-inch ones he chose for the first go.

Dowel Up the Doors of an IKEA Dresser

With such a small gap between the stairwell and doorway, Scott wasn’t sure if he would be able to squeeze in a console table, let alone an entire IKEA furniture flip. As luck would have it, a recent DIY project that was originally being used as a home bar ended up being the perfect fit and now houses his vases and candles. He scooped up the Ivar cabinet for $49 in the Scandinavian retailer’s As Is section and gave it a major upgrade by stapling half-inch wood dowels ($4.50 per 8-foot section) onto the doors and sides, before sanding and painting the whole thing in a black wood finish. The final touch: shimmery champagne-colored pulls.

Go Long With Your Gallery Wall

In this space, a meandering gallery wall distracts from its compact size and entertains guests while walking up the stairs. “It’s also a conversation starter to incorporate things that you personally love,” says Scott. For him, that’s one-of-a-kind Etsy prints and other art pieces he’s collected over the years. All the frames he sourced are either thrifted or appear as if they are (but really they were steals on Amazon).“I’m somebody who loves changing things up,” he adds. “I can just pull a frame down, pop new artwork in there, and switch up the entire look.”