12 celebratory, lightened up dishes for indulging, but not TOO much. 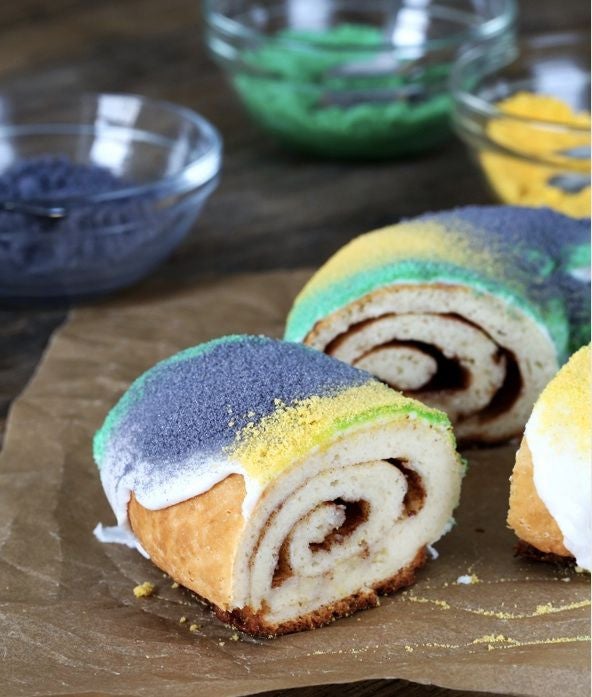 Beignets, those fritter-like pastries found in cafes all over the Big Easy, are typically fried and then served hot after being doused with powdered sugar. This version bakes the beignets instead for a more belly-friendly, but still delicious option.

Vegans could try using this recipe.

Italian immigrants to New Orleans created the muffuletta (or muffaletta), and this storied sandwich was quickly adopted as a N’Awlins original, with plenty of meat, cheese, and a signature olive salad, stuffed into a light, round bread. This veggie  version goes big on flavor.

A Creole dish with Spanish and French influence, jambalaya is a flavorful mix of rice, vegetables, and usually some type of meat or fish. This vegan option brings the heat; feel free to add some spiced veggie sausages or veggie chicken for an even heartier meal.

A New Orleans bartender named Henry Ramos created the aptly named Ramos Gin Fizz over a hundred years ago, but this frothy, creamy cocktail still can be found at bars all around Bourbon Street and beyond. A rosemary and gin fizz strays a bit  from the original, yet still packs a flavorful and refreshing punch for a drink that might go down a little too easy.

This festively colored cake is a Mardi Gras mainstay. A gluten-free version makes it possible for celiacs and gluten-sensitive people to celebrate the holiday as well; just sub in a store-bought gluten-free bread flour if you don’t want to make the recipe’s flour blend. We’ll let you in on a secret: king cake makes an awesome late night snack, post-party breakfast, or a teatime treat.

Po’ boys, or poor boys, are the New Orleans take on a submarine sandwich, using a baguette-like bread in lieu of a softer roll. The fillings typically include fried seafood or a hearty serving of meat, but why bother when there are delicious options like a  sweet potato po’ boy or a cornmeal crusted tofu po’ boy?

chicory coffee popsicles Chicory root began as an addition to coffee in New Orleans about 200 years ago out of necessity due to war and trade blockades. Even back then people knew that being deprived of coffee was NOT an option. Despite coffee’s widespread availability now, N’Awlins denizens have stayed loyal to chicory and many still imbibe a mix of coffee and chicory and milk for their morning café au lait. All of this history means you should make these chicory coffee popsicles and eat them anytime of the day or night!

Creole dishes often feature the beloved trio of bell pepper, onion, and tomato as well as an array of spices, and this creole shrimp marries these flavors beautifully. Serve with some white rice for a bright, flavorful, and fresh meal.

A lighter twist on the traditional Hurricane, this simple version uses orange and cranberry juice and considerably less rum than the original. The upsides of making this refreshing version at home: the not-cloyingly-sweet taste and the greatly decreased likelihood that you will end up doing something you regret just to grab some plastic beads.

dirty rice with collards and leeks

Bumped up in flavor (isn’t everything in New Orleans?), dirty rice gets its name and appearance from being cooked with small bits of veggies, meats like chicken liver or gizzards, and plenty of spices. This plant-based dirty rice is gorgeously green and healthy, combining plenty of chopped collards and leeks, with some chopped pumpkin seeds for added crunch.

Delicious and decadent bananas foster is a beloved and showstopping dessert prepared tableside at tony Big Easy restaurants:  bananas are cooked with butter and brown sugar and then rum is added and set on fire. Typically served with ice  cream, we chose a version that goes well with a filling and nutritious chia seed pudding.  The beauty of the topping is that it can go on just about everything from fresh toast to frosty treats as well.