'The Half of It' star shows us her L.A. home base. 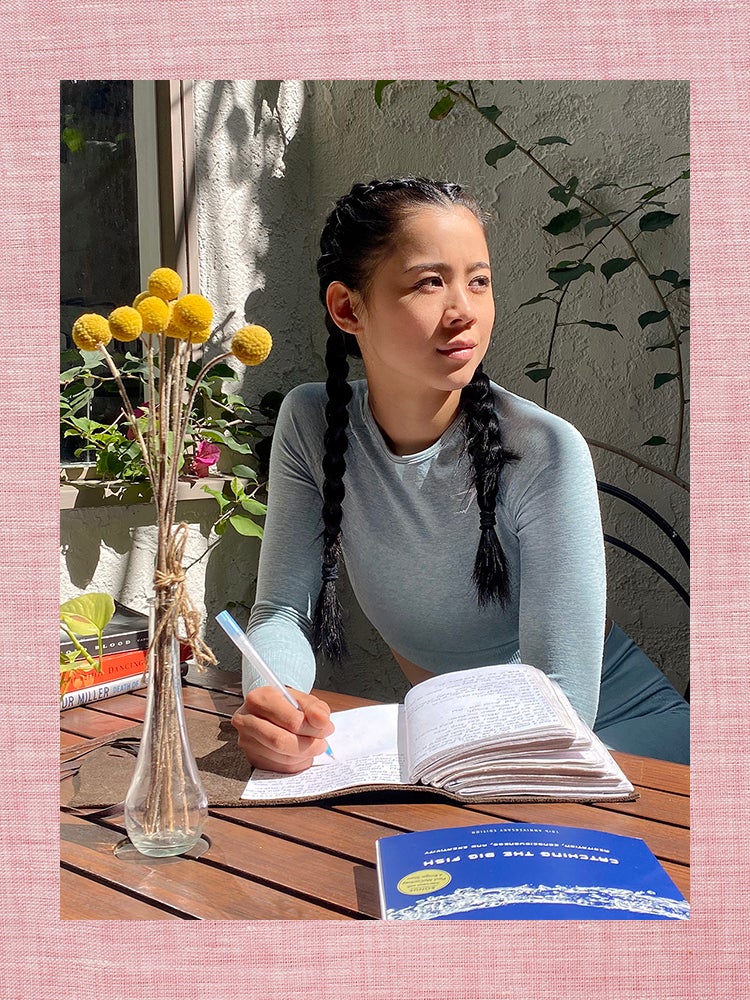 Leah Lewis is wearing jeans in quarantine, but it’s not because she has something to prove — she’s just taking work home with her. On a Zoom call from Los Angeles, the 23-year-old actress reveals that she’s wearing the same jeans she wore in character as Ellie Chu in The Half Of It (one of Netflix’s top 10 most popular new rom-coms that you can watch right now.)

In the film, Lewis plays a soft-spoken and reserved high schooler, but in real life, she’s exuberant and confident, and her laugh echoes through the guest house where she’s been quarantining for the past two months. It’s just a few steps away from her boyfriend Payson’s house that he shares with roommates; the separation allows them to have their own spaces to be creative. Ultimately, Lewis plans to find her own place in L.A., but the guest house has been a cozy spot to land after spending time shooting The CW’s Nancy Drew in Vancouver.

She doesn’t have all her belongings with her, but she’s settled in with a few key routines and objects. Or, as Lewis more romantically explains: “I feel like you can kind of make a home out of anywhere by just remembering the things that really make you feel you. Doing something that feels ritualistic and good in every single environment.”

Below, Lewis tells Domino how she makes herself at home.

Zen space: There’s a little nook on my patio in front of this fountain that I spend a lot of time in, whether it’s writing or eating or just sitting. Being outside has always been really important for me, but especially during this time because it helps me connect with everything around me and feel like everything is so much bigger than what I’m going through.

Do the write thing: I’ve journaled every single day for most of my life. Sometimes just letting it go in writing and getting things down on paper can help me see things for what they are, and it brings a lot of clarity to my life. It’s something that I kind of do as a hobby but also as a personal meditation thing. Through my journal, I’ve discovered that in a couple of days it will be two months since I’ve been here. So actually, thank you journal for keeping me updated because I didn’t realize that. I actually thought I’ve been here for like, four months.

Snack attack: I’m snacking like crazy. I want snacks all the time! I’ve had cravings for dried squid, which I used to really love getting from the Asian mart when I was younger. And I want seaweed. I don’t know why. I’m craving the weirdest saltiest things. I also loooove SmartSweets. They’re made of tapioca and plant-based fiber and have three grams of sugar. It doesn’t taste like candy but it has its own specific flavor that I really like. I love Sweet Chews, their version of Starburst. They have kind of an earthy taste to them that isn’t for everyone; it just depends on how much “earth” you can handle.

My other half: Alexxis [Lemire, co-star in The Half Of It] and I are so close. Because of this movie we became like sisters, and I’m so grateful for that. We talk almost every day. We actually are voice memo-ers and we are biiiig laughers. We’re always like “bahahahaha!” She makes a lot of Office jokes that just crack me up.

Oui, chef: My boyfriend and I cook for each other now, and it’s fun to see what we can just whip up with what we have on hand, like a challenge. The other day I made this incredible shrimp pasta. I just created it with my favorite ingredients, knowing if I loved them separately they’d probably taste really good together. Shrimp, tomato, spinach, and Parmesan on top of pasta. It was the best thing in the whole world.

Scent story: I have a certain candle that I take with me everywhere. It’s always a brown sugar-vanilla scent and doesn’t matter the type or brand of candle, but it’s usually a light soy and nothing too heavy. I also love the Voluspa Huckleberry Santiago candle. My boyfriend bought one for me for our second anniversary, and it makes me feel so cozy.

Rom-com comfort: The Lizzie McGuire Movie is my favorite rom-com. I know that totally dates me as being a child. When we were kids, we all wanted this love experience, we all thought they were going to go to Rome and trade places with the superstar. And the music was so good! Lizzie McGuire was just such a relatable character for me.

Music mood: I’m always in such a good mood every time I listen to John Mayer’s Live in Los Angeles album. When he does “Stop This Train,” that always makes me think about life. I have a little cry, but I’m like, “Oh, I feel so at home” after listening, because it just kind of grounds things for me.

Sweet goodnights: I usually go to sleep with Laneige strawberry lip balm. I put that on probably every night, and I don’t even need it anymore.. Then, sometimes I’ll be like, “Alexa, play rain sleep sound.” But that’s only if I’m being extra. I’ve never been bothered by the rain; I love when it rains. Although in Vancouver, where we filmed Nancy Drew, it was cold and rainy and I’m not a fan of that. I like warm rain. So as long as I know Alexa is playing warm rain songs, but not cold rain songs, I’m good.