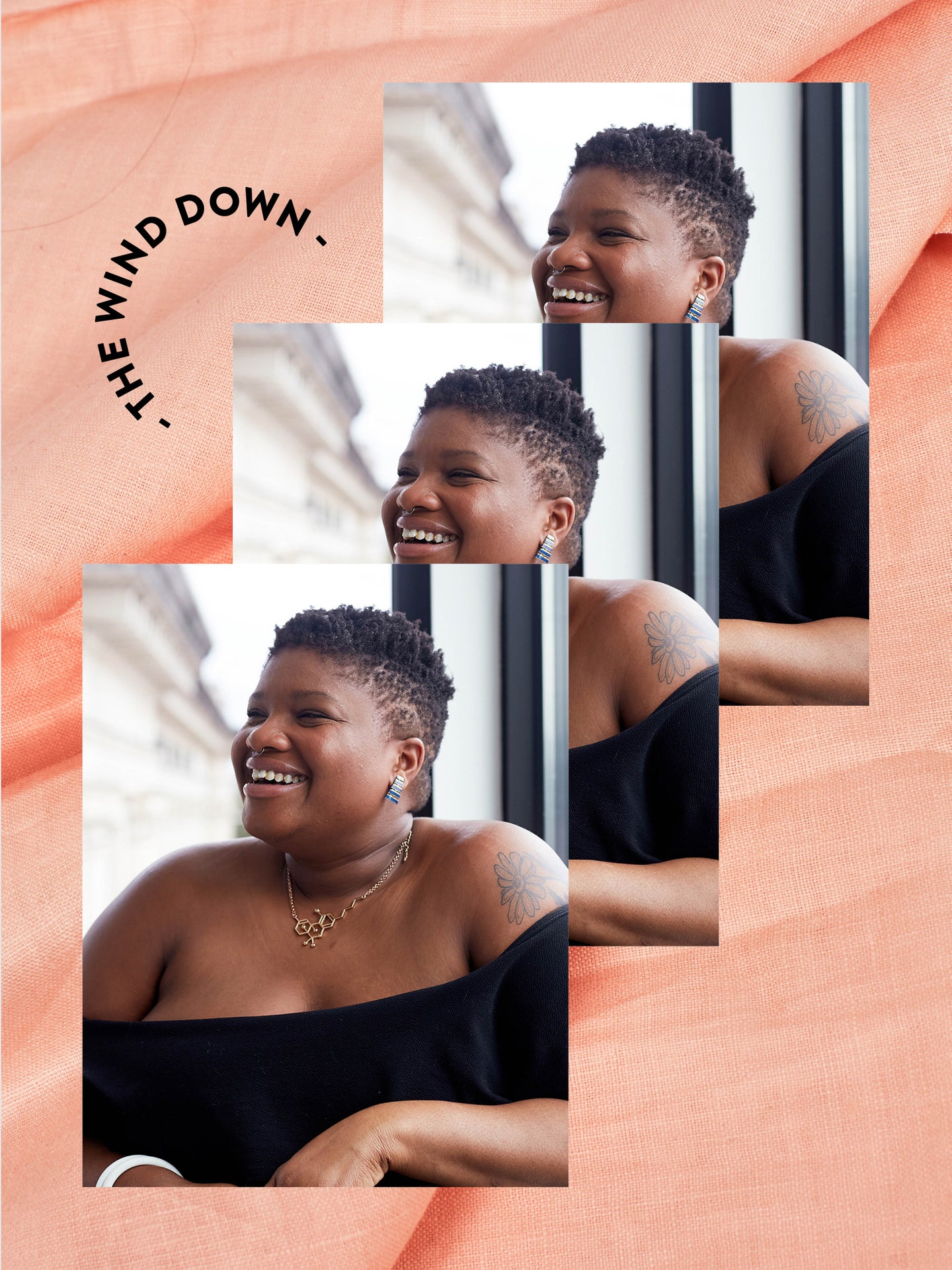 Jessamyn Stanley—the author of Every Body Yoga, founder of The UnderBelly yoga, and host of the Dear Jessamyn podcast—has constantly been on the road for the past few years. So when she started quarantining in March, she relished the opportunity to slow down. “I had been traveling at a rate that felt really emotionally unsustainable,” she says. “I needed to spend time and be home to ground myself.”

She started practicing more concrete routines in her Durham, North Carolina, home, which she shares with her three cats; her Chihuahua, Baby Shark; her partner; and, more recently, her other partner, who moved in earlier in the pandemic: “At first it was basically like we were in this queer, poly Brady Bunch situation, all getting to know one another,” she says. “I’ve also changed the way I engage with my plants, and I spend more time with our animals—I’m really engaging with the other living beings in my home.”

Now that everyone in the house has found a new rhythm, Stanley is making sure to take time for herself. She begins each day with yoga, often before the sun rises, and she’s mastered the art of the perfect bubble bath at night—small rituals that help her to feel more grounded in herself and in her space. “I think more than anything, it’s been a time of deep seed planting,” she says. Here, she shares her full wellness routine.

Early start: I get up around 5 or 6 a.m., but if I accidentally wake up earlier, I’ll just stay up. I like to do yoga in the morning, but I was never quite so specific about it before quarantine. I’m a Bahaʼi, and I practice fasting in March. So I would wake up early in the day and do yoga before the sun came up, then eat when the sun went down. Since then, I’ve tried to maintain that early practice. Starting with that kind of submission in the morning has been really helpful for me—as things get more stressful in the day, I can tap into that feeling and don’t try to fight my emotions as much. Sometimes before my yoga practice, I like to clean out my brain a little by journaling. I keep journals everywhere—if there’s a thought, I want to get it down there.

Sound on: In the morning I really like the Daily Wellness mix on Spotify. Basically, it’s a mix of music and podcasts to start your day. When I first heard about it, I was kind of like, I don’t know about this, but now if I don’t listen to it with my partner in the morning, I’ll listen while taking a morning shower. It’s just a nice way to get into the day and feel good. I also enjoy listening to books when I’m in the shower. Being in the water is kind of like meditating, so I let my mind go on autopilot and listen to a book that’s inspiring me. I’ve listened to The Artist’s Way and The Four Agreements I don’t know how many times.

Skin saviors: I love anything CBD infused for my face. I’ve been using Curaleaf hemp oil for my skin, as well as that brand’s eye cream and face cream. I really believe that our bodies are made better by the cannabinoids found in cannabis, and I do think THC has a role for many of us—for me it’s very important—but CBD also offers so much. I’ve used Curaleaf oil for a long time, and I really think it enhances the glow from inside of me more than anything else.

Wash off: I’ve more recently discovered the joys of an evening shower. I like to put a candle in the window and shower with no lights on. I live for a bath, too. I think if everybody had a big bathtub at their house, they could just get in when they’re tripping and we would live in a different world. I like a lot of bubbles—I usually go for Dr. Teal’s, because I’m a Target girl and the store sells it. Depending on what I have available, I might add dry flowers or dry rosemary, which a friend sent me the other day. Once the water has run, I put a good amount of Epsom salts in—I don’t do that until later because I think they can reduce the amount of bubbles if they’re added earlier. I like to mask when I’m in the tub, too—I’ll do a bentonite clay and charcoal one, and I always have a good stash of sheet masks, too. Sometimes I deep condition my hair as well.

Simple snack: When the pandemic first happened, people were acting buck wild at the grocery store. So I felt like I had to act buck wild at the grocery store. That meant being in the crackers aisle in a way I had never been before, being like, “Triscuits! Ritz crackers!” We’ve purchased Triscuits multiple times in the past few months. I’ve been trying unsuccessfully for years to stop eating cheese because it doesn’t like me, but I really enjoy a slice of meat or sharp cheese and a Triscuit. Delicious.

Stream team: I watch a lot of historical documentaries if I’m by myself—a lot focus on the 1950s through the 1980s, but I’m really interested in the time between the First and Second World Wars, too. But when I’m eating lunch, I’m rewatching Gossip Girl for, like, the 10th time. If I’m with my partner, we watch one of our favorite shows—right now that’s Watchmen on HBO.

Best bed: I generally have the bed set with six pillows and take two off before I go to bed. Depending on if I’m sleeping with my partner, I might take another one off. I have a lightweight quilt and a throw on the bed, as well. I have my bed set in the middle of the room so you can walk about it. It feels like I’m just able to curl up in my little crab shell.

Bedside essentials: I have a dresser behind my bed, the top of which I use as a nightstand. I don’t like to have a lot of stuff up there, because then it can feel chaotic. But I have a couple candles and a jar of water. I also have a basket where I keep my sleep things—vibrators, sleep caps, and this amazing cannabis chocolate by 1906 New Highs called Midnight. On top of my headboard I also have a little gold bowl that I put my phone in. I have to literally get out of bed to go get it. I use an alarm clock so I don’t have to use my phone for that—push notifications are such a buzzkill when they’re the first thing I see in the morning, even if it’s a CNN notification.

Night reset:  When I go into my bedroom, it is just for sleeping. I’m a Cancer and I’m overly sensitive, so I like having that space where I can just breathe and think and transition away from that frenetic work energy. Sometimes even before the sun is fully down, I shut my curtains in my bedroom and I turn on diffusers and light candles—I hate having the lights on in my room. I’ve been enjoying Sage Wellness’s Unwind and Bia Candle Co.’s jasmine magnolia candle.