It’s an essential part of their nighttime routine. 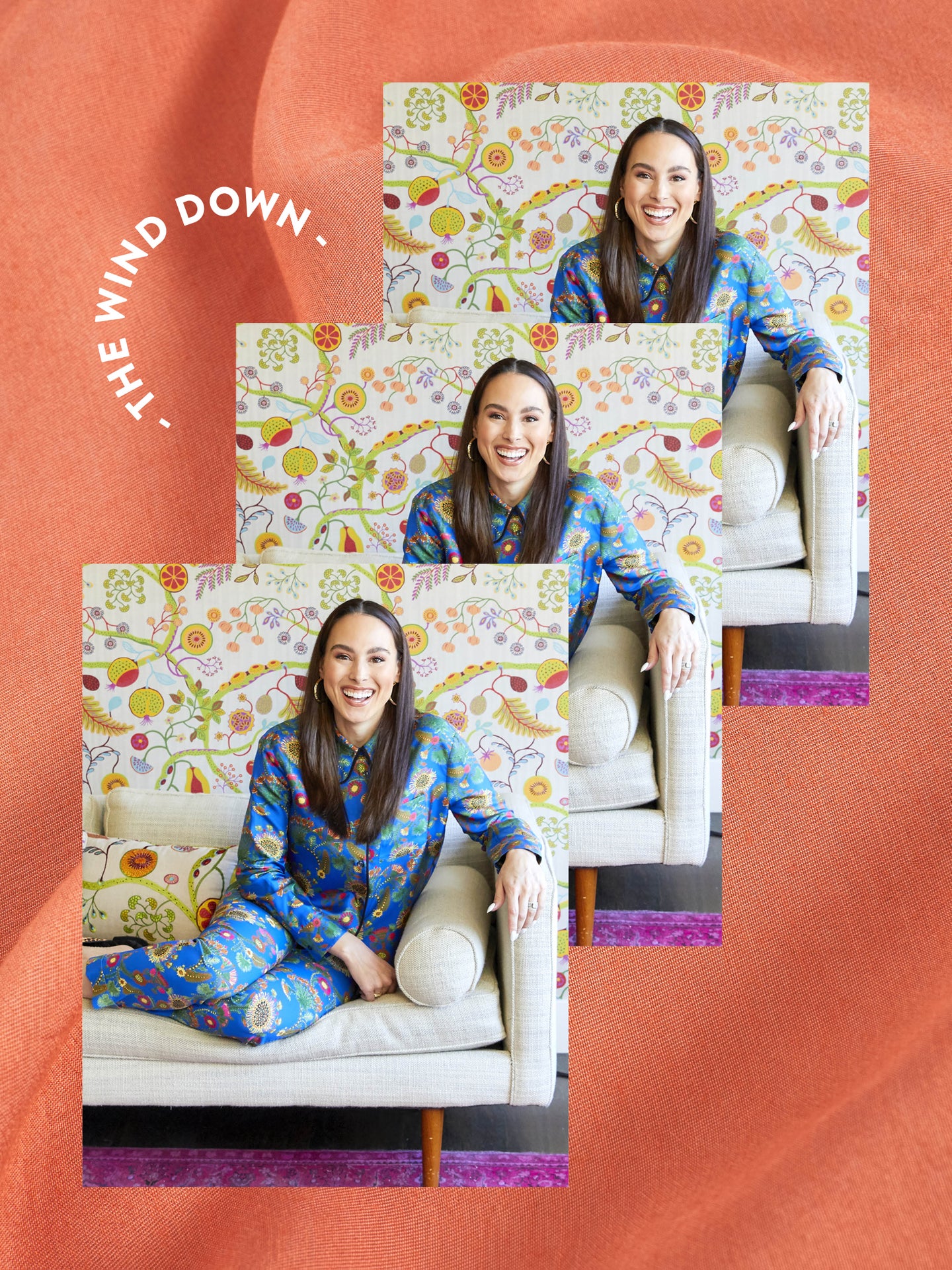 We spend a third of our lives asleep—that means our bedroom is the most lived-in space in our homes. It’s the room where we start and end our days, and that’s why the rituals that happen there are extra important. In The Wind Down, we’ll be exploring the nighttime routines of people we admire and taking their advice to make the moments just before bed feel our best.

“I’m kind of anti-routine,” says Meena Harris. “I go through extremes—I’m either binge-watching something and cooking a chicken at midnight or I’m jamming through a ton of emails.” The founder of social justice–driven organization Phenomenal and mom of two daughters, ages 2 and 4—keeps a busy schedule. Since she started quarantining in her San Francisco home with her family, she’s found a few new coping strategies, like cooking and finally getting into Netflix, which she turns to whenever she needs a break.

One constant in her household, though, is story time—which is especially fitting, as Harris just released her own children’s book. Maya and Kamala’s Big Idea is based on her mother and her aunt, Maya and Kamala Harris, and how, as children, they worked to turn the unused courtyard in their apartment building into a playground for everyone. Its message of resilience is one that the author hopes can inspire her daughters and countless others. Here, she shares all the ways she’s been filling her evenings with family time and some much-needed self-care.

Dinnertime: Cooking felt like the sort of thing I didn’t have time to commit to before. I don’t do it daily, but when I can unplug for an hour and make something, that helps—I literally made both a roasted chicken and chili the other night at 10:30, so sometimes my partner and I end up eating late. Food was such a big part of my life growing up, but it always felt like my grandma, in particular, could whip up anything really quickly. The more I cook, the more I feel like it’s doable.

Mane event: We’re not able to wash my older daughter’s hair every night—it’s a huge production. We recently introduced a bonnet, which helps protect it, and we also use silk pillowcases. There’s an amazing book by Nancy Redd called Bedtime Bonnet—it was super-cool to read that book to her and then literally be like, “Okay, now here’s your bedtime bonnet.” That kind of book didn’t exist when I was growing up, and her hair texture is different than mine, so teaching her about routine and hair care through a book was amazing. She specifically refers to her bonnet by the title of the book.

Sweat it out: The only time I don’t touch my phone is when I’m on my Peloton bike. I got one to make working out easier—going to classes felt like such a big production, and I would always put so much pressure on myself because I’m so competitive. Like: Unless you can do 45 minutes and beat your PR, that’s not enough. I realized I needed to get out of that mind-set—it’s good for both your mental and physical health. Now I just try to bang out 30 minutes whenever I can find the time.

Required listening: It’s been hard to sit still and focus lately, so I finally listened to Michelle Obama’s Becoming. It was the first time I listened to an audiobook from start to finish. But now I feel like I’ve spoiled myself. I have been listening to a lot of podcasts, but it can be a bit much on top of the news—I usually listen to NPR. My favorite of all time is How I Built This, which is about entrepreneurs building businesses. That’s in regular rotation.

Bedtime stories: Almost all of our structure and routine has gone out the window, but one thing we’ve been able to stick to is reading. One of the fun things about having a family member who ran for president is that I now have a 4-year-old who wants to be president. So Sofia Valdez, Future Prez is a big one. We read a lot of classics, like Goodnight Moon and Where the Wild Things Are, but also new releases that focus more on diversity, like The Proudest Blue by Ibtihaj Muhammad. Finding new stories where we can introduce that to them is really exciting. I just read my own book to my kids for the first time, which was really special.

Medicine cabinet: I’ve been doing a much better job with my vitamins—my aunt sent me a whole list of things to take. Vitamin D has been a big one, because I haven’t been going outside. I take a women’s daily supplement, vitamin B3, vitamin C, and a probiotic. I started getting so much better with vitamins when I was traveling, and I would also wear a mask when I went on planes—all my friends who used to tease me about that are now like, “Oh, you’re ahead of the curve.”

Netflix and chill: I used to never really watch TV at all. But I binge-watched Ozark—that was so good—and Never Have I Ever is high on my list. We also watched The Last Dance, which felt so old school to me—it was like our Sunday night show.

Stereo love: I forgot how therapeutic it is for me to put on music and turn it up really loud. That’s something I had to change as a parent—I’m not trying to blow my kids’ eardrums out as I’m listening to Megan Thee Stallion. It calms me and makes me feel happy to jam to something for a few tracks—that used to be such a habit of mine when I was living by myself in Washington, D.C., and it’s something that I’m really trying to remind myself of. It’s also nice to introduce my daughter to things that aren’t kiddie songs but are still appropriate, like Prince, and teaching them history that way. That’s something I’m really looking forward to getting into more as they get older.

Skin saviors: My number-one routine must is skin care. Since I was a kid, my grandmother always taught me to take care of my skin and that there are ways to do that that don’t necessarily involve expensive products. She was a big proponent of Cetaphil. Now my routine has gotten a little more elaborate. I apply toner, then SK-II Facial Treatment Essence, followed by SK-II Power Cream. I also drink a ton of water—I put a big bottle on my bathroom sink, and when I wake up in the morning, I try to drink as much as I can.

Extra z’s: I used to take melatonin when I was in corporate law. I have not been having as much trouble sleeping lately because I’ve been pretty exhausted. I take CBD oil by Feals now and then. Wine is basically my go-to—just sitting and watching Netflix with a glass of wine is awesome.

Perfect pj’s: I sleep in a Phenomenal Woman T-shirt. It’s soft and comfortable, so it’s great for working from home. Since the pandemic, I’ve also been into housedresses. I used to wear leggings a lot, but more and more, they’ve started to feel constrictive. I like to put on something that can easily transition from sleep to wearing around the house.

Extra puff: I have about six huge pillows—they’re not decorative. I didn’t used to need them, but during pregnancy, I used a body pillow to prop myself up. The ones I use now aren’t body pillows, but they’re pretty big.

Lights out whenever, depending on the day.