Stone Fireplace, Begone—This Designer Nixed the Feature in Search of a View

When Lake Superior is your backyard, you make it the focal point. 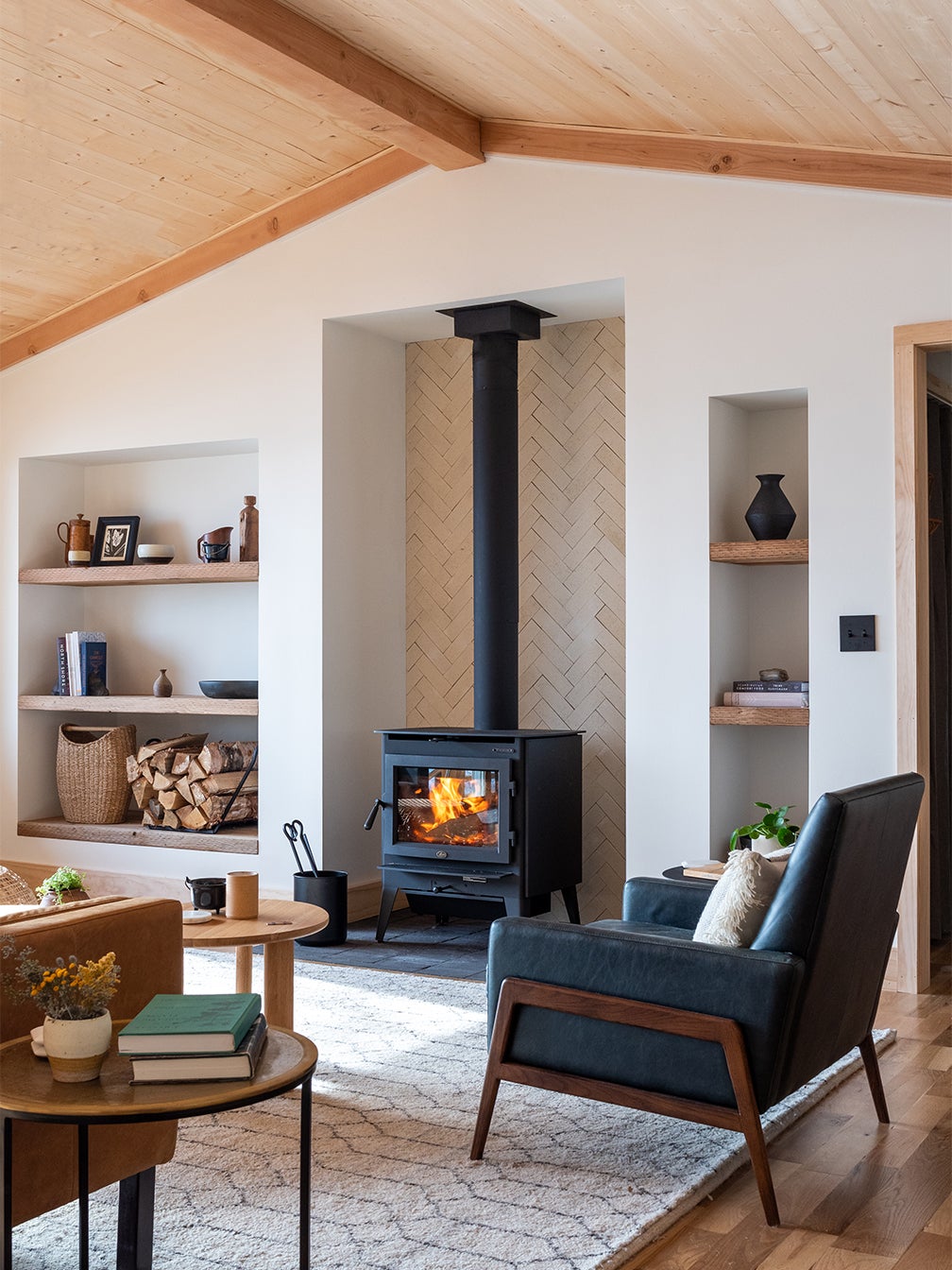 The first thing Julie Arnold noticed when she walked into Sweetwater Cottage in Lutsen, Minnesota, wasn’t the sweeping views of Lake Superior or the boreal forest unfolding outside the kitchen window. She saw only an old, mismatched washer-dryer set from the ’70s; wood-paneled kitchen cabinets; and a plastic-looking, faux timber parquet ceiling. Not quite the first impression you’d want for the potential vacationers that her clients hoped to have one day.

“I immediately knew that we needed to shift some things around and open up the sights of the crushing, rolling waves and the beautiful native wildflowers,” says the designer (a massive stone fireplace currently stood in the way). Inspired by the area’s rich Nordic heritage—the nearby Lutsen Resort was established in 1885 by Swedish settlers—Arnold set on transforming the house into a calming Scandinavian getaway with ample gathering spaces and access to the outdoors. Here’s how she did it.

The fireplace that blocked the sight line from the entrance hall wasn’t just your average chimney; it housed a double-oven and microwave (on the kitchen side) and a row of built-in shelves (on the living room side). It was also damaged beyond repair; removing it made the most sense.

In its place, Arnold recessed a much more slender wood-burning stove into a niche covered in herringbone Clé tile on the back wall. “Now we have a great big kitchen island that looks out onto the lake,” she says. 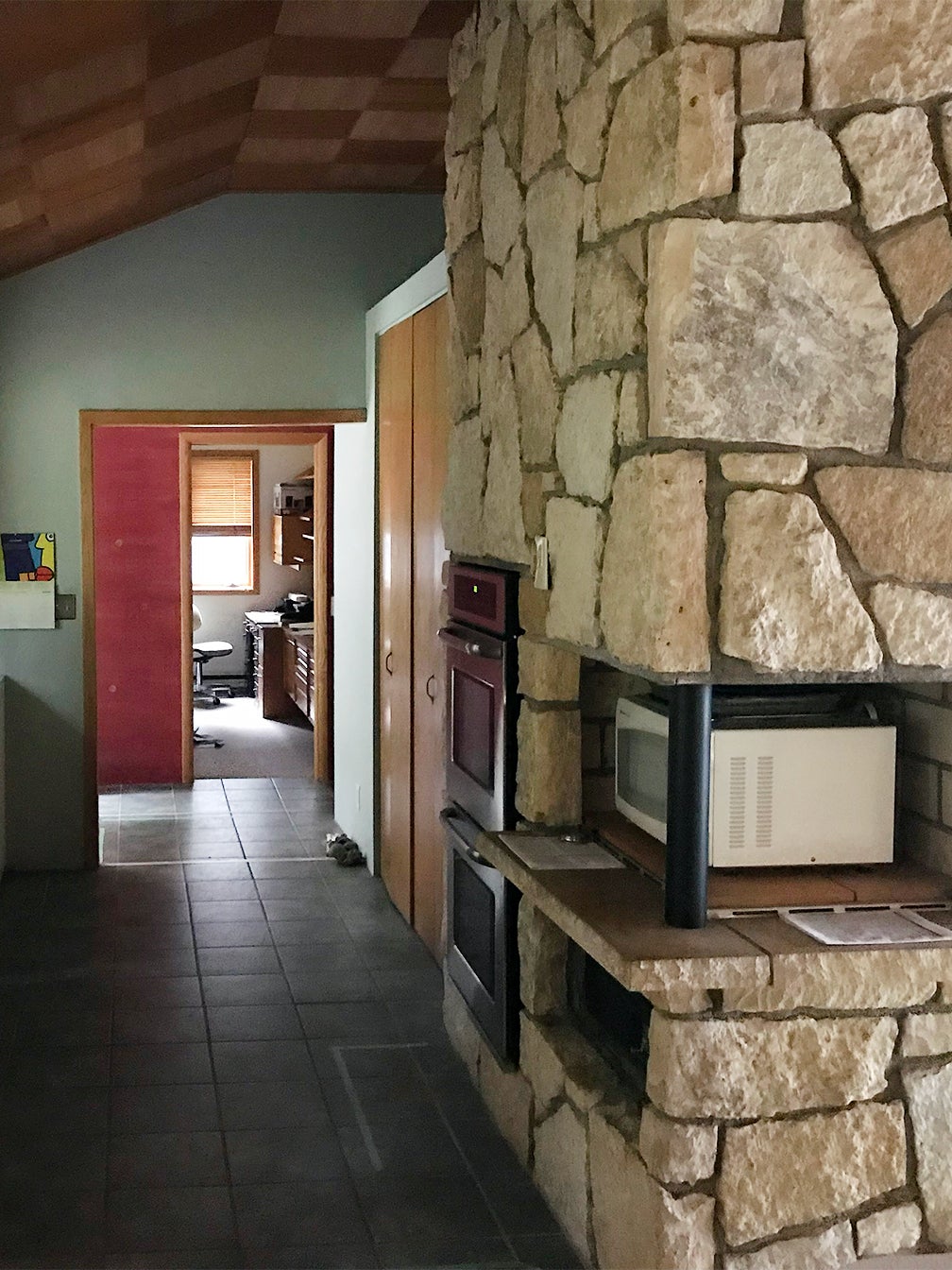 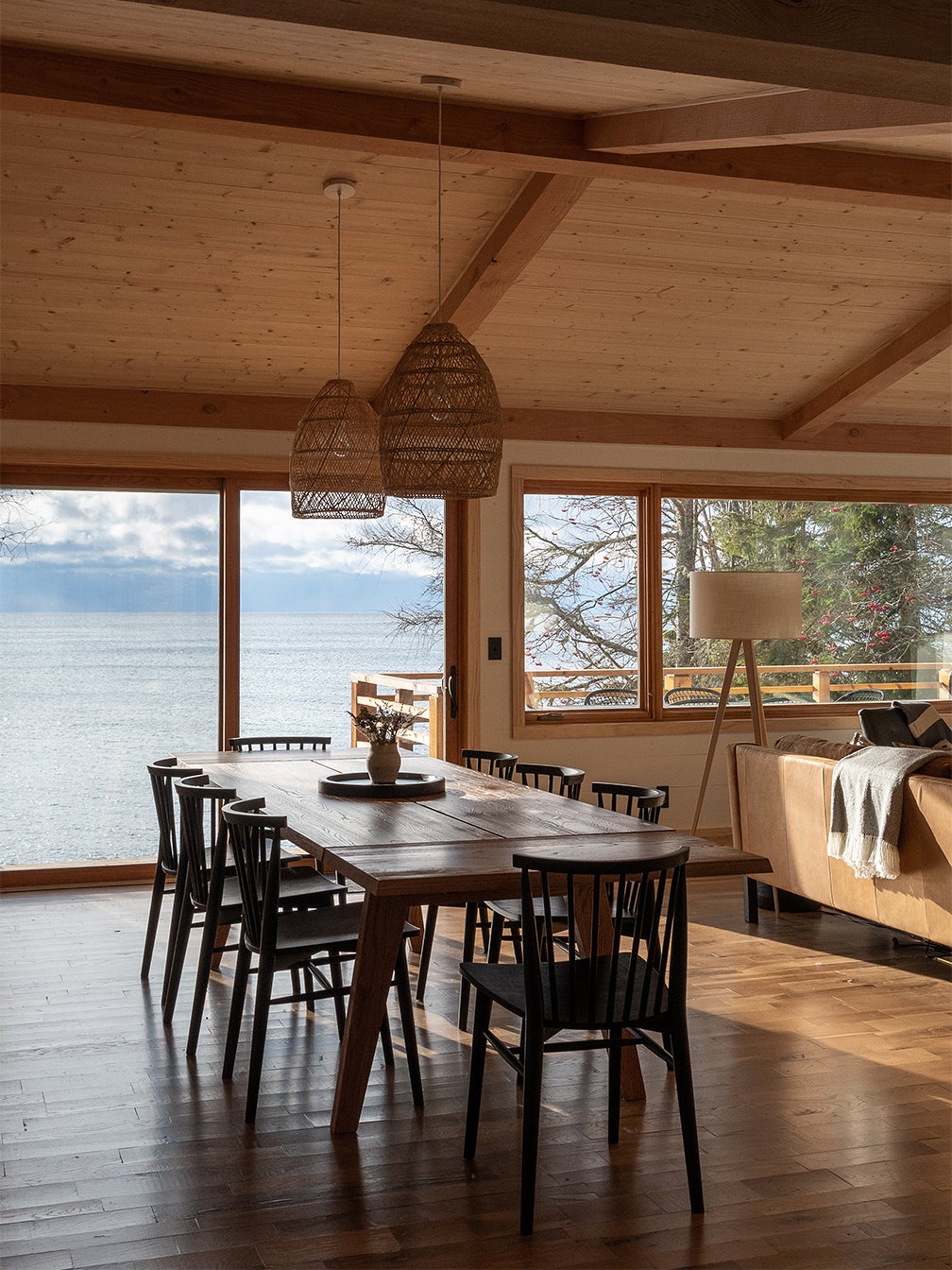 Rather than opening up the entire wall facing the lake, which would have cost a fortune, Arnold simply reframed the existing exterior sliding doors and windows in unfinished pine and swapped them around, creating a better flow in the dining room and a cozier living area. “You can just open the doors and walk out to eat outside,” she says. A new, wider stairway leads from the deck down to the water. 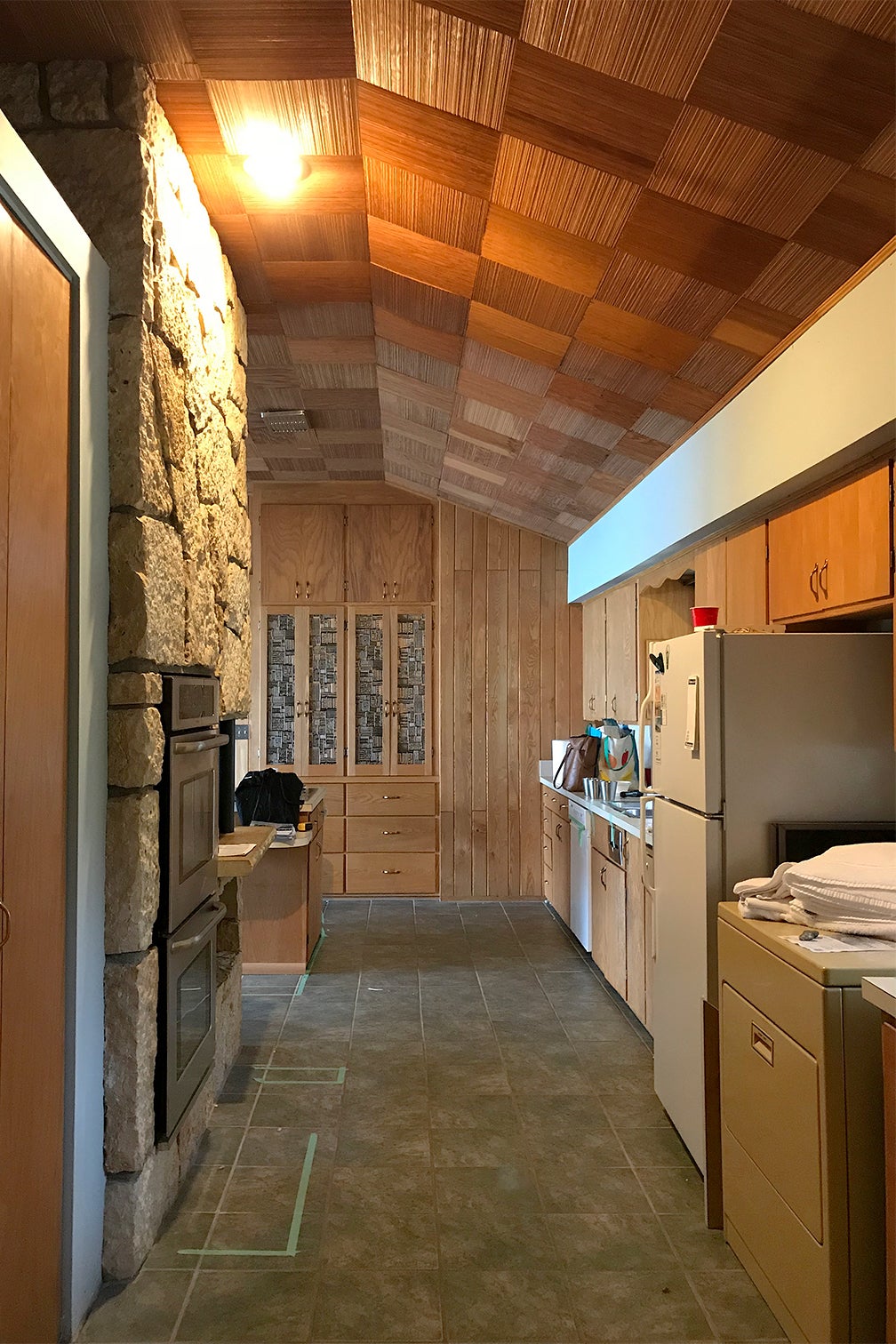 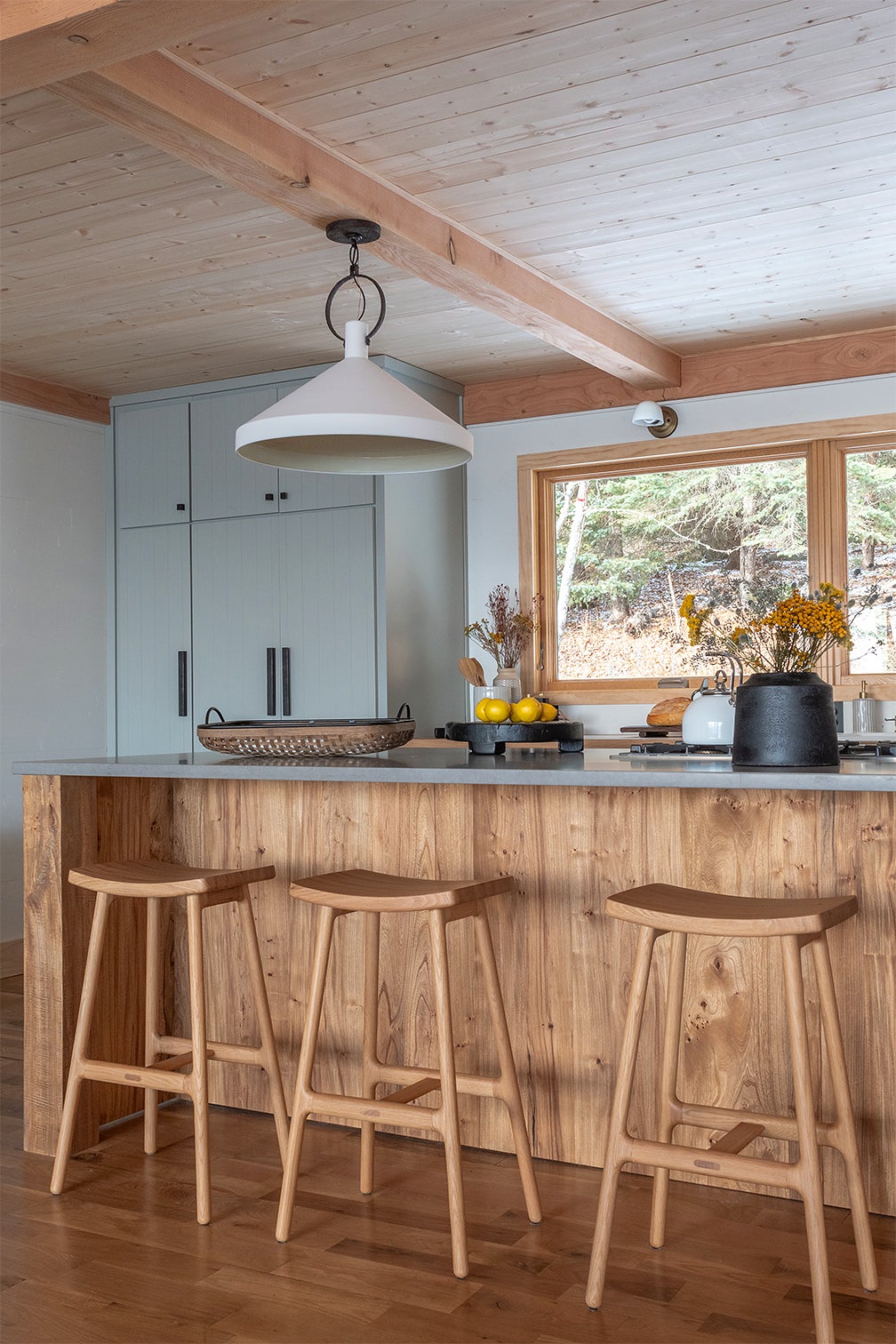 The kitchen, which is on full display from the living space, was another puzzle to tackle. Arnold’s first move was to switch out the two tiny existing windows for a large central one above the sink. She initially wanted shelves flanking it instead of just upper cabinets, but when she began framing out the refrigerator to the left, she quickly realized it would look better if she mirrored the built-ins and created a pantry on the other end.

No matter—the island became the spot for displaying the couple’s cooking supplies (and lodging the oven); the designer chose all open storage to make it easier for guests to locate what they need. 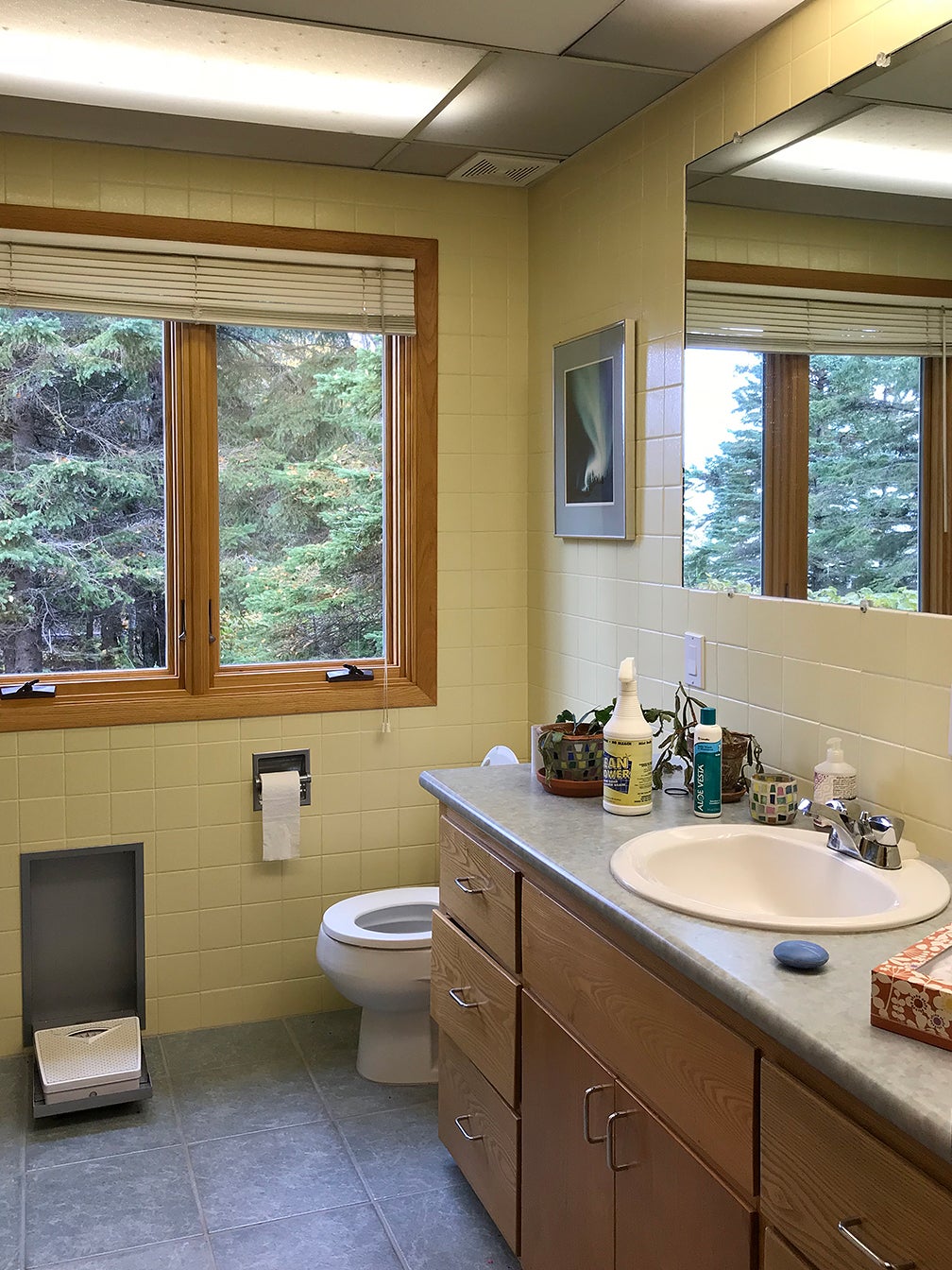 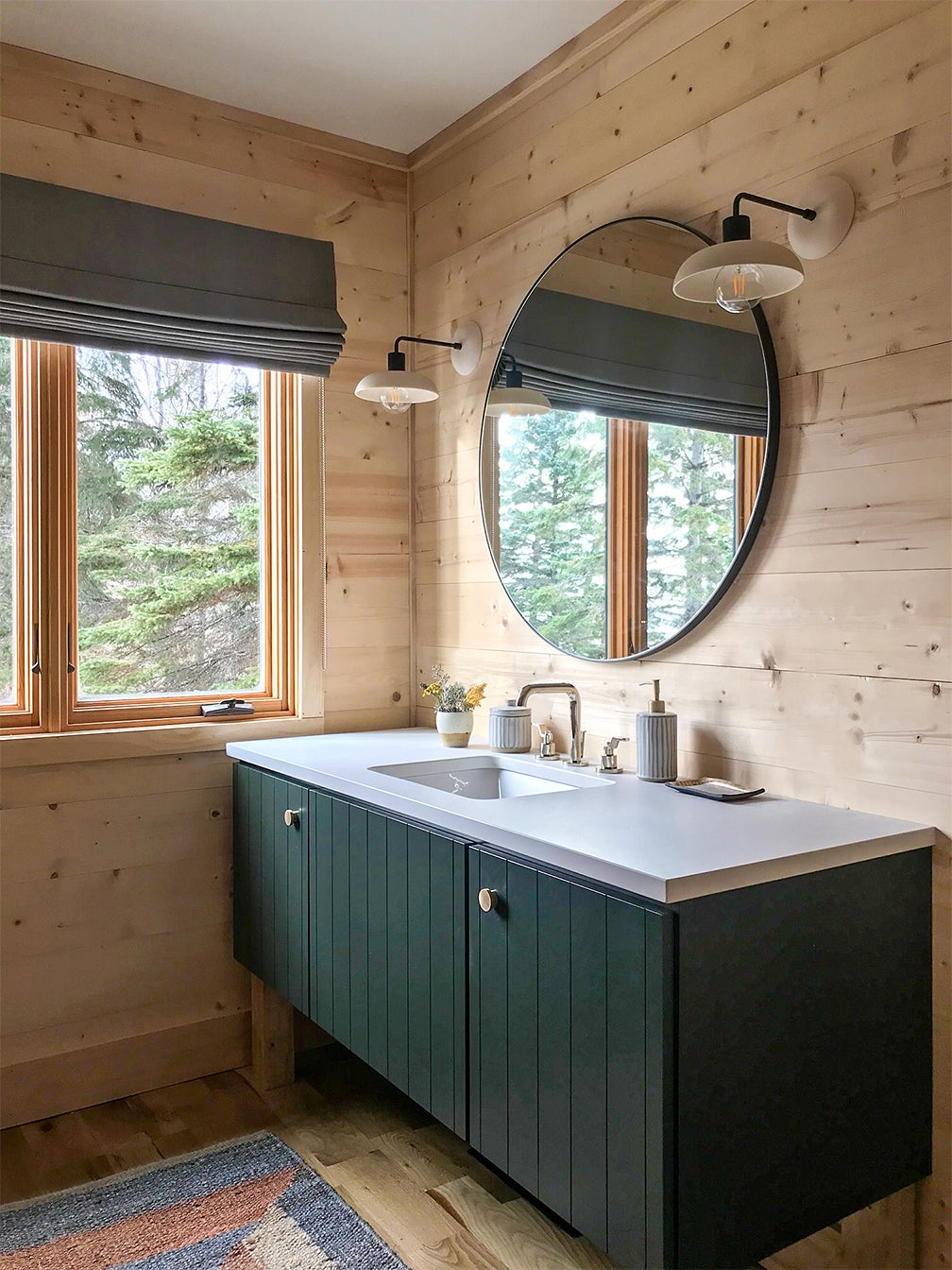 Because Arnold had pulled together a subdued palette like the one in the natural world, she knew texture would be essential to keeping things interesting. Out went the musty carpeting and mismatched tile; in came cohesive reclaimed oak floors.

The dated parquet ceiling also got the boot for pine, which can be found throughout the home: as shiplap in the bathrooms, stained paneling in some guest rooms, and painted beadboard in the others. “It has a few imperfections, so it feels like it’s always been there,” says Arnold. Just like the house itself.