Just one of many wallet-friendly upgrades in this lakeside cabin. 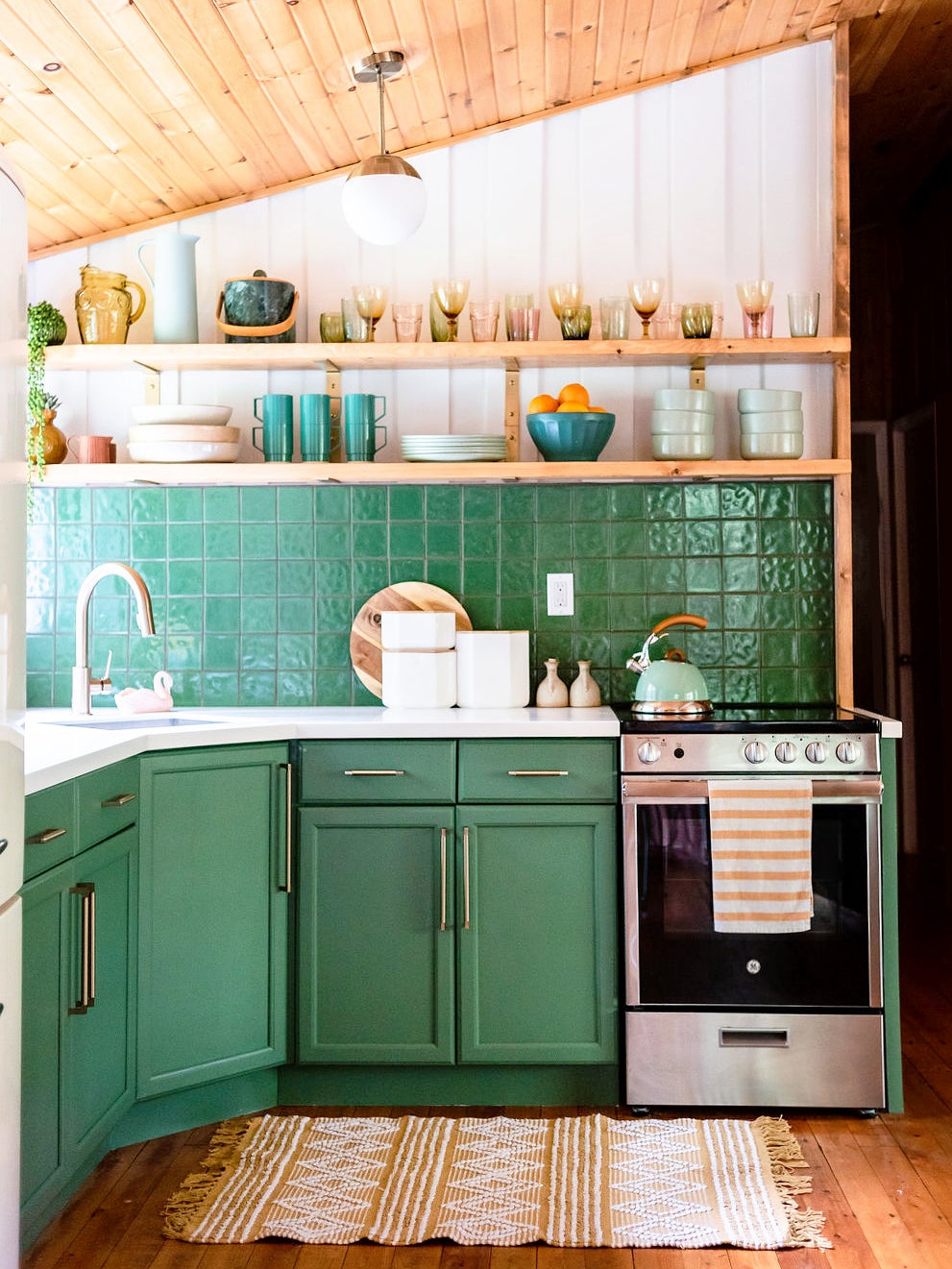 Cabin life in Canada is kind of like hockey and poutine: It’s a religion. Melissa DiRenzo, a Toronto-based graphic designer and art director, felt the pull of nature a year ago while en route to visit a friend’s cottage in Muskoka, a popular lakeside destination a few hours’ drive from the city. “I was on my way when this listing came up. I decided to just pop by and check it out,” she remembers. That pit stop resulted in DiRenzo spending the rest of the weekend glued to her phone to make sure she’d have an accepted offer by Monday. Her goal: Turn the tiny, wood-paneled mid-century home on the Muskoka River into a summer retreat for herself and like-minded vacationers (the property is also available for holiday rentals).

DiRenzo had immediately taken note of the house’s move-in ready state—it had been well maintained by previous owners and came fully furnished, albeit in mismatched cottage-style pieces (antlers, plaid, and all). “I was able to see past all the dated decor and focus on the potential,” she notes. Working with an $8,000 budget, she gave the 730 square feet a fresh facelift.

Work With (Not Against) the Grain

“I wanted to challenge myself to keep as much wood as possible. It gives the space so much warmth, and it’s much easier to maintain,” says DiRenzo. So she chose to give only a few key areas a coat of Sherwin-Williams Extra-White paint. First up: the back wall in the living area.

In two bedrooms, DiRenzo painted the walls and left the original ceilings as is, but she changed course for the third, coating only the roof in white. “I would be lying if I didn’t admit that laziness played a small part in this decision,” she says, laughing. “But I ended up really loving the contrast.”

Give the Kitchen a Green Glow-Up

To keep costs down, DiRenzo stuck with the original kitchen cabinets but removed the upper cupboards in favor of floating shelves. Inspired by the wilderness outside, she dug up a $2-per-square-foot olive green tile for the backsplash on the Home Depot website. “It’s worth really sifting through their products to find some hidden gems that you won’t see in the store,” she says. The doors, covered in Behr’s Greener Pastures, match the backsplash and, because DiRenzo couldn’t find a similar grout color, she mixed her own with the leftover paint. A new quartz countertop and upgraded appliances round out the space. (Her biggest splurge: a vintage-looking refrigerator from Chambers.)

Distract From Bland Bathroom Fixtures With a Mural

DiRenzo still plans on giving the bathroom a gut makeover, but in the meantime, a few quick fixes hide the dated builder-grade finishes. After swapping the hardware and faucet for brushed brass alternatives, she had her biggest stroke of genius to date: A stick-on mural by artist Gale Switzer. “It was a last-minute decision because I didn’t really know what to do with the bathroom and was running out of time, but now it looks like it was always meant to be in this space,” she says. “It went from being my least favorite room to my second favorite.”

Her first love (not counting the outdoor space) will always be the main living room. “It makes me so happy when I open the front door and see that cheerful pop of green and the shelves full of vintage treasures,” she says. “With the fire on, it’s the coziest scene you could ever dream up.”