The actor just sold his artist alcove for nearly double the price he paid for it. 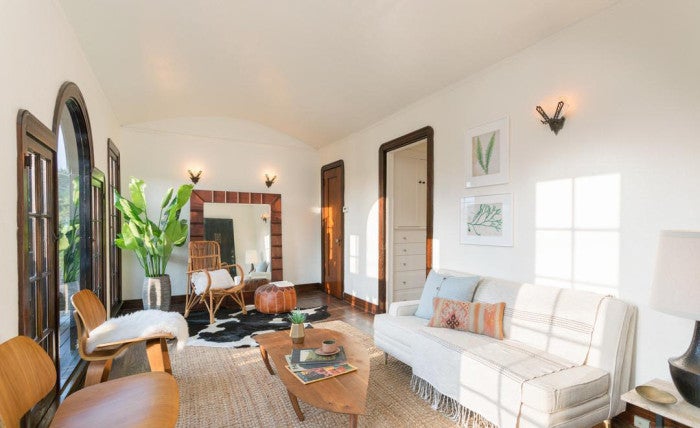 James Franco’s cool artisan pad just made the actor-director quite the pretty penny. According to Los Angeles Times, the Spanish-style home sold for $1.35 million—which is $401,000 over the asking price of $949,000, and almost double of what Franco initially paid for it.

And its not hard to see why: The unique two-unit, three-bedroom, three-bathroom home still features much of its original style and charm. Nestled in the prime location of Silver Lake, CA, it has been reported that Franco bought the property way back in 2012 for $775,000.

Built in 1923, the 1,496-square-foot duplex is inspired by the time period’s popular Spanish architecture, with its deep red clay roof tiles, dark window trim, and multiple exterior staircases. On the outside, a tiled terrace that’s perfect for entertaining sits atop a two-car, street level-covered car port.

The living room that leads to the compact kitchen of the larger, upper unit is accented by an exposed wood beam and butcher block counters, matching the home’s rustic, craftsman vibe. The wood contrasts with the pale neutral walls, while the kitchen cabinets and barstools provide seating at the raised snack counter.

Featuring European-style, open floor plans, the living areas are grounded in vintage Saltillo tiles, while upper level rooms have dark hardwood planks. One of the bedrooms or main living spaces could easily be converted into an office or art studio, especially given the range of large, arched, and multi-paned windows—they let in tons of natural light.

According the the listing photos, the writer/director/producer/Oscar-nominated actor has chosen to decorate with lots of earth tones and natural materials, which add to the cozy, rustic look. A painted white brick fireplace and neutral bedding in the master bedroom further accentuates that old-school charm.

But one of the home’s best features is its amazing view of the Hollywood sign. Walk up to the top-floor “crow’s nest” via the home’s exterior staircase to enjoy incredible views of the sign and surrounding landscape—sights include the Silver Lake reservoir and Griffith Observatory. True to his nature, Franco’s home is the ultimate boho Los Angeles residence for reflecting, entertaining, or creating.

The sale was executed by Andrew Morrison of Redwood Real Estate Brokerage and Imraan Ali of Compass—but with such a stellar increase in value, maybe Franco should add real estate capabilities to his growing list of talents.