An Inside Look at Home Decor Through the Decades 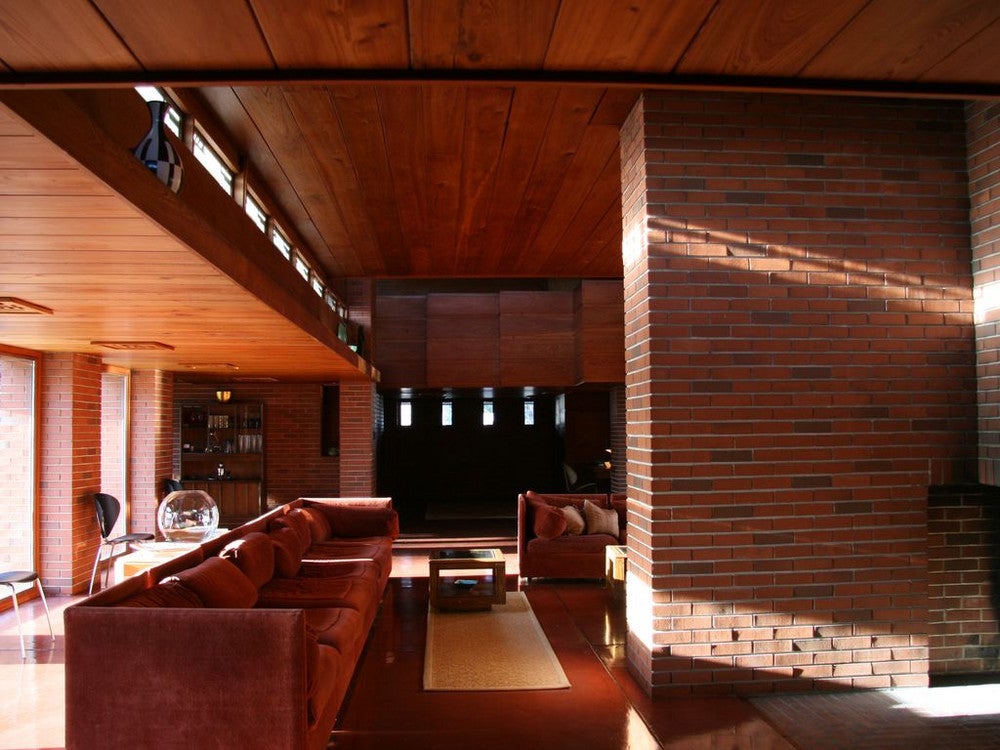 From decade to decade the American home has had its defining design moments and embraced its share of decorative trends. Homes in the 1920s were decked out with glamorous, exotic decor, while those from the eras of the Great Depression and World War II came outfitted with practicality and simplicity in mind. Over the past century interior design has evolved in response to technological and cultural shifts, along with events happening on a larger national and global scale.

“If you look at the average, [of how] Americans lived 100 years ago compared to today, there’s been an upgrade in the type of home you live in,” says Richard Wilson, an architectural historian at the University of Virginia. “There is more economic wealth — and more of a middle class and upper class.”

As more wealth has been acquired, over the past century, homeowners have invested more time and money into making their house a home by appropriately outfitting their abode with the latest designs.

From the Roaring Twenties to the ’90s, let’s dive into each decade to see what dictated these interior design trends and how people lived at home. While some of these decorative fads may seem very outdated, there’s plenty of inspiration to draw from the distinct designs that helped shape each decade.

The Roaring Twenties was a glamorous decade with much celebration and hospitality. Naturally, given the ample number of house parties, cocktail cabinets were all the rage.

The mid-twenties signaled the birth of interior design as a profession in the United States with home decor influencers like Dorothy Draper. Overseas in Europe, the Bauhaus movement (the revival of fine crafts) was gaining momentum. Art Deco, with its geometric motifs, bold colors and glamorous materials, was popularized by the middle of the decade. With this focus on aesthetics, more and more fine crafts and objects of art were brought into the home. And modern architects like Le Corbusier started contemplating interior design by creating design-focused furniture for the home.

According to Wilson, the increasing electrification of the American home played a monumental role in changing the way the standard household operated. In 1925, the electric refrigerator was introduced, replacing the ice chest.

With the opening of New York City’s Museum of Modern Art (MoMA) in 1929, modernism was no longer an obscure, far-flung concept, but a transformative movement that was making its way into homes. “MoMA was a big, big, big breakthrough,” says Wilson.

The stock market crash of 1929 led people to live with more practicality and simplicity in the ’30s, compared to the glamorous ’20s. Although the decade was marked by the doom and gloom of the Great Depression, the design movement was still flourishing.

Echoing the sorrow of the stock market crash, modernism was defined by simple silhouettes, muted colors and an absence of ornamentation. The Art Deco movement was still in full swing from the 1920s, making its way into the home with stained glass windows. Leather armchairs became a living room mainstay.

While the first planned suburb made its debut in 1853, in New Jersey, suburbanization across the U.S. fully took off in the 1930s, according to Wilson. MoMA’s “Modern Architecture: International Exhibition” in 1932 helped further the modern architecture movement by showcasing works of Frank Lloyd Wright and putting architects like Richard Neutra on the map. “It helped to legitimize this kind of change,” says Wilson. Architect Frank Lloyd Wright’s Fallingwater—his most iconic work and one of America’s beloved modern residences—was constructed.

The hardships and frugal mindset from the thirties continued into the forties with World War II. With the end of the war in 1945, there was recovery and revitalization. Husbands and sons were coming back from the war, and the home was once again a happy place with family gatherings.

Post-war, the California-based magazine Arts & Architecture preached the doctrine of modern homes, which later segued into a series of case study homes where designers like Charles Eames built modern houses across Southern California.

The Ranch house, which was originally conceived by California architect Cliff May in the early 1930s, was becoming a popular architectural style in suburbs during the post-war boom, according to Wilson. These homes were characterized by their open-concept living spaces with big windows and sliding glass doors that opened up to the backyard.

Hollin Hills, the first modernist suburb in the country was established in Northern Virginia by D.C. architect Charles Goodman. Kit homes by companies like Sears were popular for middle-class families in the suburbs and came in a variety of architectural styles like Cape Cod and Colonial.

Inside the home, new materials like linoleum were being used for flooring and metal for cabinetry. With war no longer looming on the horizon, homes were joyful and sentimental with frilly draperies, floral patterns, and embellishments such as embroidery. Sunny, saturated colors were welcomed back into the home with bold pairings like red and blue and yellow and green.

The electrification of the home continued with the introduction of the telephone.

In tandem with the post-WWII boom was the proliferation of Ranch homes and other modern homes with open-concept living. In the 1950s, televisions were being introduced into the home, which in turn created more informal living spaces where the family could comfortably gather around and watch the news along with their favorite shows.

Military officials who were stationed overseas during WWII brought back mid-century modern furniture and decor from Scandinavia and other European countries and incorporated them into their homes. Molded plywood seating from designers like Norman Cherner and plastic furniture by Charles and Ray Eames were becoming prevalent in homes. Other cutting-edge materials were welcomed as well (think PVC, Formica and melamine).

While this decade is remembered for “mid-century modern,” many homes embraced traditional “early American” style with Americana themes, plaid fabrics, wood paneling, Colonial furniture, and heirloom pieces. A more modern version of Dorothy Draper’s black-and-white checked floor came back in vogue, but instead of tile, it was vinyl. Kitchens were “fitted” with appropriately sized appliances, and cabinetry and dinette tables were topped with easy-to-clean Formica. Unique colors like bubblegum-pink and pistachio-green made an appearance.

Danish modern furniture started making its way across the Atlantic in the 1950s, and by the 1960s there were “modern lifestyle” stores like Design Research in Massachusetts, New York, and California, each selling Scandinavian furnishings and decor, according to Wilson.

Naturally, the ’60s conjure up words like “psychedelic” and “groovy”—which also happen to describe some of the home decor trends during this vibrant and progressive period of time.

Pop art by artists like Andy Warhol made its way into homes with posters and wallpapers. The Art Nouveau style from late 19th and early 20th century were revitalized but given a psychedelic twist with wild colors and more dramatic angles.

With TV shows like The Jetsons, Twilight Zone, and Star Trek, the space age infiltrated the home with furniture that was futuristic in appearance, construction and materials—the suspended acrylic bubble chair by Eero Aarnio and tulip base swivel chair by Joe Colombo.

The end of the Vietnam War and groovy disco music signaled a more fun and playful aesthetic for this era. The American abode took on a more eclectic look with a mix of styles—mid-century modern furniture from Scandinavia paired with futuristic seating from the sixties. Animal prints were juxtaposed with psychedelic patterns leftover from the sixties; and saturated colors like burnt orange, olive greens and fuchsia were everywhere.

Geometrics made an appearance in furniture design, textile patterns, and artwork. Transparent materials like glass and lucite were juxtaposed with high-contrast materials like chrome and black marble. Low lounge furniture and conversation pits with built-in furniture and sunken floors were popular for casual gatherings. Ergonomic seating was introduced by Herman Miller with the Ergon Chair.

Homes designed during the ’70s also embraced a more Bohemian and organic aesthetic. Plants were plentiful and macrame was introduced in the form of wall art and plant hangers.

Huge technological advances in the 1980s allowed this generation of people to be fully connected. It was the start of the computer age and the birth of cell phones. Television networks by the likes of CNN, The Weather Channel, and MTV were born. People listened to Madonna and Michael Jackson on their giant stereo systems, and video cameras were used to capture memories at home. Naturally, this connectedness informed people of style and helped with their decorative decisions at home.

Windows were overdressed with extravagant treatments (we’re talking fluffy curtains and valences along with plastic vertical blinds) while wallpaper was utilized in both traditional and modern homes.

Modernists of this time period embraced a more contemporary take on Art Deco, decorating with coated leathers and vinyl, glitzy mirrors, glass surfaces, and graphic black and white schemes. Abstract and geometric patterns were found in artwork and fabrics. Muted pastels like peach and teal were hugely popular.

On the opposite end of the spectrum, there was a preppy side to the decade. Laura Ashley popularized floral motifs with her muted take on the classic English-country aesthetic, compared to the bold chintz of Dorothy Draper’s era. The frilly, matchy-matchy look of Laura Ashley also segued into the shabby chic movement with faux antiques and cottage-inspired decor. Ralph Lauren was also a major player during this time period, having started manufacturing furnishings in his signature preppy-Americana style.

TV sitcoms like Full House and Friends are great examples of home decor trends of this era, showcasing two different takes on styling the ’90s home. The eclectic decor of Friends signals the donning of maximalism, mixing styles, patterns and colors to showcase a more thrifted and collected style, whereas in the Tanner household you’ll find a more ’90s-country look with pine wood and gingham fabric.

The shabby chic movement continued full steam into the ’90s with white wicker and precious florals. As a contrast to the decade’s grunge, metal and rap music, sweet and sentimental Grandma-like decor was found in the home with frilly fabrics, embroidery and silk plants.

With the birth of Vera Bradley’s bold patterns in the early ’80s came liberal pattern mixing in the ’90s. Gingham, florals and stripes could all be found coexisting in a room, and even layered upon one another.

The last giant wave of color swept the decade with primary colors, before the arrival of the earthy neutrals.

Window treatments continued to be large and in charge with layering matching valences and curtains. In lieu of wallpaper, walls were sponge painted or gussied up with murals and stencils.

And with the computer era in full swing, entire rooms were dedicated to the home office with built-in desks and bookshelves. Bulky entertainment centers were also popular to house big screen TVs, massive stereo system and audio equipment.

Discover the trends that are making a comeback:

According to Google, This Decade’s Design Is Making a Comeback

Our 12 Favorite Decor Items of Decades Past

Can You Guess Which Throwback Trend is on the Rebound?