Inside feels even bigger thanks to the indoor-outdoor flow. 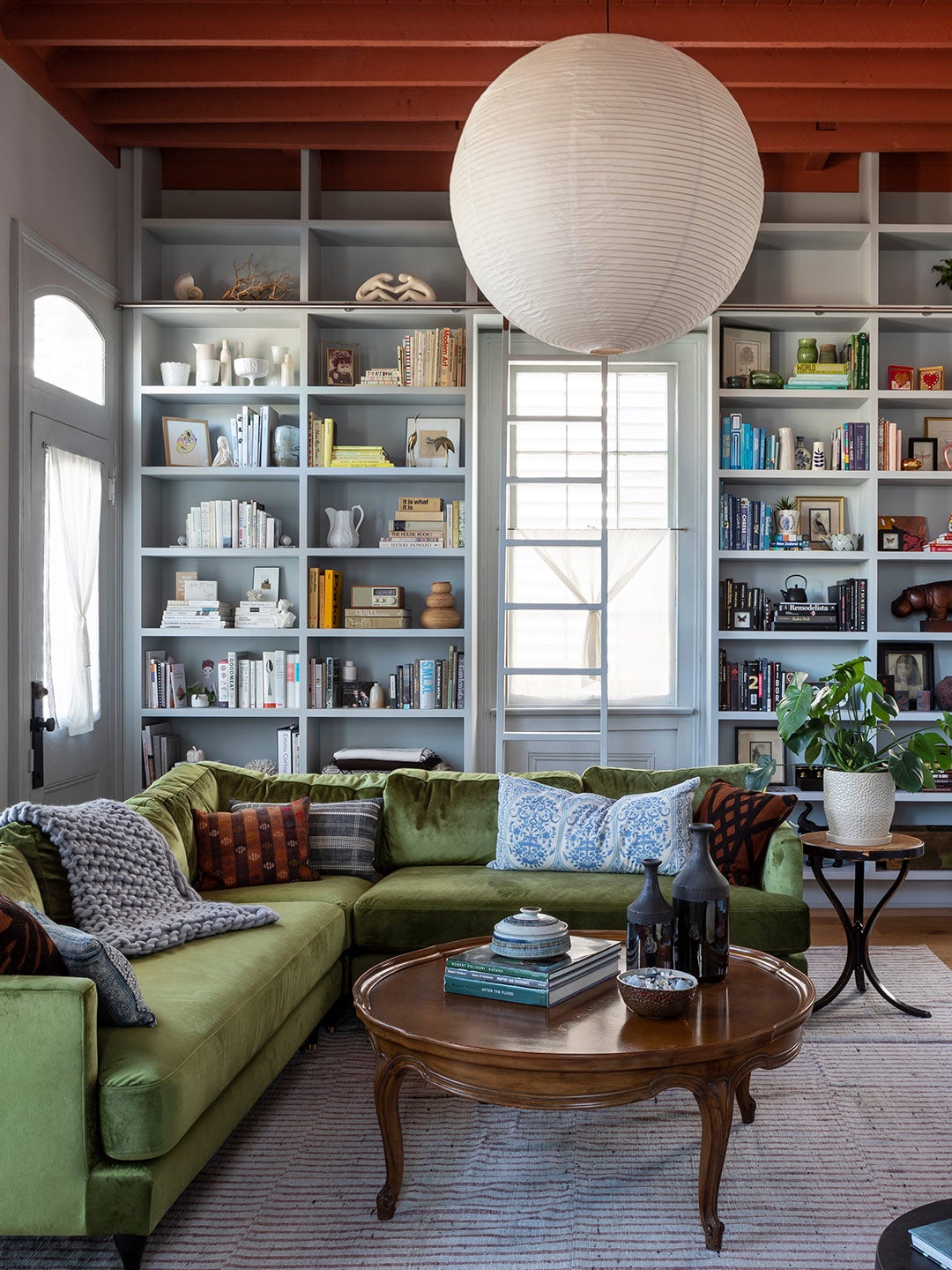 You would think putting in gutters would be the least problematic part of a renovation. But Ellen Sitkin’s New Orleans home isn’t like most other houses. Any permanent upgrades she made to the circa-1914 structure were subject to the jurisdiction of the Historic District Landmarks Commission. So when the graphic designer, who had moved Down South from New York with her husband and two kids back in 2018, and her architect, Kim Allen, of the husband-and-wife–run firm Studio BKA, decided to have the spouts attached to the sides of the porch’s columns, they were swiftly told to take them down. “You could see them from the street and that violated a rule,” recalls Sitkin.

Fortunately, when it came to painting the formerly beige-brown exterior, Sitkin got the green light. And because most of the other facades on her block are some shade of blue, she went against the grain with bubblegum pink. “Living in New Orleans, where the houses are super-colorful, I was like, I have to make it brighter. This is silly,” she says. Inside, she and Allen focused on making the layout feel less choppy while infusing it with some much needed charm. Read on for a few standout takeaways from the makeover.

Sitkin and Allen’s original plan to introduce more natural light to the second level of the home was to add a shed dormer to the roof, but when the review board shot them down, they moved on to plan B: skylights. The one now situated over the staircase leading up to the playroom and guest bedroom doubles as a spotlight for the kids’ art display in the entry.

In the library, they simply removed the drywall to expose the ceiling beams. Not pictured: the tongue-and-groove paneling the architects added in between the rafters for a touch of texture. “You see this detail a lot in homes in Cuba and the Bahamas,” notes Allen. Sitkin chose the green velvet sofa that faces the large-scale charcoal drawing she made back in her college days because it reminded her of the one she grew up seeing in her grandmother’s house. “That room is totally my room,” she says. “Everything in there is very personal.”

Throughout, Allen enlarged the home’s thresholds to speak to what the place likely looked like back when it was originally constructed. (During the gut, they discovered the older, taller openings had been closed up by a past owner.) “In New Orleans, when handymen come in and flip these homes, they don’t put in the historic door-opening size,” she explains. They solidified the revamp by framing the openings with traditional Greek Revival–style casings.

For Sitkin, the driving factor for purchasing the shotgun-style home in the first place was the yard (it’s technically a double lot, meaning another house can be built on the land). Studio BKA made the most of the outdoor space by building out a 52-foot-long, 8-foot-wide porch that’s now lined with doors leading to various interior spaces. “We had actually put in an offer on a house nearby that had a kitchen that opened up onto the porch,” recalls Sitkin. “That was the vibe I was going for here.”

The fireplace that divides the dining space from the family room is a reminder of the home’s double-shotgun history (there used to be a wall running through the center of the home, effectively dividing it into two residences). But the days of visual barriers are over. The architects installed a 14-inch-thick LDL beam in the ceiling so they didn’t have to put any pesky columns anywhere. This left them with an open-concept kitchen, where a long island with seating is situated at the heart of the room. “We almost never use the dining table,” notes Sitkin. The cabinet frames were a budget-friendly choice (they’re IKEA!), but when Sitkin discovered Copenhagen-based company Reform, they swapped out the standard door fronts for the brand’s smoke-stained, rough-sawed oak ones.

Above the vanity, an IKEA medicine cabinet is framed by two mirrors to make the piece appear more substantial (the attached sconces are vintage ones Sitkin sourced on Etsy). Exaggerating the height of the wainscoting from the typical 3 feet to 6 feet meant they could mount pegs around the top board for hanging up towels.

But Allen didn’t want the primary bathroom to just look good, she wanted it to feel like it had a story. “I didn’t want anything in this house to only be about function,” she explains of her decision to go with a curved glass and metal shower enclosure and turned vanity legs. This space received everyone’s stamp of approval.