Everything You Need to Know About Himalayan Salt Therapy

This powerful method has a whole lot of health benefits. 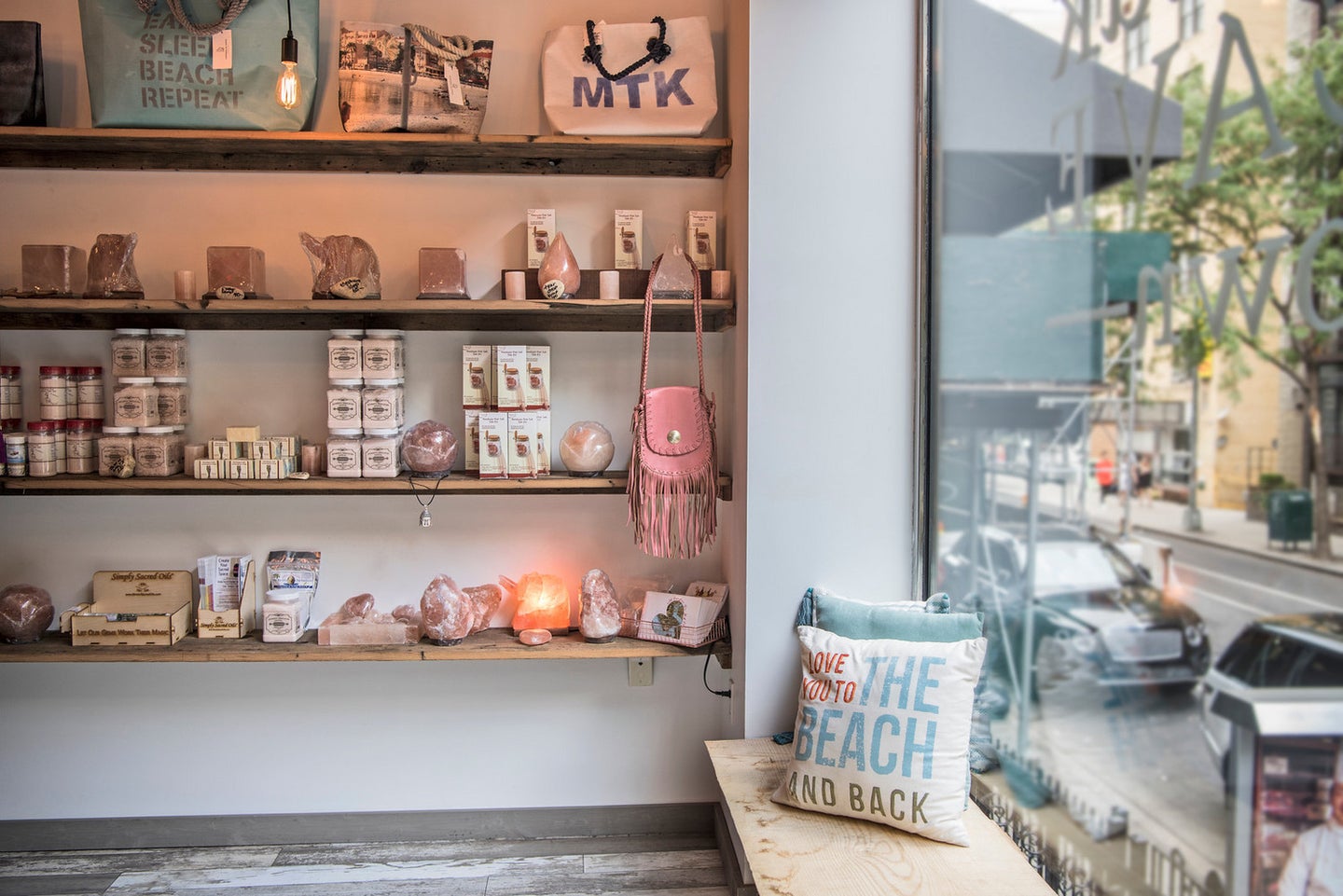 in New York City, you’re automatically filled with a sense of calm. Taking its inspiration from the beach, the space boasts cheerful colors and a colorful sitting area, and is surrounded by healing pink Himalayan salt products, including lamps, bath products, and soaking salts. The cheerful vibe is accentuated by the large glass windows providing tons of natural light, and the front desk covered in colorful prints.

However, step inside the cave, and it’s a whole other story. Featuring two rooms (one for children and one for adults), Montauk Salt Cave tries to emit a feeling of pure bliss. Twinkling lights on a navy ceiling make you feel like you’re relaxing in the countryside, and the warm chairs, salt-covered floor, and light music in the soundproof room was just what this busy New Yorker needed. The warm, fuzzy feeling was only accentuated by the soft blankets surrounding the space, and after just 40 minutes in the cave, there was a feeling of rejuvenation—like a clear head of sorts. To learn about the science behind this magical room, we chatted with Shannon Henry, the brains behind the entire operation.

What sparked your interest in Himalayan salt therapy?

Our son, Oliver, had severe respiratory issues when he was born, and the pediatricians were just very quick to diagnose him as asthmatic. As a first-time mom, I just did what the doctors said, but I always thought it was bizarre because I didn’t have asthma, my husband didn’t have asthma, I didn’t smoke. It was kind of weird. So we did the steroids, we did the chambers, we did the inhalers, and there was really no relief.

So then, we took him to an ENT and we had an endoscopy done, and his adenoid was blocking 95 percent of his airway. We’re like, “Great, we’ll have that removed, he’ll sleep.” I mean, the child never slept because every hour, on the hour, he was coughing. But the surgery didn’t give him any relief. Nothing worked at all.

And then a friend said, “Why don’t you try salt therapy?” I didn’t know what it was. But we took him to a salt room in New Jersey on my mom’s birthday, and that’s when he slept through the night for the first time, at 4 and a half years old.

This was just in one day?

Yes, well, the salt therapy works a lot quicker for children because their respiratory system isn’t fully developed until they’re 9. But, my husband and I both were kind of like, “Wait a minute—is this a placebo? Maybe he’s just tired.” Well, my husband has lyme disease and I’ve always had eczema in the winter, so we all went that Sunday before going back to Montauk. And we all felt better. That’s when I said to my husband, “Can I build one in Montauk?” Because so many people have lyme disease in Montauk, allergies… and I just wanted to make a healing center because it was something we didn’t have. So we built the first one in Montauk two and a half years ago, and now, we’ve expanded to Noho and Huntington too.

What are all the benefits of Himalayan salt therapy?

It fights anxiety, depression, respiratory issues, and relaxation, but also all autoimmune. So, a lot of customers that we have have rheumatoid arthritis, and also skin issues like eczema, psoriasis, dermatitis, and rosacea. It helps lyme disease, arthritis, migraines. People will come who either have a migraine, or what they call a migraine hangover, and they’ll come and they’ll sit in here, and their head just feels relief. It’s super, super healing, as far as what you can gain from the salt.

I just got an email from a customer who does have lyme disease, and when she has the flair ups—because what happens is that your joints will flair up—she’ll come and sit in the salt, and then she’ll be fine. It also helps with sleep disorders and digestive disorders. If you heal your gut, everything else seems to just fall into place.

What do the caves really consist of? How do you know it’s true Himalayan salt?

We source ours from Pakistan. The Himalayan salt has 84 trace minerals that are found in our body, really rich with magnesium, which is why a lot of people suffer from depression and anxiety—because they’re lacking magnesium. So you’re getting the mineral boost while you’re in here, and we use pharmaceutical-grade salt. It’s the same salt used in hospitals: It’s anti-viral, anti-bacterial, anti-fungal, anti-microbial, anti-inflammatory. So it’s great to just inhale the salt and absorb the minerals. Some places will build it with red salt from Poland and say it’s Himalayan salt, but it’s not. Just like anything else, you do it either with the quality, or you just don’t do it.

How have you created that kind of comfortable, soothing environment?

We have the chairs, low lights. We have the sky that looks like twinkling stars. We have blankets, so people can just curl up and be warm, because the room’s a little cooler and dry because the salt can’t have moisture get into it. I just want pure relaxation and comfort, and that’s the thing with the salt: It just forces you to relax.

You sit in the room for 45 minutes—that’s it. But we do offer Kundalini meditation on Thursdays at 6pm and Fridays at 11am.

It’s like a Himalayan salt lamp on steroids. The salt will send out negative ions. So when you have a lamp in your home and you have it plugged in, it’s emitting the minerals and the negative ions. This is, in turn, sucking up all the impurities and the dust. It’s great to have a salt lamp next to your computer because it sucks all the bad radioactive stuff.

How does somebody new to Himalayan salt therapy start? How would they manage to just tune off for 45 minutes?

Well, you’d be surprised. So many people will say, “I can’t sit still for 45 minutes, I can’t shut it down.” And then the session’s over, and you have to open the door and be like, ‘It’s over.” And they’re like, ‘Wait a minute, what? We just got here.”

How often would you recommend someone come in?

It’s similar to going to your chiropractor or to your acupuncture appointments, but there’s different protocol for different things. For instance, asthmatics—now is the time to treat them, because asthma is always far worse in the winter months, when the cold weather tightens your lungs. So the idea is to come now as much as you can to open up your lung capacity. Then also, if you’re allergic to something, you come as frequently as you can before that thing blooms to build your immune system. If it’s for relaxation, stress, anxiety, I would definitely say once a week. All autoimmune things, once a week.

Your Definitive Guide to Facial Oils How Home Decor Can Affect Your Wellness How to Fight the Flu, Naturally