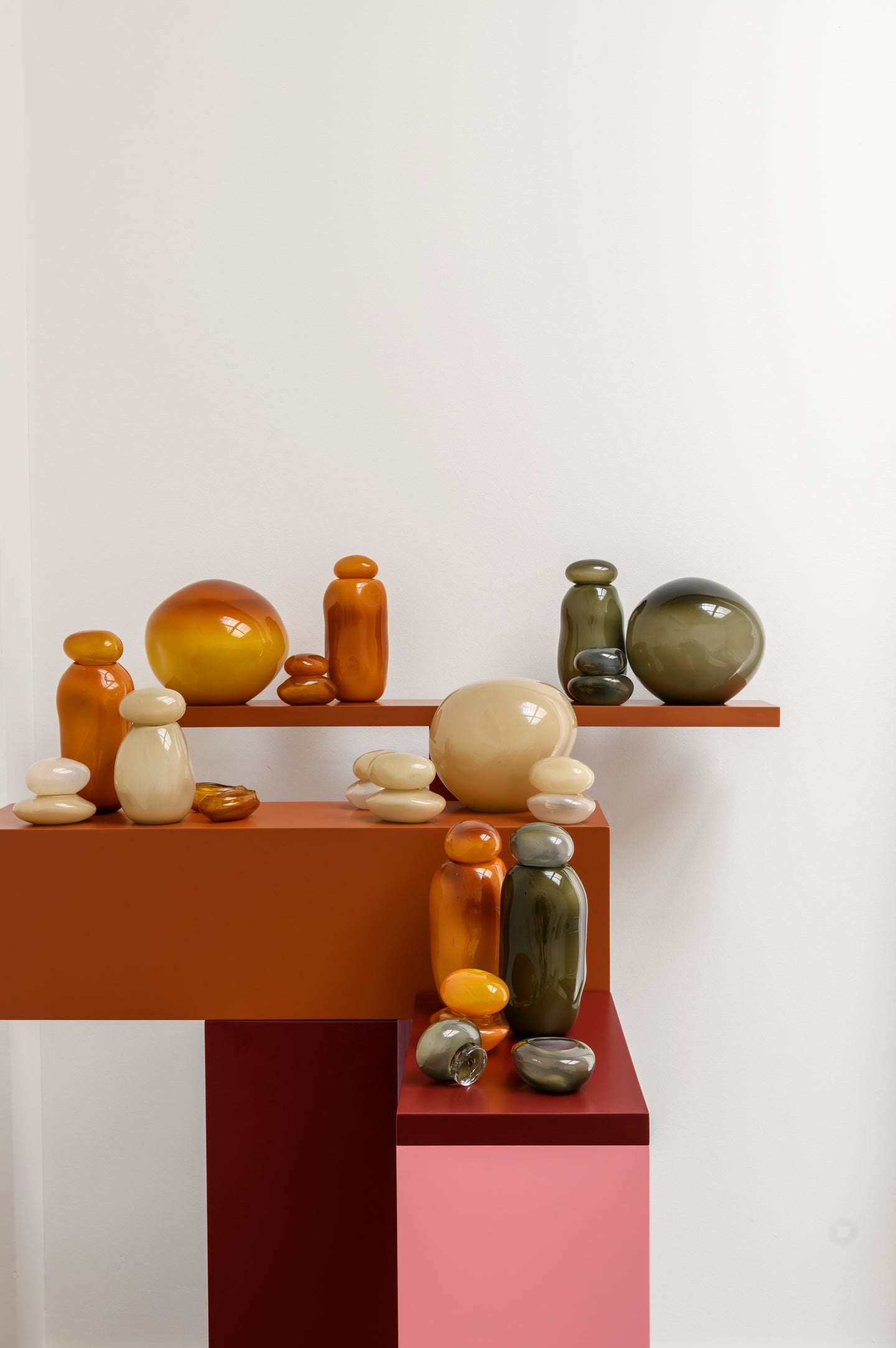 Ten years ago, Helle Mardahl had a dream of opening up her own sweet shop. The Danish designer pictured her own Willy Wonka–inspired universe, where children could dive into an ever-changing display of colorful candies. No one would have been able to predict that her delectable fantasy would eventually lend itself to a scrumptious line of glassware.

The candy-like creations in question range from table lamps to catchall dishes—each crafted from mouth-blown glass and designed in Copenhagen. The longtime artist changed gears to glassware two years ago when she launched a series of spotted glass lamps and orb-like objects. The speckled spheres would eventually earn the apt title, Egg Collection.

“You can’t not love it,” says Mardahl of the lavish material. “There are so many ways of creating glass. It’s almost like a candy shop itself—a never-ending story of playing with color.”

Color plays a powerful role in Mardahl’s more recent Candy Collection. True to its name, the rainbow-infused collection encompasses sweet shades of bubblegum pinks, honey-colored pendant lights, and art objects reminiscent of jelly beans and bonbons. Fragile and flavorful, the temptation is true: You really do want to take a bite.

Ahead, the designer gives us a taste of her candy-colored world.

On pushing the boundaries of predictability…

In collaboration with the professional glass blowers who bring her visions to life, Mardahl looks to infuse each unique piece with a sense of irregularity. There’s always something that’s… off.

“It needs to be a bit odd,” she explains. “If you’re a good artist or a good designer, you take something that is very recognizable that has already got an audience and then you break it. You make it art.”

Mardahl puts her own twist on the rulebook by taking, say a traditional pendant lamp or decorative dish, and pushing it one step further. Aside from the fact that the object’s blob-like forms are decidedly endearing, suddenly, the ordinary home object feels a bit more personal. “It’s fragile. It’s made by hand. It’s sweaty. It’s fierce. It’s hot. There’s a story behind it,” says Mardahl.

courtesy of helle mardahl Photography by INSIDE CLOSET

On turning her sweet tooth into a dream collection…

As one would expect from a typical confectionary, Mardahl’s Candy Collection started with simple experimentation. She took her existing table lamp and began exploring the different effects of new colors, combinations, and glazes. “It became very appetizing, like a bonbon that you just want to put in your mouth and lick,” says the designer.

Soon after, Mardahl started mixing things up, placing different colored caps on top of one another—a delectable pairing which she refers to as a bonbonniere. “It became the Candy Collection very naturally because we all wanted to eat it,” she laughs.

On the never-ending search for newness…

Mardahl might have found her secret ingredient, but that doesn’t mean she’s still not searching for new recipes. “I do a lot of research to see what’s happening,” she shares. When Mardahl’s not popping by the glass blower’s studio, syncing with her assistant about upcoming orders, or taking a meeting in her showroom, you’ll find her on YouTube.

“I love to watch videos of glass blowing. It calms me,” she admits. “I’m always getting ideas, asking, ‘What if I put this color underneath her to create this?’ Or, ‘How much clear glass do you have to use to get this depth?’”

On working both sides of her brain…

“I’ve always been the artist. My whole life has been one big art piece. I had never really been into Excel sheets, but wow, I do a lot of that now,” laughs Mardahl.

While the designer has long been acquainted with her creative side, running a business gave rise to new tasks that were sometimes unglamorous and monotonous. After enjoying her obligatory dose of caffeine for the day (Mardahl kicks off each morning with back-to-back coffees), she’ll get down to finances. “I actually get a bit excited about sitting down and sorting it out,” says the designer. “I also have two children, so it’s lovely to have something concrete to do.”

Still, in the middle of Excel sheets, urgent emails, and important conference calls, Mardahl can snack for a moment on the candy-like creations that began with dreams of a pastry shop.

This Creative Director Is One of Instagram’s Best Curators

This Inspired Line Made Me a Colored Glass Convert