He chats inspiration and his new collection for The Future Perfect. 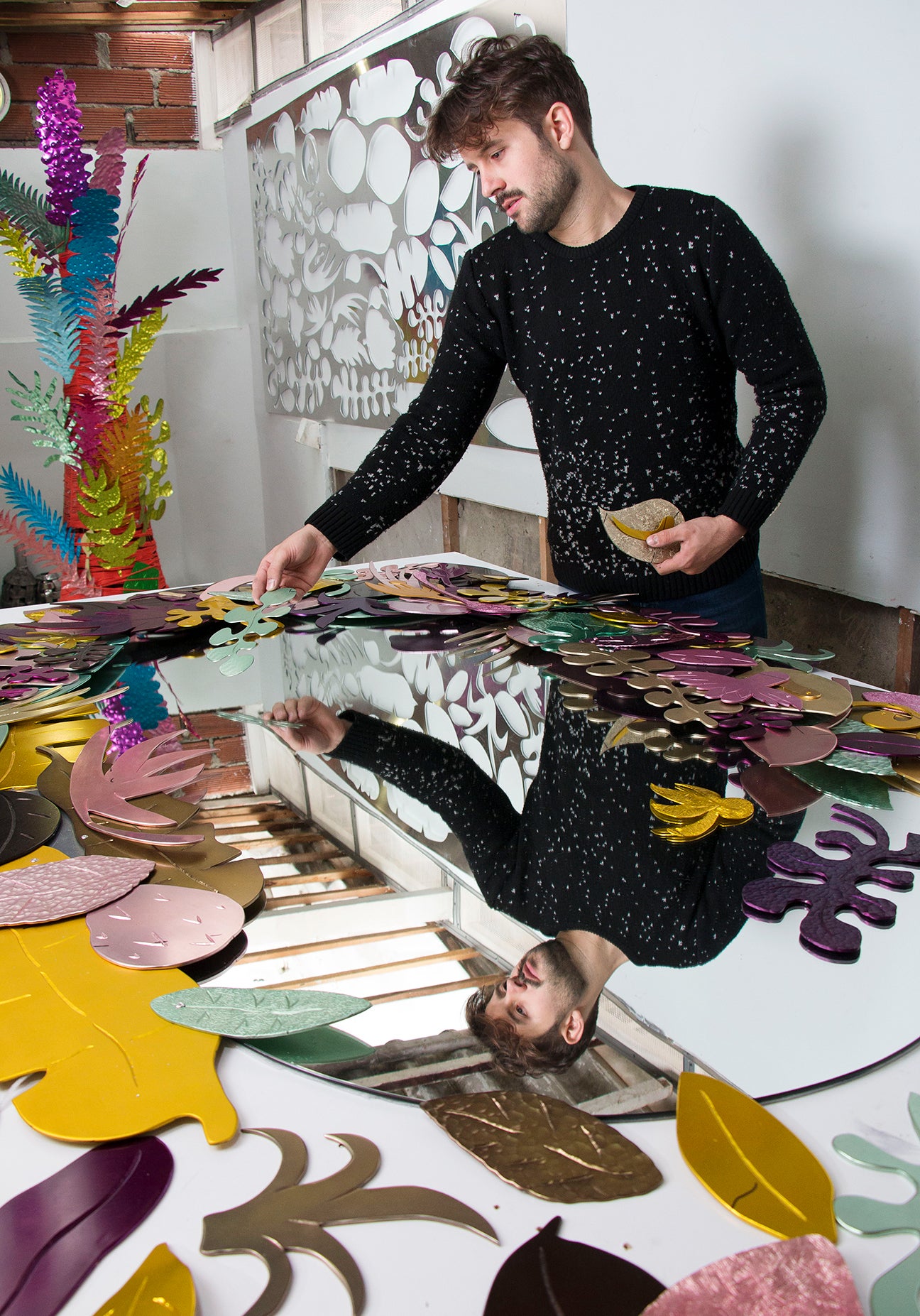 In New Voices, we shine a spotlight on inspiring up-and-coming talent shaping the future of their respective industries. Consider this the new class of creatives.

Like many artists before him, Chris Wolston has found plenty of inspiration in the great outdoors—stretching all the way back to his childhood in Providence, Rhode Island. “I’m a twin, and my twin and I were pretty different growing up. I had a little garden in my parents’ backyard, and when my brother would go play soccer on the weekends, I would stay home and work on my plants,” he says, laughing. “I wanted to be a landscape architect.”

Wolston’s career aspirations, however, transformed over time when he started working with materials a little more permanent than perennials. His collection for The Future Perfect is flush with “foliage”—made of aluminum, terracotta, and wicker. He is quickly becoming one of the most exciting furniture designers around, blurring the boundaries between outside and in, realism and fantasy, contemporary and pre-Columbian. Here, he shares his journey and the things that keep him inspired.

What was your childhood like? Besides gardening, my favorite thing to do when I was a kid was dumpster dive. When the Brown University students finished the year, they would always roll in this huge dumpster. I loved going and picking through it for treasure. I grew up in this really old house with a big attic, so we would deck it out. One thing I remember we found was this antique three-legged table that had three tiers painted with different colors.

What did you study in school? I ended up going to the Rhode Island School of Design, and I was in the glass department. I’ve always been interested in materials—as a kid, I loved working with different ones and seeing them transform. When I graduated, I was awarded a Fulbright scholarship to study in Medellín, Colombia. I was looking at how terracotta is used in a brick factory, where the bricks are made by hand, and then how it’s used in an industrial way, with mechanized extruders and conveyor belts and two furnaces.

What were your first creations? I was making different sculptures with these materials from the brick factory and an aluminum foundry. I felt like the sculptures fell short; I wanted to create something with more of a human relationship. I started making terracotta furniture—these large chairs that have planters built into them. They ended up being in a show that I did down there, and the rest is history.

What happened next? I thought, why don’t I create this practice between New York and Medellín that not only utilizes the material connections that I’ve made, but also exports a different material history from Colombia than people know? People are really familiar with the drugs and the violence, but there isn’t as much of an understanding of these incredible practices and sensibilities.

advertisement
“I’ve seen so many more colors of green in my time being there than I ever had before.”

Where are you finding inspiration now? Recently, with the work that I’ve been making for The Future Perfect, a lot of the inspiration comes from my garden in Colombia. I’ve seen so many more colors of green in my time being there than I ever had before. I thought, wouldn’t it be nice to bring these elements of the tropics into the home? I remember very distinctly being in my apartment in Chinatown and thinking, Oh, my God, if I could only have my garden here. So I said, okay, this is what the next collection is going to be.

What’s the best part of your job? I think that there’s this notion that, because we’re making furniture, it’s manufactured by a factory. But we have a studio setup, so it’s me and four other team members down in Colombia. In this collection we just released, there are new wicker chairs. To make them, we traveled around the city and out to the countryside and found different artisans working with the material. For me, that exploration and discovery is the most exciting part of what we do.

Now on the flip side…what’s the worst part of your job? Because our pieces are made in Colombia, there’s a really intense narcotics inspection that they sometimes go through. We’ll pack crates up and they’ll get to the airport and be opened up, drilled through…there’s a hell of a lot of funny experiences with that.

Favorite method of procrastination—go: We’re down in the city now, but when the studio used to be over at the house, I would get totally distracted. One of the things I liked to do was hike around the different farms and dig up plants and bring them back to the house. We have various fruit trees and species of native flowers. There’s a lot of work [to do] in the garden, and I have to really set guidelines for myself to not get sucked up in it.

What’s something you’re guaranteed to do every day? There’s usually someone cutting out leaves for the chandeliers. All of the leaves are hand-cut, so we have different shapes that we reference. The leaveswill be drawn up on the aluminum and then cut out with sheers. After that, they get hammered to get the texture. Each chandelier has about 80 leaves.

“There’s something really interesting in creating public spaces—not a park and not an amusement park, but something in between.”

Sky’s the limit: Where do you want to take your career next? There’s something really interesting about creating public spaces—not a park and not an amusement park, but something in between. I think it would be incredible to do huge outdoor sculptures that create an environment that people can explore.

What can we expect from you next? One of the things that we’re working on at the moment is large-scale forms—like a cave or a sort of environment that you can walk through where the surfaces around you are woven and contoured.