This Is How a Former IKEA Designer Decorates With Vintage Items

No, her home does not look like a showroom. 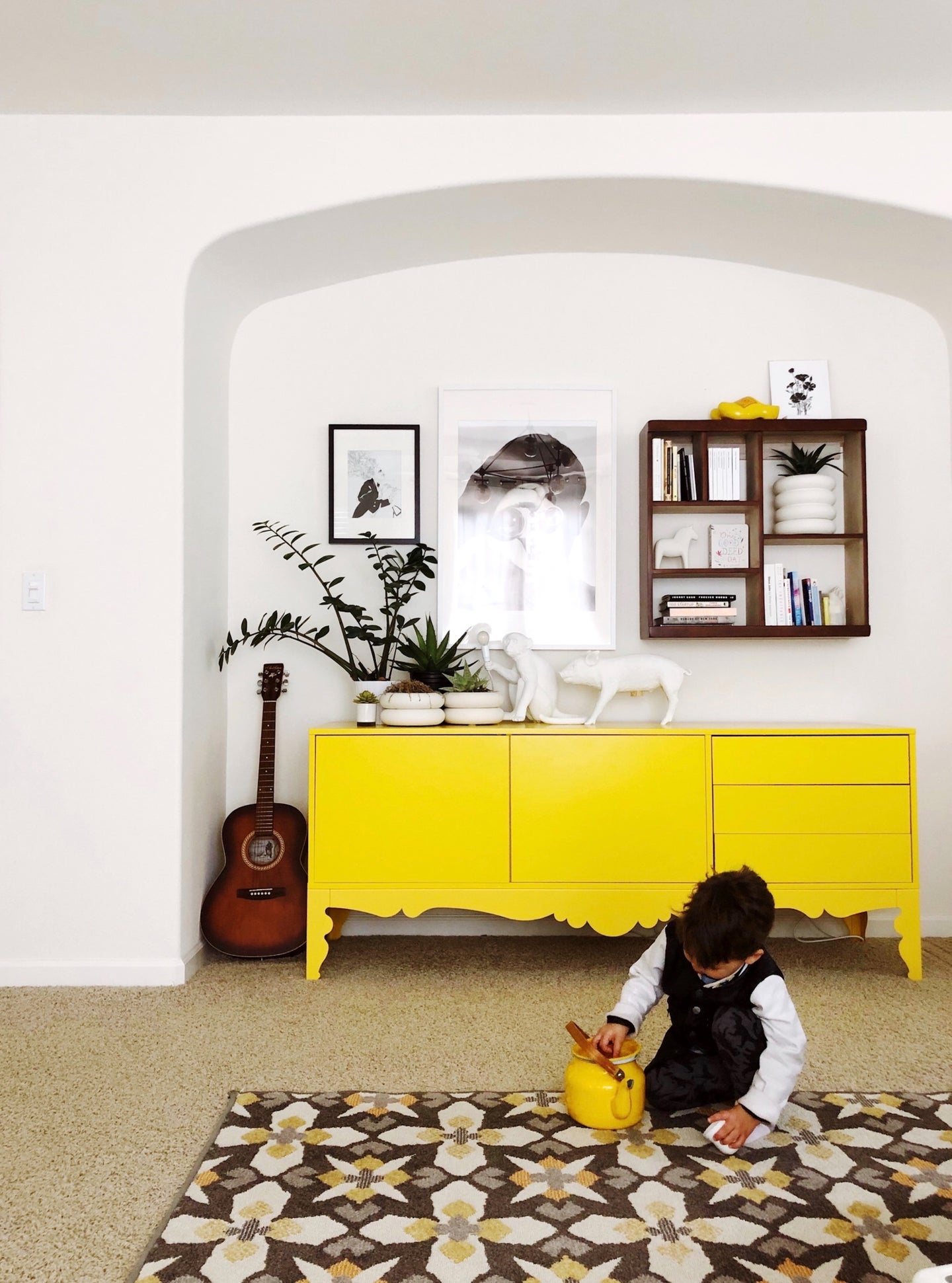 Miquela Raiche has held not one but two of our dream jobs. Before establishing her own online vintage shop, Great Honour Goods, the Alberta native spent the better part of her 20s working for IKEA as an interior design manager. In the middle of mastering the Scandinavian-modern way, Raiche learned a lot about designing a well-loved home. She even learned a lot about falling in love.

“I actually met my husband there,” she laughs. “It was amazing growing up in that culture. I think that’s why there are a lot of IKEA love stories. You have similar values: Simplicity, humbleness, togetherness… core Swedish cultural things that my husband and I carry with us and that bleed into the design of a home.”

After a number of years working at one of the Toronto stores (she was the one in charge of decorating the perfectly assembled rooms that make shopping at IKEA utterly addictive), Raiche and her family moved to California where she would turn her longtime love of thrifting into a full-on business. “For as long as I can remember, even as a child, I’ve always been fascinated with objects from a different time,” shares Raiche.

While certainly a departure from her IKEA days, Raiche’s curated eye lent itself to buying and selling vintage goods. Ahead, the serial vintage shopper shares her takeaways for shopping storied objects, spotting a good deal, and finding a balance between the past and the present.

From topaz-colored wine glasses and hanging calendar plates to brass duck bookends and ceramic table lamps, Raiche has stocked her online store with items she’s carefully sourced from local antique stores, faraway flea markets, estate sales, and online auctions. When the Canadian-turned-Californian first decided to open her own store a little over a year ago, she began to establish contacts that knew the ins and outs of the auction world.

“I found a guy here in the city. He sort of knows me now and understands what I’m looking out for, so I’ll get emails from him now and then to check in on what’s online,” says Raiche. “I’ve been to estate sales and auctions where you’re like, ‘Wow these people had amazing style’ and you can get a decent amount of stuff from one of those sales. But sometimes they’re just kind of a bust. That’s all part of the fun.”

Get Acquainted with Brandings

While some vintage shoppers like to go out with a predetermined list of items, an agenda isn’t always necessary. What is necessary? Your phone. “Before I buy anything, I research and make sure I know it’s an authentic piece,” suggests Raiche. “Even when I’m in a shop, I’ll pull out my phone to figure out if it’s something I want to sell.”

Over time, Raiche has taught herself to identify and verify logos, signatures, or other markings that discreetly hide on objects. Luckily, she suggests you can figure out a piece’s authenticity and worth through a quick Google search.

advertisement
“Before I buy anything, I research and make sure I know it’s an authentic piece.”

“What’s kind of more challenging now is that there are so many new companies that are making stuff that looks vintage,” she continues. “You can go into something and go, ‘This looks like a great mid-century-modern piece,’ and then you pick it up and it has a Target sticker. You have to be really careful. Now I know which brands to look for and what logos are from what year.”

Invest in Items That You Love

The charming chalk drawing of an old man (circa 1954) that now sits on Raiche’s living room mantel was neither a calculated steal or memorable bargain. Resale had nothing to do with it—she was simply drawn to the drawing.

Shop the Eras That Speak to You

While Raiche is no stranger to antique shops, you won’t find Victorian trinkets lingering around her home. Instead, she shops for the items she naturally gravitates toward, which tend to fall between the 1940s and late 1970s. “It’s what I’m personally drawn to and what I think people are looking for, especially when it comes to authentic pieces from that era,” shares Raiche.

Her approach to vintage shopping has been largely shaped by both sets of her grandparents—one of which filled their lakeside cottage with vintage records, artwork, and other hidden gems, while the other pair adhered to a tightly curated decorating approach.

“I love the blend between the two of those things, taking the treasure-hunting side and really curating it down to the pieces you love,” says Raiche. The retro record player and old Reader’s Digest pages that can be found in her living room serves as an homage to her grandparents who lived on the water.

“Honestly, if there was a fire in my house, this would be the one thing I would come in and try to save,” she says of the record player. “It reminds me of them, but I also just love it from a design point of view.”

advertisement
“I love the blend between the two of those things, taking the treasure-hunting side and really curating it down to the pieces you love.”

Balance the Old with the New

Anyone who loves revamping old stuff with a touch of paint is bound to admire the electric yellow dresser that sits in Raiche’s master bedroom… except for the fact that it isn’t vintage at all. “I wish this piece had a better story behind it. It’s what I’m going to call ‘vintage IKEA,’” she laughs.

Raiche’s husband, who was particularly enamored with the chest’s unique color, picked up the piece from a limited edition IKEA line 10 years ago. This blended marriage of real antique items and not-so-real vintage finds keeps the spark alive in their home.

“Our house is a mix of new stuff, old stuff, stuff with stories, and stuff that doesn’t have stories,” she says. “It should be personal. It shouldn’t feel like a showroom.”

While IKEA’s values and work culture have made a lasting impression, Raiche also walked away with a bank of design lessons—like creating a livable space that meets your everyday needs before your aesthetic wants.

“A lot of people don’t know this, but behind each of those room settings at IKEA is an entire work brief about the family that lives there: what they do for a living, what functions they need, what solutions they need, and what they do on the weekend,” shares Raiche. “It’s really intentional.”

“Our house is a mix of new stuff, old stuff, stuff with stories, and stuff that doesn’t have stories.”

As a result, Raiche is careful about how much stuff she brings into her home. If she doesn’t think it will better the way her family of four (soon to be five) functions on a day-to-day basis, it stays at the flea market.

“It’s not just about what looks good,” she adds. “I think it’s helped me organize our space and create solutions to problems that all people live with.”

See more stories like this:  4 Serial Vintage Shoppers Share Their Best-Ever Bargain—and How They Negotiated The 9 Vintage Shopping Mistakes Everyone Makes Tour the Vintage-Filled Home of the Twin Peaks Costume Designer