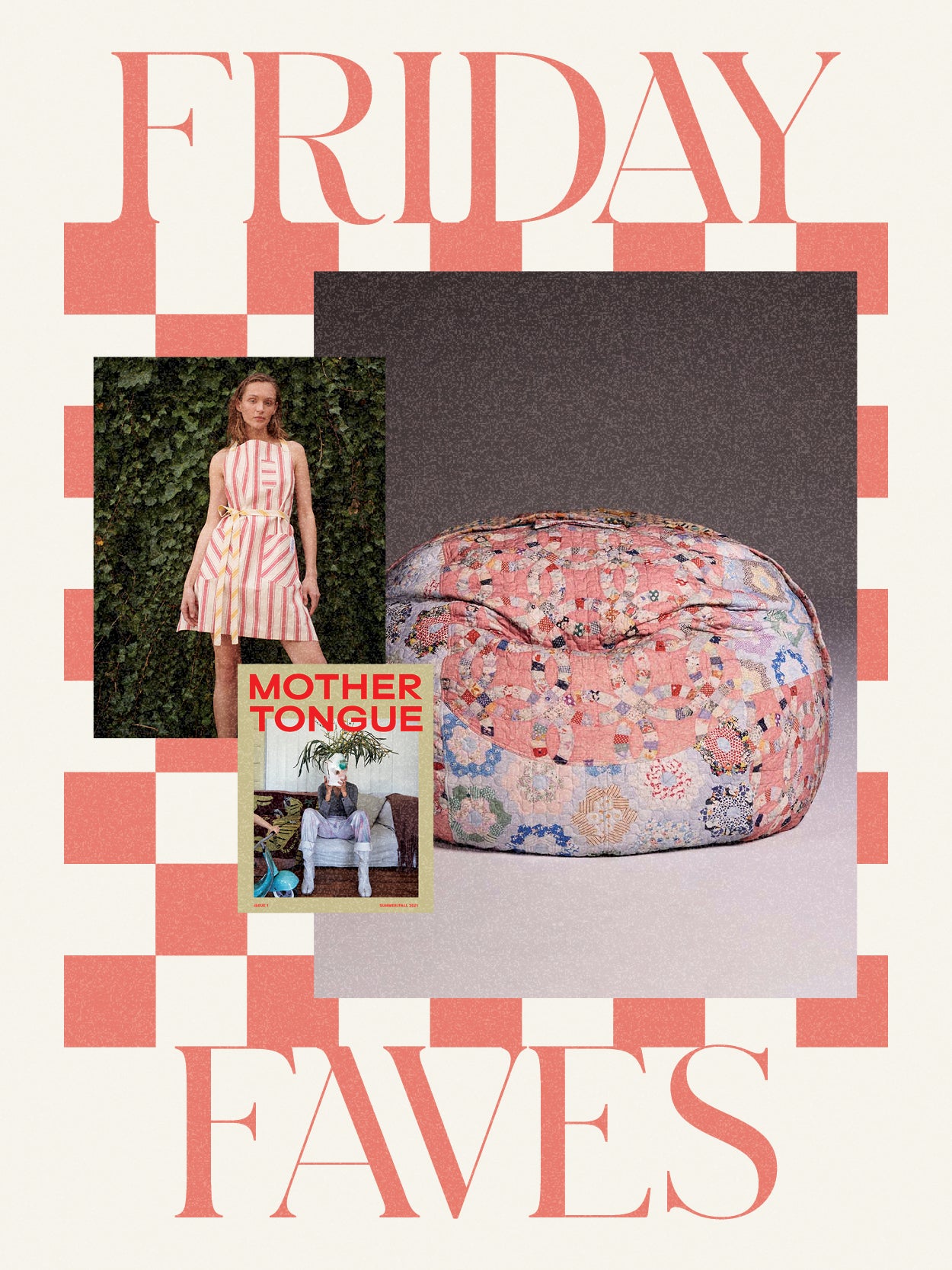 Our days are punctuated by scouting new talent, attending market appointments, and scrolling Instagram in an effort to unearth the products, people, and news you actually need to know. Here’s what we Slacked one another about this week.

Oh, to be a mom in this flat circle of pandemic time. As Mother Tongue—a fabulous and necessary new magazine that explores modern motherhood—notes, “Much of the media that is meant to speak to moms is actually about children. Compelling as they can be, there’s often a lot more to the story.” And so founding editors Melissa Goldstein and Natalia Rachlin offer a frank and groovy escape into the complex world of mom-dom. From a CBD/THC cheat sheet to a photo essay on aging and female beauty perceptions to a profile of artist Hein Koh (whose smoking broccoli characters surely speak to the responsibility rebel in parents everywhere), there’s a lot of ground to explore—including work by Domino contributors Magdalena Wosinska, Julia Sherman, and our very own Kate Berry. But really, flipping through the pages and “listening” to a roundtable chat on things like family-life boundaries and (solo!) travel fantasies is about the closest thing to hanging out that many of us have been able to enjoy in a long while. Just as filmmaker Priyanka Mattoo muses as part of that convo, “Going anywhere but my house would be nice. We could do a house swap. Just exchange lives for, like, two seconds.” Who’s in? —Alex Redgrave, executive editor

Cocoa for a Cause: Casa Bosques’s The Makers Series

In my house, it’s very important to have a bar of dark chocolate on hand in case of post-dinner sugar-craving emergencies. And if it’s not from the bodega, that’s always a plus. Chic chocolatier Casa Bosques just launched the Makers Series, serving anything but corner-store vibes. Conceived by Designer Rafael de Cárdenas in collaboration with DeVonn Francis, founder of Yardy World, velvety bars in flavors like bay leaf and chamomile flower are drawn from his Jamaican heritage and boxed in packaging special enough to frame. Really, though, they highlight works from artists Mary L. Bennett, Joe Light, and Ronald Lockett. While $22 per bar may feel like a splurge, your money is going toward a good cause; 100 percent of profits benefit the Okra Project, a nonprofit dedicated to bringing healthy, home-cooked meals to Black trans individuals worldwide. —Julia Stevens, associate style editor

I’ve always liked the idea of collecting modern heirlooms—really well-made pieces with a clear design perspective that feel of the moment but that you’ll want to hang onto for the long haul. However, now that I have a daughter, this idea resonates even more strongly. Enter: the Paths Blanket—a collaboration between heritage brand Pendleton Pendleton (seriously, the company has been around for more than 150 years) and relatively up-and-coming bedding brand Brooklinen. It’s woven in the U.S. from wool and cotton and has an asymmetrical geometric pattern that nods to Pendleton’s iconic designs, but with a more contemporary, graphic spin. —Cat Dash, contributing editor

I’ve been a fan of Caroline Z. Hurley’s block-printed fabrics for a long time; the geometric patterns just make me happy. When I heard that she released another collection with Schumacher, I was immediately sold. Her new floral fabric, Meadow Rock, takes the block-printing grid and flips it by having each of the flowers hand-painted instead. You get the neatness of the rows but the organic feeling of the brushstrokes—it’s the best of both worlds. Not to mention it’s printed on linen, so it works for everything from curtains to throw pillows. —Kate McGregor, associate design editor

When I bake, I like my outfit to be as measured as my flour, and in Rosie Assoulin’s new striped apron, I feel like I could be the host of my own very chic cooking show on a premium network. (Watch out, Ina!) The only problem is that it’s so beautiful—peep the version with flower appliqués—that I’m worried about getting it dirty. Thankfully my new dessert obsession, Brutus Bakeshop’s Miso Chocolate Chip Cookie Dough, doesn’t involve any mixing or stirring. Now what network is going to buy my baking show? —Julie Vadnal, deputy editor

Forget what you know about beanbags—this fresh collab between Lovesac and American fashion designer Jeremy Scott is certifiably chic. A friend turned me on to it while I was prepping for a shoot at her home, so obviously we got a quilted SuperSac to photograph. It’s so massive that it’s more like a free-form love seat, so you’ll want to ensure you have the space for it. And just like Scott himself, it’s guaranteed to make a statement. —Kate Berry, chief content officer