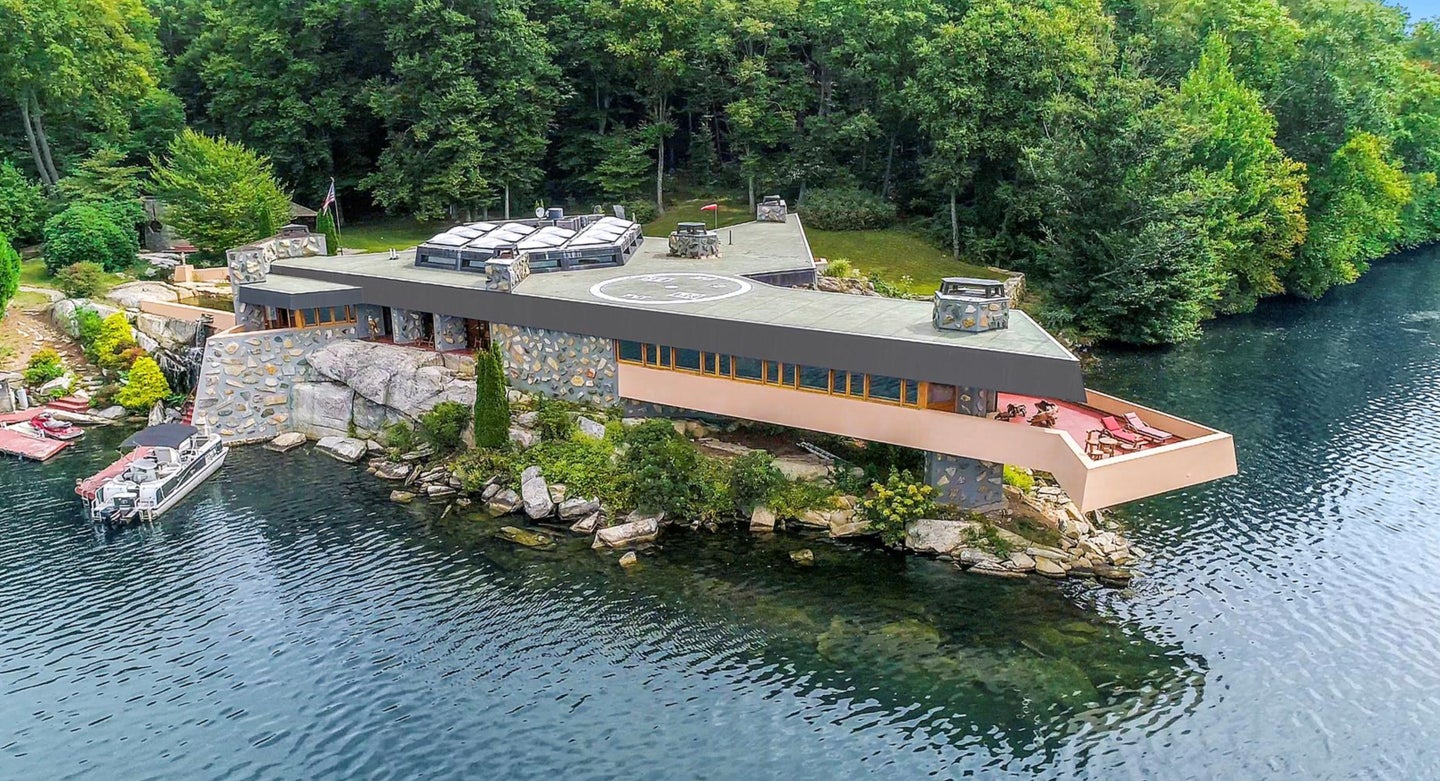 It’s astounding just how much you can discover after a short drive out of New York City. The Finger Lakes and Ferncliff Forest are just two hidden gems on our list of day trips. Our latest nearby find? A private island that boasts not one but two homes designed by American architect and interior designer Frank Lloyd Wright. After years of being on and off the market, the two-for-one package is officially available again for a cool $12.9 million.

Situated just 50 miles north of NYC, Petra Island (also called Petre Island) is the ultimate source of escape for the design lover. Backed by a justifiable price tag, the property encompasses a small guest house (built in the 1950s) and a four-bedroom residence cantilevered over Lake Mahopac. While the architectural marvel is primed for privacy, the island has also been a been a point of controversy for FLW purists.

According to Designboom, the Frank Lloyd Wright Foundation has yet to recognize one of the homes as an original Wright design. The plans for the primary residence were reportedly drawn up by the famed architect in 1949 but weren’t executed until 2007 by a later owner who enlisted the help of a Wright scholar to bring the plans to life. Despite the fact that the house remains uncertified, we can’t help but geek out over the architecture. Just see for yourself.

While the main residence wasn’t constructed until 2007, certain details—like the horizontal planes and built-in furniture—will look decidedly familiar to fans of Wright’s work. Of course, the real stamp of approval is evident in the home’s connectedness to the outdoors.

In true Wright fashion, indoor-outdoor flow takes the form of panoramic glass windows, large interior boulders (you’ll find them in the kitchen and master bath), and a sweeping lakeside deck. There’s also a tea house and beach dock on the property Oh, and a helipad. Don’t worry: Your private pilot can rest easy in the nearby guest house.

For the mid-century-modern fiends among us who don’t have $12 million (and some change) to spare, bring a taste of the past into your own homes with these vintage-inspired finds.

FYI: Mobiles aren’t just for nurseries. Hang this retro sculpture in an empty hallway for an eye-catching effect.

Jonathan Adler’s collection for Amazon, Now House, is brimming with affordable home decor gems. Embrace mod in the bedroom or on the living room sofa with this dotted throw pillow.

It’s no secret that Palm Springs is a hotbed for mid-century marvels. Can’t afford your own? This print may be the next best thing.

This Window-Filled Frank Lloyd Wright Masterpiece Can Be Your Home

An Inside Look at Home Decor Through the Decades