The Best Place to Find Design Inspiration Might Be the Gym

Fitness studios are shaping up. 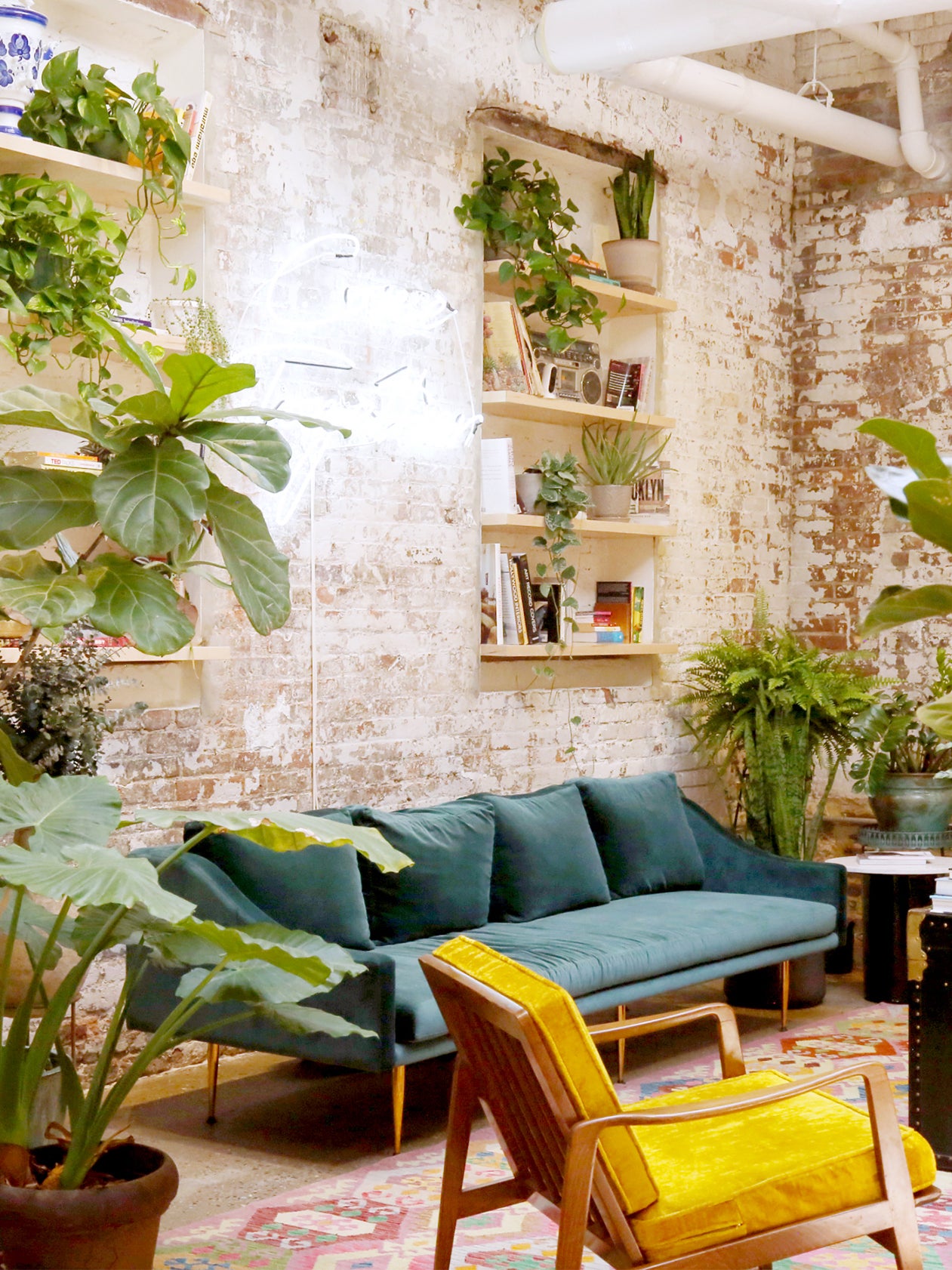 A gym is a gym is a gym. Stainless-steel equipment, harsh lighting, and lots of gray and black, perhaps with a pop of garish orange or purple, is pretty much guaranteed. Lately, though, that’s been changing. Fitness spaces are starting to become one of the best places to get design inspiration—and they don’t look like gyms at all.

We started to see the shift five years ago when Sky Ting yoga first opened in New York City’s Chinatown. The studio was bright and clean, with a hodgepodge of plants and a stuffed animal giraffe that skirted the ceiling (stuffed animals would become a motif in the company’s following two locations as well). It’s not surprising that it grew a cult following—in addition to contemporary playlists, Sky Ting offered a different kind of yoga experience altogether.

“All the studios that existed before us were very crunchy or seemed stale. There had become this clichéd idea for how a yoga studio should look: lotus flowers drawn on the wall, dark purple drapes, teal mats and yellow walls, Sanskrit letters or quotes, and large Indian statutes,” says cofounder and architectural designer Nick Poe. “We wanted to make a studio that was way more simple, clean, sun-filled, and just more New York.”

Now, Sky Ting has three locations and several other fitness spaces have followed the brand’s prescription for a workout spot that actually makes you want to work out: Give it some of the comforts of home.

Goodtimes Yoga, a new studio in Williamsburg, Brooklyn, echoes this sentiment. “I wanted it to feel like someone’s apartment, a place that feels safe and cozy,” says founder Karina Kay, who designed the loft-like location with no previous experience. “Most of us are crammed in tiny New York rentals, and it’s such a treat to be able to spend time in airy, beautiful spaces. Your yoga studio is your second home—it is your community and support.”

There might not be anything inherently alluring about stainless steel and fluorescent lighting that you’d find in a traditional gym setting—but soft textiles, curved architecture, and terra-cotta tones? Now that’s what we’d consider a warm welcome.

This is precisely what Jules Bakshi, founder of Brooklyn dance-based studio Good Move, had in mind when she collaborated with Eleni Petaloti of LOT Architects to design her studio. “One of the greatest barriers to entry for people thinking about taking a dance class is intimidation, so I was very conscious about making the space feel inclusive and inviting in as many ways as possible,” she says. “I knew I wanted the physical location to feel earthy and energetic—a place to celebrate movement and bodies. I had been putting together mood boards for months and finally described the look I wanted as 1970s Mediterranean.”

The result for all these studios? A place where the barrier to entry is automatically lowered, exercise is something to look forward to, and, yes, guests also get the additional motivation and, yes, lots of Instagram fodder. Now, if you’re searching for some inspiration, look no further than these other high-design fitness destinations.

Since its inception, Pop Physique has been all about making often serious barre class more playful with its vibrant, wallpapered studios. Add in good music and those pliés suddenly feel fun.

When Taryn Toomey first opened The Class, she worked with The Cristalline to install crystals directly into the floorboards—talk about good vibrations. That metaphysical touch combined with an all-white, minimalist design scheme makes for a serene escape that will happen to leave you toned.

Leave it to Sasha Bikoff to create the perfect Miami Vice–meets-Memphis space for 305 Fitness. Of course a disco ball would make you want to get your heart rate up in a club-inspired workout class.

When we say you can have your cake and eat it, too, we mean that you can get a great workout while also decompressing in a studio that Marie Antoinette would totally approve of. Thanks, Paris Pilates!

Dare we say we’re actually excited to work out?

See more inspiring design: The Best Way to Style This Cult-Favorite Lantern Painting Your Walls Freehand Is Incredibly Liberating This Fun Take on Floral Arrangements Embraces the Wild Side