Your fall fireplace inspiration, but with a patterned twist. 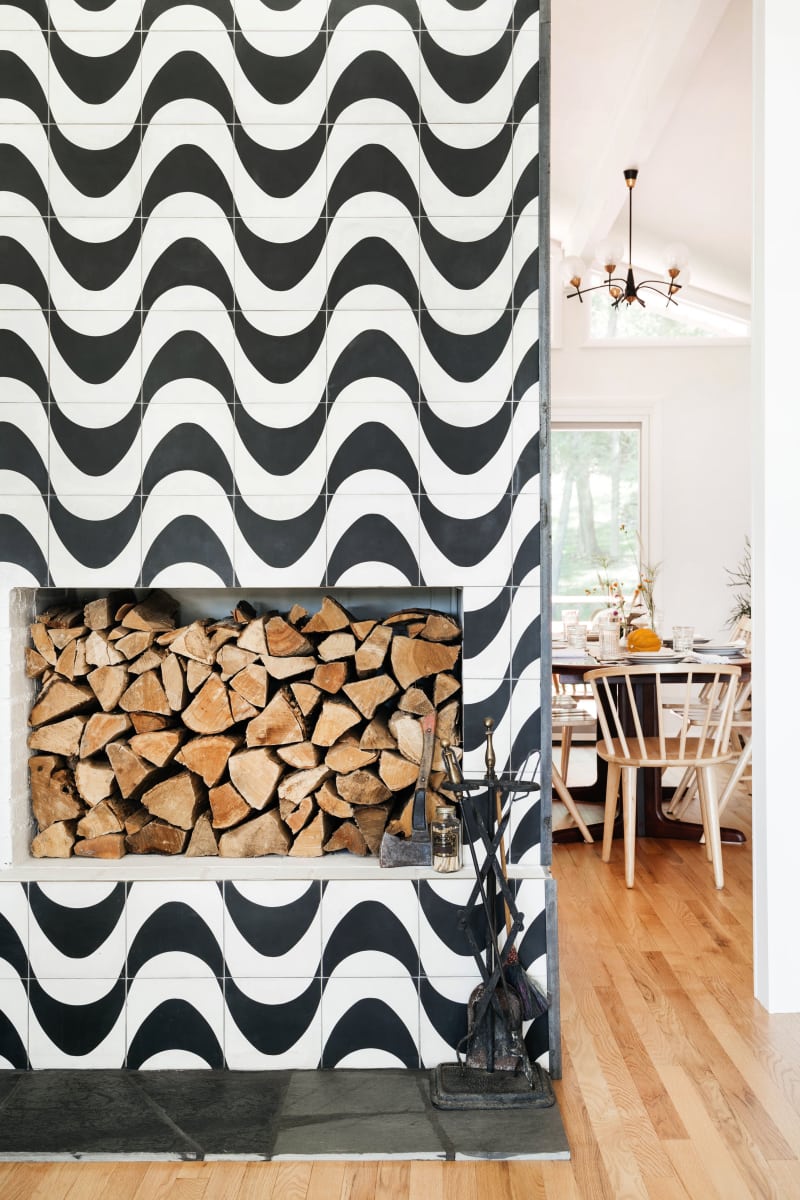 It’s hard to achieve true cozy, cold-weather ambiance without the company of a fireplace. Though, despite their primary purpose as an essential source of warmth, a hearth that fuels the fire simply just isn’t enough anymore. But a fireplace that brings the blaze and acts as an artful focal point for the rest of the room? Now, that’s a reason to gather.

For some fireplaces, it’s a dramatic mantel that captures the eye. In other cases, it’s an impressively minimal stone facade that wows. For those, like us, who crave texture and color on a daily—nay, hourly—basis, nothing quite compares to a fireplace masked in tile.

Whether swathed in a Moroccan-inspired cement or glazed in the most intriguing shade of green, we didn’t know the fireplace could get any cozier—that is, until now. Read on for the inspired takes on the tiled fireplace—plus, shoppable picks that let you steal the look for yourself!

Here’s one stunning reason to never let a non-functioning fireplace bring you down. To keep their hearth company, the owners of this restored mid-century modern abode in Newport Beach, CA placed a gathering of cacti under the comfort of the hood. Still swathed in the original Heath tile, this angular nook plays up the neutral scheme with gridded planes and an intricately patterned plateau.

Genie and Alex Lockwood’s historic Nashville home is an eclectic lesson in embracing color and decorating with art. In the living room, a two-toned tiling configuration earmarks the fireplace, where a friendly collection of items rest casually upon the mantel. The magic of this rich tiling display rests in the relationship between the glistening emerald tones along the outer edge and the darker green slabs on the floor.

Get the look: Copa Forest Glass Mosaic Tile, The Home Depot, $6.98 per sheet

Hanging a mirror above the mantel is certainly a part of standard non-working fireplace protocol. But camouflaging said lifeless spot in a sea of mirrors? Suddenly you’ve got a place dedicated to personal reflection. From a strictly visual standpoint, the glitzy facade of this high-glam fireplace is seriously eye-catching. However, in a room with few windows, a mirrored exterior like this will allow light to effortlessly bounce about the room.

Forgo a floor-to-ceiling display for a simplified outline. In this Cali-cool bachelor pad designed by Natalie Myers, a graphic punch of tile acts as a framing device in an open floor plan living room. While only a small splash, the same geometry that surrounds the fireplace is carried on throughout the room by way of art and textiles.

Get the look: Tortoise Shell, Fireclay Tile, $35 per piece

Talk about a focal point. In this bold home designed by the Vancouver-based firm MA+HG Architects, an inspired centerpiece with Moroccan flair steals the show. While the first few layers of this spectacularly tiled display find balance in a cohesive palette and harmonious patterns, the abrupt change of pace brought on by the glazed blue bottom instantly draws the eye to the blaze burning inside.

Get the look: Tanger C and RCEEF 18 from Mosaic House, price upon request; Ancient Sea, Cle Tile, $22.75 per square foot

With its wave-like composition, the inherent motion of the tile that covers the fireplace in this ’60s-inspired New York home (which boasts a bonus nook next to the actual firebox for storing wood) crafts a winning optical illusion. The psychedelic contrast between the black and white only furthers the sense of movement and helps to delineate it from the rest of the living space.

SoCal-based designer Lindye Galloway kicked the drama into high gear in this Huntington Beach home which boasts a stark black fireplace at its core. Given its high sheen and glossy squared tiles, this dark arrangement doesn’t feel nearly as moody as you’d guess. Floating shelves, fresh greenery, and an array of equally cozy textures complete the glamorous scene.

In an effort to play up this mid-century home’s architectural character, interior designer Karen Nepacena took a sleek, straightforward approach to the fireplace. Instead of staggering the tiles, she placed the thin bricks in a straight line, thus creating a captivating grid-like composition that wows the minute you walk through the front door.

Get the look: Sky Blue, Heath Ceramics, $38 per square foot

Shag Rug Love: Fringy Finds For Every Type of Budget

Our Editors Can’t Do Fall Without These Essential Staples