We've reached a new low. But, in a good way. 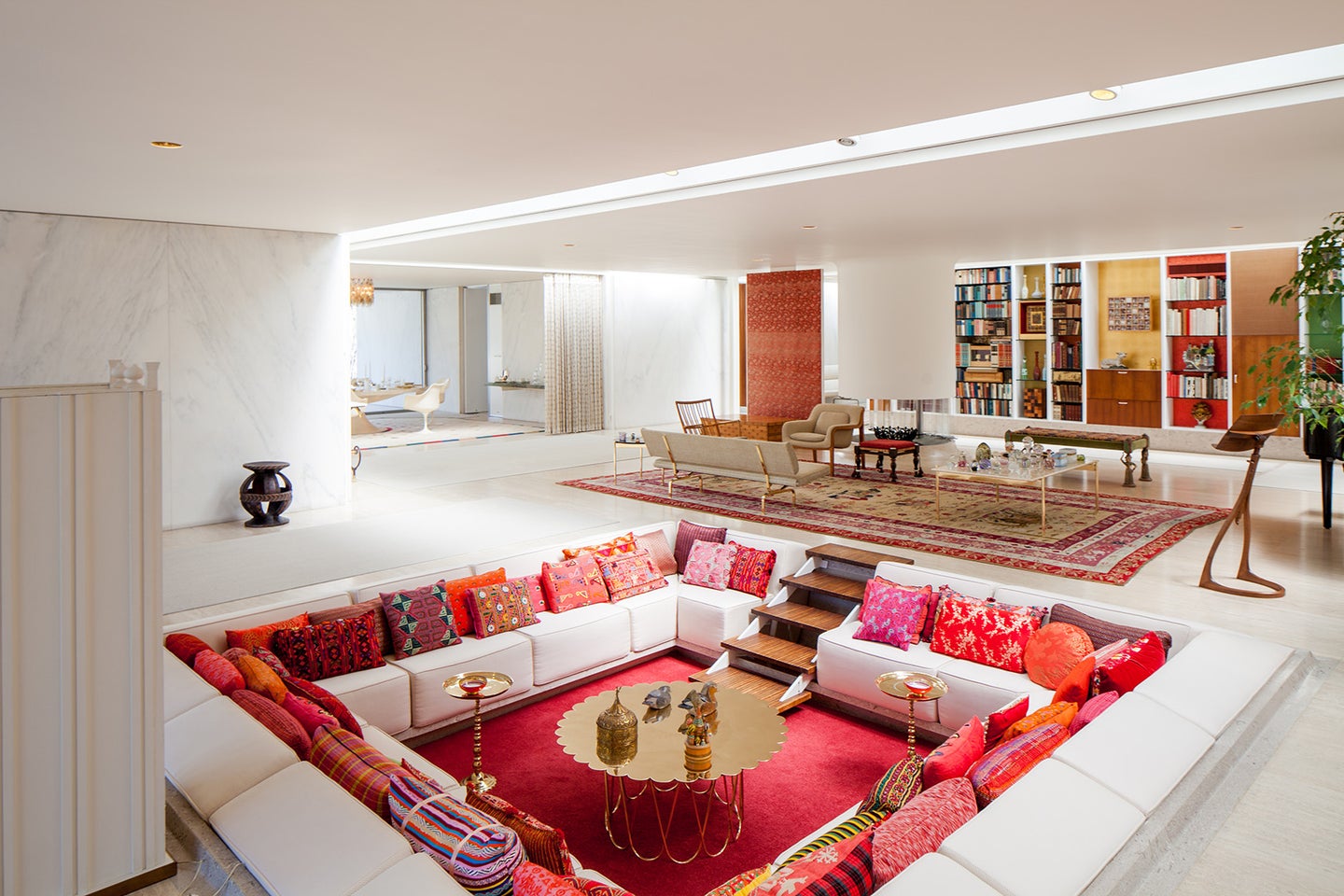 As with the return of any throwback trend, you’re bound to have a few hits and misses—particularly, when you’re dealing with the ’60s and ’70s. With the grooviest era officially upon us, kitschy fads have been experiencing a second wind not only in the world of fashion, but also in the realm of interiors. One dated trend designers told us they expect to see on the rebound? Sunken living rooms.

Also called conversation pits, these plunge-worthy layouts live up to their lowly name. A staple of the 1960s and 1970s, sunken living rooms offered a way to demarcate a separate sitting zone without having to put up walls, while also creating an intimate atmosphere for small groups. Sure, taking a step down into your living room might seem like an unconventional way to relax in your own home to us now, but when bordered by a cozy built-in sofa and topped with cushy pillows, it’s the ultimate spot to zen out.

In celebration of these glorified sinkholes (and, with the secret hope that they do, in fact, make their expected second debut) we scoured the web for nine contemporary interpretations and stylish reinventions of this iconic living room moment.

Before we dive deep into our favorite cave-like spaces, we can’t talk about sunken living rooms without first mentioning the most iconic seating arrangement of them all. Designed by Eero Saarinen and Alexander Girard in 1957 for the Miller House in Columbus, IN, this pillowy surprise is perhaps the most legendary layout of all time. Consider this one exceptionally stunning reason to never expose the back of your sofa again.

While swathed in a dreamy emerald green velvet, this modern iteration at The Wing’s Dumbo location in NYC appears to pay direct homage to the Miller House. The beauty of this luxe-looking set up isn’t just the two-toned fabric or industrial-chic coffee table (a central table or surface brings both meaning and function to these sunken spaces), but how many people you can actually pile in.

When surrounded by sculptural forms and new materials, a sunken living room can feel decidedly current. While wood paneling also happens to be a fad from the same era, clean lines, harmonious neutrals, and blank space—two ruling elements that have come to define this ultra-contemporary home by StudioEzra—will give a room a forward-thinking edge.

So far, each living room we’ve shared has been privy to ample square footage. However, one common misconception about sunken living rooms is that you have to have enough space for one. As this L-shaped display so effortlessly proves, these hallowed holes can bring their ease and charm to tinier living areas as well. As if you needed another reason to descend the stairs, here, guests are also encouraged to huddle around the fireplace. Talk about a stairway to heaven.

Plush upholstery and fringy throw pillows are great when you want to amp up the warmth. But what about when your style tends toward chilly? Picking up on the same tones as the concrete ledge it sits upon, this sleek, industrial recreation offers a refreshing and modern take on what can be considered an archaic craze. Between the adjacent dining room and floor-to-ceiling bookcase, every element within the room plays up verticality, thereby creating a visually striking scene based on varying levels.

Don’t want to go so deep? When executed properly, a simple built-in sofa can mimic the look and feel of a cozy, cave-like niche. For actress Mandy Moore’s retro spread, interior designer Sarah Sherman Samuel opted for a short and sweet version in the hallway leading to the master bedroom. We love how the golden mustard tones also make a subtle reference to mid-century design.

For this calm and composed home in Scarsdale, NY, design firm Barsanti Desmone set the tone for a serene, upstate escape by including a secondary sitting area snuggled by the stairs. Unexpected details—like the giant lantern, large-scale art, and amalgamation of geometric tables—extend an added sense of sophistication.

With room for everyone in your extended family (and then some), this creamy, comfy spot designed by Brazilian architect Isay Weinfeld is a living room dream come true. Although mammoth-sized sofa may not sink as deep as we might like, the rich wood tones and organic natural palette make up for the soothing vibes that a deeper burrow would ultimately create.

Not too large and not too small, the main living room at Amileka Byron Bay, a luxury home rental in Australia, strikes the perfect balance. Backed by a series of sliding glass doors, this attainable arrangement (which features a series of steps down and a high-profile back) is a much-welcomed reminder that sunken spaces look best when set against a backdrop of warm, natural light.

The One Piece Your Living Room Is Craving

How to Bring Fall’s Trendiest Colors to Your Living Room