Every Room In This New York House Has a Different Personality

But the bold styles come together effortlessly. 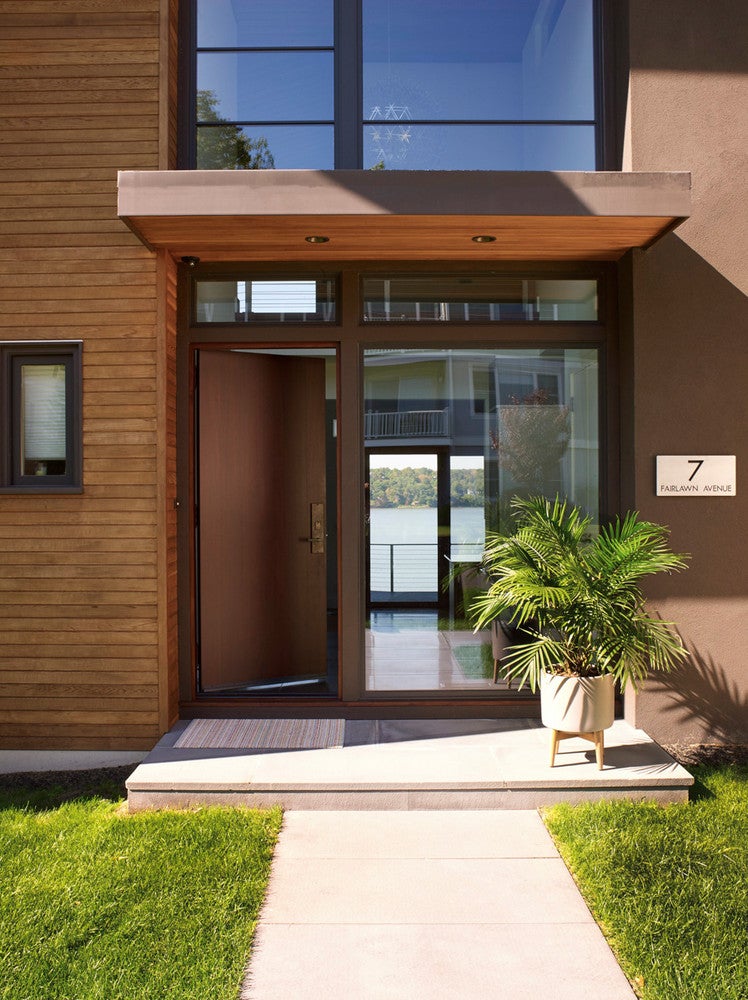 For interior designer and founder of D2 Interieurs Denise Davies, the biggest challenge when designing a new home for a young family that moved from Brooklyn to the suburbs meant exploring what she called “a balancing act.”

“The clients are lovers of color,” says Davies. “Because of the open floor plan, the color palette had to work together without being monotonous. But the couple also wanted wanted a fun, yet sophisticated aesthetic where they could entertain, but their kids should feel comfortable in the space—and of course, enjoy that incredible view.”

Located in Dobbs Ferry in New York’s Westchester County, the home has sweeping views of the Hudson River and floor-to-ceiling windows that let light in throughout the space. The issue for the designer’s goal was to incorporate both a warm and inviting feel where the parents could entertain, along with more family-friendly elements.

The newly constructed home had a mid-century feel due to the streamlined shape of the architecture, and modern elements were added to enhance the clean lines and create a cohesive look. In the living room, a floral-inspired lighting fixture and wood aspects lend a nature-inspired feel, thus allowing your attention to turn to the outdoors.

“Since the client did not want conventional window treatments, I needed to warm up the home. I incorporated wood accents, but was very conscious not to compete with the gorgeous floors,” says Davies. “The colors all correspond to nature and do not compete with the outdoors in any way.” Modern furniture, with pops of blush pink and deep blues, add to the warmth.

A key piece of Davies’s design aesthetic is the custom rugs she designs for every new client, as she believes the patterns and colors in a room can really be drawn out by a chic, sophisticated rug. In the living area, an ombre rug with hints of blue and indigo is then punctuated by a dark blue velvet sofa and metal accents.

“I just love the pop of the blush chairs peeking through,” says Davies. “It tells you that this house doesn’t take itself too seriously.”

A blackened wood fireplace enhances the mix of rustic and modern the home is going for. A favorite of Davies, it truly exemplifies her look: “I am known for mixing many different styles,” she says. “And the fireplace really stands on its own as a work of art—a few key accessories were all that was needed.”

“I am constantly on the search for unique vintage furniture and objects to use in my projects, and am busting out of my warehouse because I can’t part with anything,” she says. By taking color tones in her rugs and incorporating them throughout the space, she creates a cohesive look, despite the multitude of colors throughout the home.

For Davies, the most fun came from giving each room in the house a different look and feel, while staying true to her primary purpose of letting the views speak for themselves. In the kitchen, she went with a nod to mid-century design, adding natural woods and neutrals to the space for an organic feel.

“The home has three views of the Hudson River, and is very sunny and bright most of the day,” she explains. “Every color and wood tone had to be spot on. Because of the amazing view and all the natural light, I decided that less is more when it came to furniture selection, as not to detract from the outside and nature.”

with a built-in bench was created beside a large picture window, while the hanging light serves double duty as the reading light in the adjacent family room.

“A modern white kitchen would have been so wrong in this space. Because of the open floor plan, it was important that the stools and the lighting flowed with the rest of the space,” explains Davies.

She continues with that vibe in the family room, where white walls, black accents, and fairly neutral furniture allow the views to speak for themselves—save a geometric-printed chair in the same color tone.

A huge challenge for this family of five was storage. Built-in shelving in the family room, a multitude of cabinets in the kitchen, and chic storage elements like dressers and storage bins are discreetly placed throughout.

But the real testament to Davies’s color magic is on the lower level of the home, which serves as both an additional guest area and a play area for the kids: an entire colorful wall of built-ins consists of 32 hues and spans 24 feet long, combining form and function in a way that’s signature Davies.

“The bottom is all deep drawers for toys, while the upper cabinets (all on touch latches) open up,” explains Davies. “All 32 colors were precisely chosen to work together in clusters of four colors, and I cut up an entire Benjamin Moore paint deck to get the perfect combination. This was, by far, one of the most challenging and satisfying things I have done as a designer, and a true test of my ability and knowledge of color.”

Other playful elements in the lower level include the all-white kitchen with pastel walls and an organic rug, as well as some colorful artwork. That little nook was artfully designed with two very different aesthetics in mind: “It’s used as an arts and crafts area by day, and a man cave/poker area by night, when the husband has the guys over,” explains Davies. “Originally we had pink, green, and white chairs, but we switched out the pink as it was not conducive to six guys sitting around smoking cigars, drinking scotch, and playing poker.”

In the master bedroom, Davies wanted to create a serene, peaceful environment, especially since the mother uses the space for her yoga practice. “Minimal yet warm was what I was going for,” says Davies. “It was all about bringing the outside in and not competing with nature. The fabrics are all very textural, as is the silk rug which adds all the warmth.”

She got to play more in the children’s rooms, as they were the most inclined to mix and match colors. “For the girl’s room, we used over 1,000 heart decals on her bed wall—and yes, my installer hates me,” says Davies. “She is truly a girly girl and wanted pink, so I took it to the next level with the neon colors. I also love the mismatched lamps—bunny is my favorite.”

In the boys’ room, a bunk bed made use of limited space, while the bedding, rugs, and wall decor all flow together for a playful take on a traditionally masculine hue.

By tapping into her clients’ love of color while added a refined modern twist, Davies was able to creates a home that is, in her words, “happy, colorful, and eclectic.”