A Dutch Colonial Gets a New Life in Charcoal and White

Blending modern and traditional, an old house is updated to become a family-friendly home. 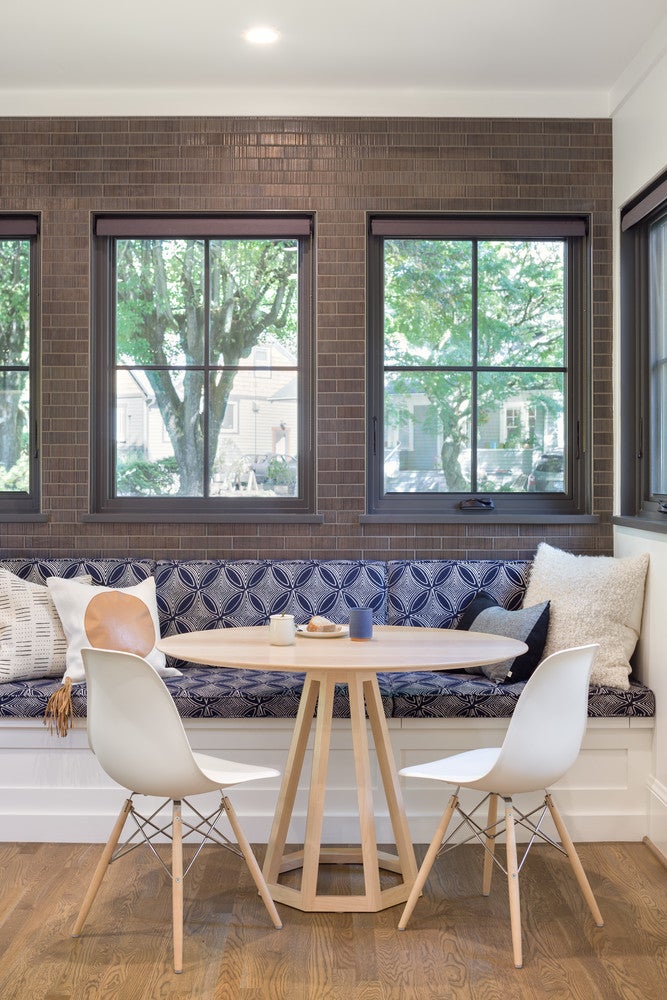 When this 1920s Dutch Colonial in Portland, Oregon, went up for sale, there was no way the cramped layout could accommodate modern family life. Take the kitchen, which was far from the hub of the home. “It was tucked into a dark corner of the house and had a view of the detached garage,” says Jenny Guggenheim, interior designer and co-founder of Guggenheim Architecture and Design Studio with husband, architect Jeff Guggenheim.

Not only that—many rooms possessed dated fixtures and finishes of past remodels. The Guggenheims paired up with Birdsmouth Construction to help the new homeowners reinvigorate the old house, affectionately dubbing it the “Dutchie” during the process. Their goal was to mesh the home’s historical character with a more modern aesthetic that suited family living. “The home felt very dark and uninviting before,” says Guggenheim. “Fresh and bright was the name of the game for this project. We wanted to give a nod to a contemporary sensibility without departing so far that it didn’t feel right for the era of the home.”

Let’s take a look at how they struck that balance:

The team completely reconfigured the once cramped and steep stairway into a striking focal point upon entry. “It was important to us that the stairs be a feature when you first walk in,” says Guggenheim.

Since all the woodwork had a dark pickled finish that wasn’t original, Guggenheim swapped it out for a timeless charcoal and white combo throughout. Doors and windows were painted with Benjamin Moore’s Iron Mountain, while the casework, trim, and walls were painted Simply White. “We painted out all the trims and moldings to match the walls, so that they really just became more of a texture in the space rather than an emphasized element,” says Guggenheim.

A streamlined, custom railing designed by the Guggenheims reads both modern and traditional. “We really tried to keep the permanent elements similar to what you would have found in the original home design,” Guggenheim says. An indoor/outdoor herringbone rug from Dash & Albert is a durable, kid-friendly stair runner.

The former kitchen had little natural light and cut the cook off from the rest of the house. “There was no connection to any adjacent rooms,” says Guggenheim. “It was really stuck behind a single 2×6 foot wide door.” The fixtures and finishes from the early 2000s also didn’t suit the Dutch Colonial.

First, the Guggenheims relocated the kitchen next to the living room by incorporating a small addition. In doing so, they made sure to “maintain the essence of the traditional proportions on the exterior,” Guggenheim says. Then, they created a conservatory vibe with two walls of windows. “Really, the focus in this room is the beautiful windows and the connection to the yard,” says Guggenheim. “It was important to the clients that they could be in the kitchen working and be able to see their children playing outside.”

Guggenheim inverted the charcoal and white scheme in the room by using dark wall tiles. “We went dark for just a touch of the unexpected,” she says. “It also anchors that wall and highlights the windows.”

The contemporary striated Ann Sacks Savoy tile contrasts nicely with time-honored Shaker-style cabinetry. “What’s cool about this tile is that it gives off this brick effect, so it feels like part of a 1920s home but puts a modern spin on it,” says Guggenheim.

gets a refresh via a custom maple dining table designed by the Guggenheims and fabricated by local woodworker Tretiak Works. Eames chairs withstand messy meals, as does the DwellStudio outdoor fabric on the banquette. “The clients don’t need to worry about sun-fading or staining,” says Guggenheim. Handmade pillows dial up the coziness.

A brand new, galley-style butler’s pantry between the kitchen and entry references the Dutchie’s roots and performs as a storage powerhouse. Inside, closets stow coats and shoes, cabinets hide less-used kitchen gadgetry, and a Ceasarstone countertop acts as a drop zone. Says Guggenheim: “We were able to avoid upper cabinets in the kitchen because we designed this butler’s pantry.”

In the living room, the furniture is a medley of modern classics. Blu Dot’s Field Lounge Chair sits easy with a cowhide rug and a Saarinen side table. Guggenheim used the same discreet roman shades from the Shade Store throughout the first floor. “That helps unify the house,” she says.

For this uber-functional bathroom, clocking in at just 33 square-feet, Guggenheim sought to create an element of surprise. She contrasted traditional

with artful wallpaper from Pattern People for Hygge and West and a glam Cedar & Moss pendant, while staying true to her color theme. “That was a space we knew we could have a little more fun with,” she says.