Untouched for 50 Years, a California Spanish Colonial Is Revived 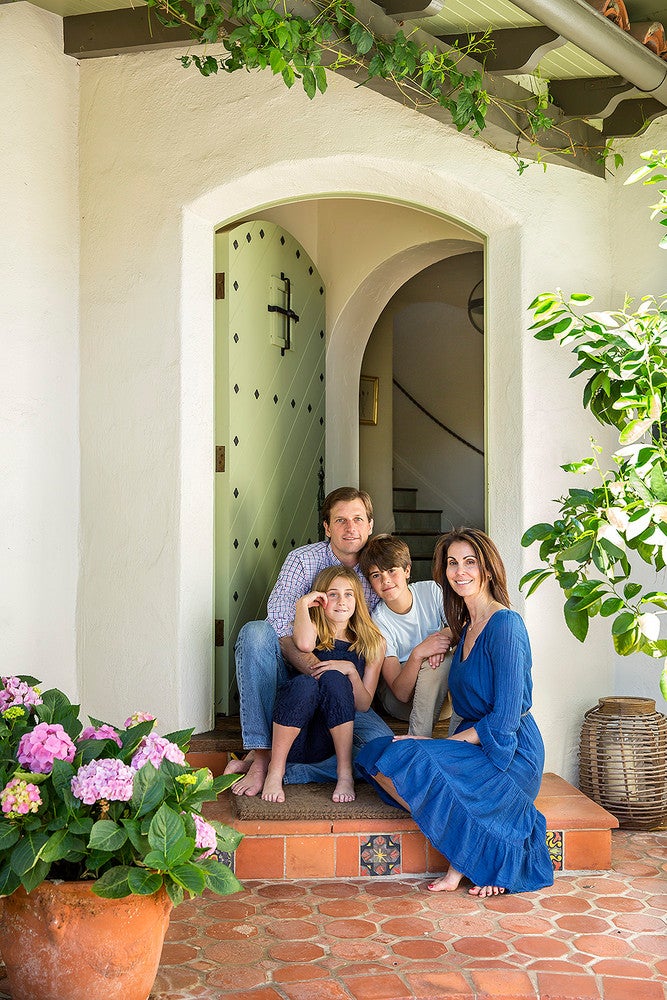 Interior designer Christine Markatos Lowe was thrilled to relocate to California with her husband and two kids. But in moving from Soho to Santa Monica, she knew the home had to have lots of heart and personality.She found it all in a classic 1928 two-story Spanish Colonial. Having been built for the second mayor of Santa Monica, it came with history, but it also came with a lot of dust, having not been touched for several decades. As the third proud owner, Markatos Lowe rolled up her sleeves and turned the home into the sparkling gem it once was.

“I wanted the house to retain its charming architectural character but be modernized for how we live today,” says Markatos Lowe, a busy mother of two.

Fortunately, most of the bones and character-building accents were intact, including original doors, hardware, wood beams, and terracotta tile in the courtyard and living room. Unfortunately, the last time the appliances and finishes had been updated was during a remodel half a century ago, so a few time-warp elements were intact as well.

“Since the property had not been renovated since it last sold in 1958 there was much updating to do,” Markatos Lowe says. “Even the kitchen ovens were original, it looked like the set of Mad Men. It was the perfect project for me.”

Aiming for bright, cheerful, and family-friendly, Markatos Lowe reconfigured the first floor to improve the flow of the house, gutting the kitchen, and reconfiguring spaces to open up to the “charismatic exterior.” The original

is now an open, airy space with views of the lush backyard. It’s a bright and welcoming space with durable, design-forward materials.

“I knew the over-scale chevron tile backsplash was going to be a major graphic feature that would set the tone for the aesthetic so I covered all the walls in it,” the designer says. “The island countertop is stainless steel, typical of 1920s kitchens when they were kept out of sight. It’s extremely practical and holds up to all sorts of use and abuse. Many art projects have been made on that island, and it still looks great.”

A nearby dining room was inspired by Brighton Pavilion in England—a mix of bamboo with pieces of regency mahogany. An original tray ceiling is accented with plaster wallpaper from Weitzner Limited while patterned curtains and a pink Madeleine Weinrib rug keep things from reading too formal.

Another trick Markatos Lowe uses to make rooms more playful is swapping sets of chairs—here 1920s blond reed wickers chairs from William Laman in Montecito mesh with green painted bamboo side chairs from Red Egg. “I love the casualness of mixing the styles,” she says.

More pink and green fill the mudroom, which was formerly the original

still covered in brown laminate flooring. The designer turned the space into a highly utilized landing pad for the kids’ sports and school stuff, incorporating an Oscar de la Renta pained cabinet and cheery John Robshaw fabric for the shade.

While a new stairwell and tiled powder room grace the entry, the living room is almost entirely original to the house. Markatos Lowe removed some of the “fussy details” that had been added to the original mantel and beams and streamlined the room, decorating with collected antiques. She added pair of French doors to open up to the garden, where the family often hosts Sunday brunch while the kids go wild on the trampoline.

Creating a family-friendly haven was probably most challenging upstairs where originally there was only one bathroom. “That was not going to work for us,” she says. Rethinking the entire floor, she added an extra bathroom and gutted the master bath.Keeping the vanity—inspired by a an antique carving she’d seen in a shop in Maine—the point of interest in the long, narrow space, the designer used a mixture of Busby Gilbert arabesque tile and a textured wall tile from Ann Sacks for added interest. “I love an all-white bathroom, and I love mixing textures with patterns especially when the palette is monochromatic.”

was found by the couple in Marrakech and Markatos Lowe used it as a jumping off point for the neutral cream and white palette throughout the master suite. Creamy curtains from Chelsea Editions have French knot floral embroidery, while a gallery wall displays Hugo Guinness drawings collected from John Derian in New York.

Soft blue and green textiles nod to the colors throughout the home from all the patterned tile to the enchanting climbing vines to the rustic, custom front door—inspired by Paloma Picasso’s house in Morocco and painted in a welcoming Benjamin Moore Dill Weed green.

“Nothing in the house is precious,” Markatos Lowe says. “The aesthetic is casual and child friendly, I used lots of printed linens, which look better as they age, and the wood pieces are vintage or antique so it works as they patina with use. The mess of life is a reality with a family and I do practice what I preach. Live with what you love and use it.”

A Colorful Rental Transformation That Will Make You Rethink Temporary Living  How Removing Interior Walls Completely Transformed a Boston Home This Eclectic, Colorful Home Was Once Completely Beige