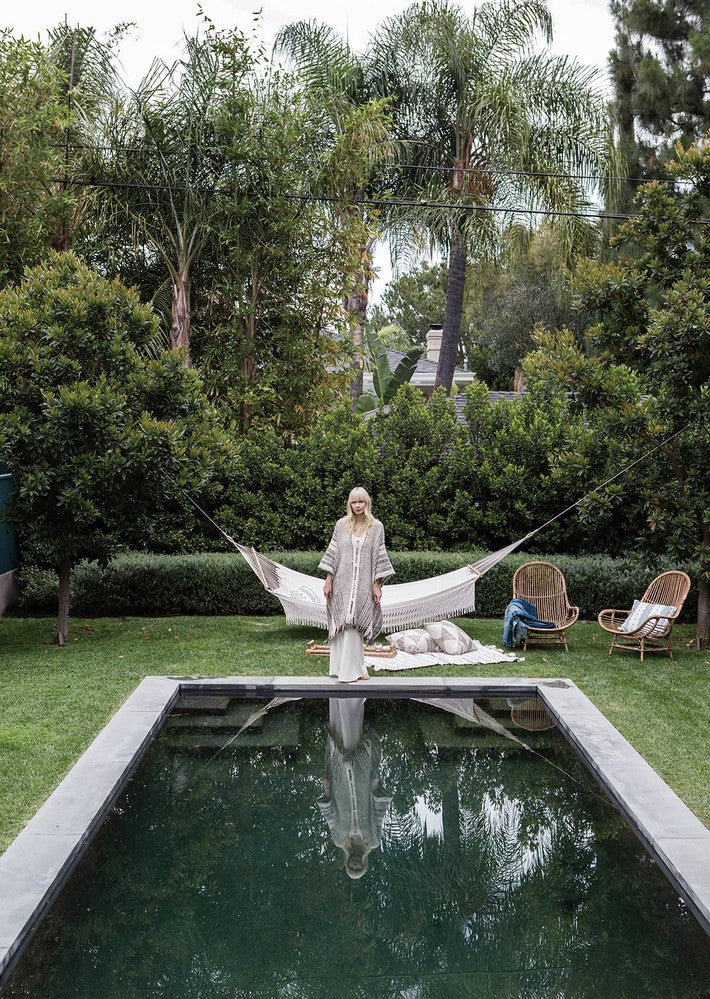 “With each new inhabitant of this house, another layer has been added,” Fetherston says. “It was definitely not a total redo.”

Known in the fashion world for her eponymous clothing line and her highly recognizable signature style (pale blonde hair that crowns an ultra-romantic aesthetic), Erin Fetherston has always telegraphed that look into interiors, too. “My husband [platinum recording artist Gabe Saporta] always joked that my New York apartment was a total fantasy princess palace,” says the designer.

When it came time to start a family last year, a move to Los Angeles felt like a natural step for the couple. Shortly after they began house hunting, they found a 1923 West Hollywood bungalow that was previously owned by a friend. Tucked behind a wall shrouded in greenery on a busy street, the home is the best of two worlds: a “magical oasis with a secret garden, right in the middle of the city,” says Fetherston. Hoping to maintain continuity, Fetherston hired the same landscape designer who originally restored the garden—and added boxwood, ferns, rosemary, white roses, and hydrangea to keep the green and white color scheme.

Departing from her traditional feminine aesthetic, Fetherston approached this space differently following the birth of their son. “I wanted to create something that reflected the whole family. The only pink accents are a few well-placed rose quartz crystals,” she says with a laugh.A visit to Consort Design’s store on Melrose Avenue led Fetherston to co-owner Mat Sanders, who became an invaluable design partner. Consort, known for bold patterns and modern finishes, was challenged to exercise restraint, executing a more neutral palette for Fetherston’s interiors. “Mat could see what I was going for and brought his own twist,” she explains. “He helped me achieve that balance of masculine and feminine.

Fetherston transformed an ottoman into a coffee table, upholstering it with a washable organic mudcloth with a nubby texture. Integrating the nursery with the family living area, she covered toddler-size glider in the same fabric. The finished home feels distinctly personal, as Fetherston custom-created a lot of the decor items herself. Thrilled with the results, she’s launching similar pieces with her collection of soft home goods, including pillows, tablecloths, napkins, and even dog beds, in a pared-down palette of ethereal whites and calming, muted earth tones.

The move to L.A. and Fetherston’s home redesign has invigorated her apparel line, too. This September she’ll revive her namesake label, which was on hold while developing a contemporary collection. “California has influenced the look and feel—there’s now a relaxed elegance,” she says. It includes flowing dresses and sharply tailored separates in white, black and blush tones with hits of citrine. “All my work feels connected to everything here in my home.”

Fetherston’s interiors include many of her own custom creations, plus favorite pieces like a vintage Moroccan rug from Etsy shop THE SUNNY SIDE & Co.

A hand-drawn and laser-cut paper installation created by Fetherston and Sanders lends delicate texture and depth to the nursery wall.

Fetherston loves to use plants instead of artwork to add an organic, sculptural element.

“An all-white palette is chic and modern, but you want to make sure it isn’t too severe,” says Consort’s Mat Sanders (pictured above). Draw out the personality of a white space and create texture with a few of his quick tricks.

1. Add contrast. Usually we rely on color to turn up the volume, but with Erin’s neutral palette, we played with pops of black for contrast, like in the color-blocked Pletz lamps and assorted pottery dressing the mantle.2. Bring in soft color through artwork to help give the eye a break.3. Embrace greenery. Plants instantly warm up a space and make its residents feel better, too. We’re obsessed with rubber plants right now!4. Go rough-hewn. Rugs and pillows with unfinished edges and florals that feel picked straight from the garden will add casual elegance.5. Add depth with tonality. Choose a range of coordinating whites and grays for ceilings, moldings, case goods, and hallways.

production and styling by  KATE BERRY