Leave It to a Teen to Get Rebellious With Her Bookshelf

This 17-year-old encourages writing in the margins. 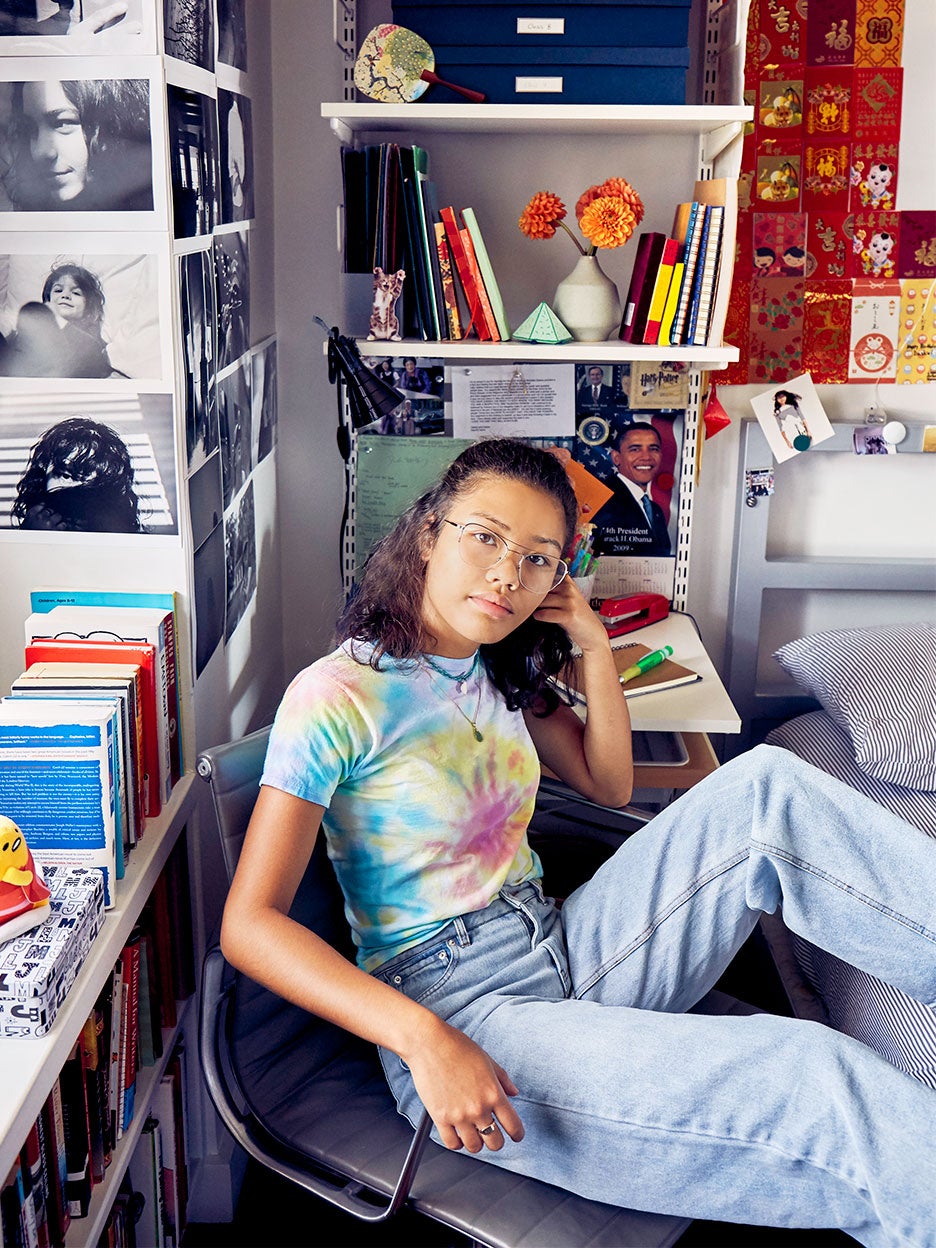 The means of self-expression in a teenage bedroom have stayed pretty constant through the decades: photographs of friends and loved ones lining a mirror; old paper clippings and posters pinned to a wall; scrunchies stacked on sports trophies; and, of course, a bookshelf curated around coming-of-age. For Manhattan-based 17-year-old Dashiel Tao Harris, all those hallmarks make an appearance in her personal space, spotlighting her love of photography and her track-star prowess. But it’s the books that stand out the most.

“I’ve always been a pretty big reader,” says Harris. These days she gravitates toward realistic novels such as Candice Carty-Williams’s Queenie and classics like Toni Morrison’s Beloved, and keeps them tucked neatly on the built-in shelf below her window. Just about to start her senior year of high school, Harris is eager to get back in class—especially her English course focused on the works of James Baldwin. Here, she shares her book-organizing strategy, how she personalizes her desk, and her stance on scribbling notes in the margins. (Hint: It’s not that big a deal.)

The Best Book Club Is Right at Home

I like reading books with my dad and talking about them with him, even though he usually reads faster than me. Right now I’m reading Invisible Man by Ralph Ellison—I mentioned it to him and he told me that he read it when he was younger. Now he wants to read it again. When I’m reading I’ll sometimes go up to him and say, “I just read this really good passage,” and we’ll talk about it. I also like to look at his bookshelf out in the living room—he already owns a lot of books I want to read.

My parents renovated our apartment 10 years ago and the shelf was built then. I have it set up so the books I have read are all on the right side of the shelf, and the books I haven’t read are on the left. Since my room is pretty cluttered, I’ve been going through the books that I’ve read and seeing if I have a strong memory associated with them. If I do, I’ll keep it, but if I don’t, I’ll part ways with it.

The School Books That Stand Out

There are two books I read junior year that really made an impression on me: The Great Gatsby and Beloved. I love how Beloved talks about the Black experience and doesn’t show just one version of it. The book has this supernatural feeling. It discusses things like slavery, but not in a very stereotypical way, and the writing is beautiful. There are some passages that seem really dense—you’re not going to get it the first time around, so you have to go back to it later.

There’s this one line at the end of The Great Gatsby that really stuck out to me: “They were careless people, Tom and Daisy. They smashed up things and creatures, and they retreated back into their money, or their vast carelessness, or whatever it was that kept them together, and let those people clean up the mess they made.” It was the first book where I saw characters were evil, but not in a standard way. It was kind of surprising when Daisy turned out the way she did. It’s interesting how the characters interact with each other—how they express themselves through the conversations they have and their little side jabs.

I take a lot of notes in books—I started doing that a lot more in high school, but I also do it in books I read that are not for school. I’ll just put an underline if I like something, or a squiggle if I really like something. I might also write things like, “Oh my gosh, this is crazy,” or “awesome.” I got into an argument with my friend from camp because she keeps her books pristine—she won’t even earmark them. I was reading this book and she was like, “What are you doing?” I was like, “I’m just writing down some notes.” She was like, “What?! You can’t do that; that’s disrespectful.” I was just like, “Okay…”

Where to Find Book Recommendations

Every year my school sends out a list of recommended summer reading—from the math department to the English department. I’ll look and see if there are any books that spark my interest, and sometimes I’ll ask my friends if they’ve read anything that they could recommend—one of them just gave me this book he really liked called Night Boat to Tangier.

‘Invisible Man’, Vintage Books ($13)
Shop
‘Before You Suffocate Your Own Fool Self’, Riverhead ($16)
Shop

The Books That Stayed With Her

I read Sag Harbor when I was in middle school, and that always stuck with me—part of the reason was that the main character was a person of color going to a predominantly white school, just like me. I loved the storytelling because it felt like real teen life, where your mind goes between past and present seamlessly. White Teeth was the first really big book I read, and that was so good. Before You Suffocate Your Own Fool Self I found from a school list. It’s a bunch of short stories that are either about biracial or Black characters, and most of them are in their teens. I’m biracial and I’d never read a book that expressed some of my feelings about growing up biracial before this one. After I finished it, I just felt really good about myself. When I was younger, I was into the action of a story, but as I’ve gotten older, I really like realistic fiction. It’s great to read about characters who could be real people who you can relate your own experiences to.

A Personal Desk Setup Makes All the Difference

I started taking photography in high school, and I covered the wall next to my desk with pictures I’ve taken with my friends. So if I’m studying or reading or something and I need to take a break, it’s nice to look at the photos, as it’s a little memory because I haven’t seen them in a while. I have a piece of paper on my desk that I wrote my freshman year about how to craft a good essay. I’ve always loved my English teachers. I’ve moved things around on the whiteboard, but President Obama has stayed there for a while. I have a picture of my grandparents, too.

The Book She Recommends to Friends

I bought Rebecca for one of my friends for her birthday. I usually like a book from the start, but when I first started this one I wasn’t really into it. I was like, Okay, this is kind of boring, but I’ll finish it. But eventually I couldn’t stop reading it because I really wanted to know the mystery. I liked all the twists and turns, as well as the descriptions—I could see all the characters and where they were so well.

The Best Place to Read

I usually like reading in bed or on the couch in the living room. Although I can’t do it right now, I also read when I’m on the train or on the bus. I want to start going out to the park some more. I noticed when we go on vacation, I really like reading on the beach—I did that once and it was the best time. I finished half a book in one sitting.

How Her Collection Makes Her Feel

It’s almost like I grew up with these books. Each has a tie to a certain age or a certain feeling that I had at that time—and they also add a little pop to my room because they’re different colors. It’s comforting to be surrounded by books that I have a strong connection to.