In This Bedroom Makeover, the DIY Headboard Doubles as an Art Installation

And it’s in the perfect moody shade. 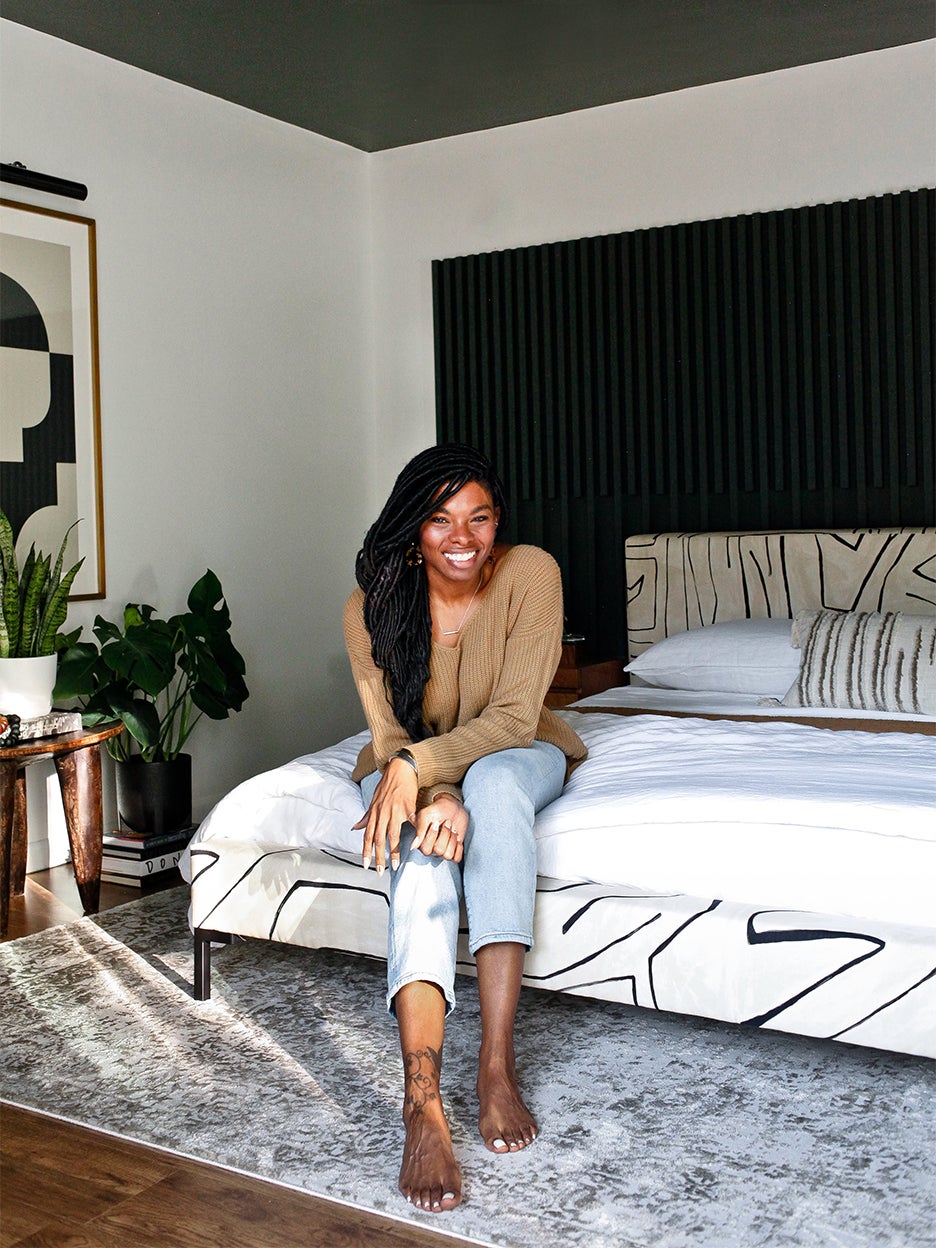 Carmeon Hamilton’s bathroom and bedroom transformation started with one shade: an expressive dark juniper. “Most of the time you see people painting their rooms black [when they are going for moody interiors],” says the Memphis-based founder of Nubi Interiors, “but because of my love of plants, I always lean toward a deep, deep green.”

Hamilton already had the hue lining her bedroom walls pre-remodel, but when the designer found a Tile Shop subway tile in a similar shade, she went into renovation overdrive. “I knew the bathroom would be the most unexpected place to use such a deep color,” she says. “So I let the tile dictate the green that I went with everywhere else.” Where else? The bedroom ceiling (they repainted the walls a bright white), a DIY slatted headboard, the curtains, and a comfy leather reading chair.

Even the most experienced interior designers can take away some new lessons from a project, especially when it’s happening in their own home and over the span of just seven weeks. “It was really eye-opening,” says Hamilton. Here’s what she learned from her two-room makeover.

Don’t Be Afraid to Change Course

Hamilton had planned on installing a big picture window in the bedroom, but after chatting with an interior designer friend, she opted for French doors instead—that way she could easily access the backyard. The opening lets in even more natural light than a window would, plus she now has her next project in line: building a deck.

While it’s certainly fun to pick out paint and duvets, Hamilton says those should be the final decisions. First, focus on the details that aren’t as visible. “Once demo starts, everything hinges upon all of those little things,” she says. “So you’ve picked out a faucet—but what about the valve that goes to that faucet?” Similarly, where would you like your outlets to go? (The contractors need to do the electrical before they put up drywall.) For a smoother process—and, hopefully, less delays—make these choices ahead of time.

Because there wasn’t space to add true architectural detailing to the wall behind the bed, Hamilton brought in dimension with a DIY: an art installation of wood slats (which also acts as a headboard). First, she painted a green rectangle on the wall, then covered it with wood slats in the same shade, spaced one inch apart, using a nail gun. The result is a textural work of genius. “It’s my favorite thing in the room,” she says.

Look to the Office for Inspiration

“I think it was for media and print stuff,” Hamilton says of the vintage piece of office furniture she turned into a chic bathroom vanity. Even so, she saw its potential—so much so that she held onto it for six months because she knew the cane doors and warm finish would eventually perfectly complement the green tile.

One Room at a Time

“I’ve been in interior design for 12 years, but this was the first time I did a space of my own,” says Hamilton. During the reno, she and her husband moved their bed to the living room (they sold their pool table to make space), and their bathroom was MIA for weeks.  “Now that I’ve had this personal experience, moving forward, I’ll tell clients, ‘No, you do not want to do your kitchen and your bathroom at the same time.’”